In a recent article for the online publication CityLab, Brentin Mock (2018b) gives a critical account of the movement for Eagle’s Landing, a proposed city in the suburbs south of Atlanta which he names the “strangest form of white flight.” Proponents of Eagle’s Landing, Mock tells us, seek to redraw municipal boundaries to selectively carve out attractive tranches of “land, people, and properties that already belong to the city of Stockbridge.” Of the many goals of Eagle’s Landing, perhaps the most eye-catching—in both its bizarre specificity and its symptomatic transparency—is the pursuit of prestige retail and dining. Mock quotes a supporter of Eagle’s Landing: “‘I kept seeing all of these places like Bojangle’s, Waffle Houses, dollar stores, and all this going up in our county. And I was like, why can’t we get a Cheesecake Factory, or a P. F. Chang’s or a Houston’s?’ Cheesecake, it would seem, is reason enough ‘for tearing Stockbridge apart’” (Mock 2018b).

Mock levels an understated but devastating critique at the transparent racial politics of the Eagle’s Landing proposal. Relatively obscured, however, in the masterfully heightened absurdity of Mock’s account is that Eagle’s Landing marks a critical moment of departure in Atlanta’s broader history of suburban secession and municipal border struggles. As Donald Trump’s overwhelmingly white coalition of voters has mobilized to stave off perceived threats to white hegemony at the national level, white residents have responded in kind to the perceived threat of racial diversity at the local level. Enzo Traverso (2019) has provocatively termed this multiscalar, reactionary political constellation “postfascism,” a concept intended to locate the rise in far-right movements specific to the 21st century “in a historical sequence implying both continuity and transformation” with the fascism(s) specific to the 20th century (p. 4). This essay analyzes the case of Eagle’s Landing and situates it within Traverso’s postfascist framework.

Spatial constellations and the dialectics of the veil

Two related but conflicting histories characterize Atlanta. On the one hand, the city has long been regarded as an incubator for Black opportunity and racial uplift, a “place where Black dreams are most likely to come true” (Garland 1971). Bolstering this image is Atlanta’s storied history of elite Black colleges, entrepreneurs, politicians, and cultural producers, as well as its large homeowning—and predominantly suburban—Black middle class (DuBois 1903 [1994]; Hankins and Holloway [forthcoming]; Markley et al. 2020; Wiese 2004). On the other hand, Atlanta has always harbored a deep-seated, white spatial politics that perceives visible Black presence as a threat to white health, safety, property values, and community, and thus constantly reinvents new mechanisms for establishing and maintaining white exclusivity. The overdetermined tension between the two has been theorized by Winant (2004) as a “dialectics of the veil.” In the early and mid-20th century, white Atlantans rioted against racial integration, instituted exclusionary zoning ordinances, and equipped their homes with racially restrictive covenants (Godshalk 2006; Lands 2009). And when these technologies proved inadequate or were no longer explicitly enforced by the state, many fled the city altogether (Kruse 2005).

Most of Atlanta’s white suburban places, however, faced further challenges to racial isolation. By the end of the century, tens of thousands of migrants from Mexico and Central America had moved to Atlanta’s northern suburbs. Among other tactics, white-run local governments responded by pursuing gentrification initiatives to replace working-class Hispanic renters with wealthier white residents (Markley 2018). Elsewhere in the metropolis, Atlanta’s two histories have produced a more explicit friction. By the 1970s, a wave of middle-class Black families—mainly from Atlanta and northern (post)industrial cities—began buying homes in the suburbs east and south of the city (Hankins and Holloway [forthcoming]; Wiese 2004). In the decades since, the movement of Black residents to these areas has only accelerated. [1] Most white people there, like their urban counterparts, subsequently fled to other parts of the metropolis. Some who remained instead turned to secessionism—a redrawing of borders via either cityhood (Allums 2017, 2020) or new county formation (Connor 2015)—to ostensibly consolidate resources and decision-making power at the local level. White mobilization to maintain residential exclusivity has, therefore, remained a relative constant in the Atlanta region. However, the specific methods are always changing in articulation with broader political–economic, legal, and/or discursive constellations. Studying these departures on the ground can thus provide a window into how these shifting constellations manifest locally.

The case of Eagle’s Landing, we argue, represents a critical departure from Atlanta’s contemporary suburban secession movements in three major ways. The first is one of politico-juridical technique. Prior to Eagle’s Landing, secessionary movements in Atlanta sought to incorporate portions of unincorporated county territory (Allums 2017, 2019; Connor 2015; Mock 2018a; Rosen 2017). East of Atlanta, for instance, advocates for the proposed cities of Dunwoody, Brookhaven, and LaVista Hills worked to form cities from unincorporated areas of DeKalb County during the late 2000s and early 2010s. Proponents of Eagle’s Landing, in contrast, seek to secede from an existing city—an unprecedented and significantly more controversial project (Mock 2018b). 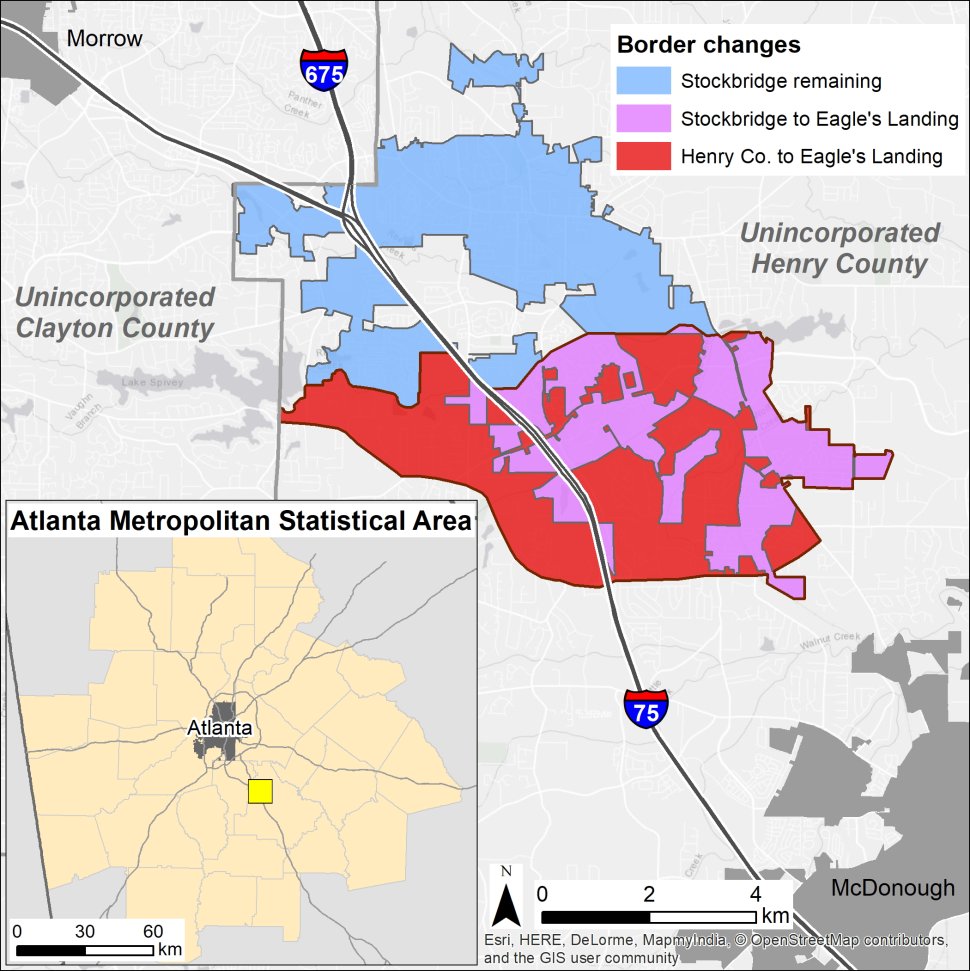 The second way Eagle’s Landing departs from Atlanta’s previous suburban secession efforts concerns the movement’s specific discourse. Where Atlanta’s suburban secession boom since 2005 has been a color-blind, neoliberal phenomenon (Allums 2017; Connor 2015; Rosen 2017) articulated around a broadly conceived politics of growth and interurban competition (Harvey 1989), the movement for Eagle’s Landing coheres around an alternative discourse (Mock 2018b) of racialized decline (viz. “[w]e don’t want [Eagle’s Landing] to go down”) and loss of territorial control (viz. “if [Eagle’s Landing] could happen, we’d have more control of our area, and we’d get to see what comes in here… and what it looks like”).

Finally, unlike other cases, Eagle’s Landing has emerged in response to rapid and significant demographic change in the surrounding area, as many Black families have relocated to Atlanta’s southern suburbs. Indeed, Mock (2018b) writes that the movement for Eagle’s Landing gained traction “just after a black mayor and an all-black city council took office.” Its reactionary politics parallel, in tone and chronology, the historically resurgent white supremacy of the Trumpian right in the United States (see Inwood 2019), as well as the revanchist “social cleansing strategies” that have emerged elsewhere in the Atlanta suburbs (Markley and Allums, [forthcoming]).

At the same time, the Eagle’s Landing movement is not totally distinct. Like all suburban secessionism, it is a project of white democracy (Olson 2004) and (re)territorialization (Allums 2017; Deleuze and Guattari 2009; Fisher 2009). It seeks to fix and concentrate the material advantages of whiteness (Connor 2015; Harris 1993; Lipsitz 2006) in demographically and administratively fractured suburban space. It would result in the further financial and political marginalization of those communities—predominantly communities of color—which fall outside its proposed boundaries and which continue to suffer the strains of divestment and uneven development. And like all cityhood movements in Atlanta, it would exclude from the deliberative process all but those residing within the proposed boundaries of the new city.

Eagle’s Landing represents a decisive ideological and aesthetic reorientation of the secessionist project; it nevertheless extends the material relations and territorial politics of prior movements for suburban secession in Atlanta articulated above. How, then, to account for this conspicuous non-identity, the difference within the repetitive secessionary drive?

Rereading suburban secession: postfascism and the valences of property

In the epilogue to his 1936 essay “The Work of Art in the Age of Mechanical Reproduction,” Walter Benjamin (1968, p. 241) argues that reactionary politics attempt to organize society “without affecting the property structure” and that fascism “sees its salvation in giving these masses not their right, but instead a chance to express themselves.” Herbert Marcuse (1968 [2009]), too, theorizes the relationship between liberalism and reaction as one based in the shared problematic of private property. Liberalism, Marcuse argues, is “characterized as the organization of society through private enterprise on the basis of the recognition of private property and the private initiative of the entrepreneur,” and, despite popular accounts that would seek to draw distinctions between the two, “this very organization remains fundamental” to reactionary politics (p. 6). Indeed, “[w]ith regard to the unity of this economic base, we can say it is liberalism that ‘produces’ the reactionary movement as its own consummation” (p. 13, emphasis added; see Polanyi 2001 and Lennard 2019 for similar accounts).

Marcuse’s insights offer a fruitful way to reread suburban secessionism under contemporary racial capitalism (Robinson 2000). As Cheryl Harris (1993) contends, whiteness under racial capitalism functions as a form of property, thereby conferring material benefits upon its owners. These benefits, however, are contingent upon maintaining the relative value of whiteness. Thus, as Inwood (2019) argues, as the property of whiteness is perceived to be under threat from those who do not possess it, a collective interest among whites to safeguard their property serves as a powerful catalyst for mobilizing reactionary movements (see Taylor 2019 and Markley et al. 2020 for complementary accounts).

The transition from a relatively diverse but white-governed municipality to a Black-marked and -governed place represents a symbolic loss to many of Stockbridge’s white residents. Stockbridge being marked as Black puts the city, in the eyes of Eagle’s Landing boosters, at a distinct disadvantage in the competitive scramble for the crumbs of suburban investment. Short of white flight—which would, by definition, cede the territory over which the Eagle’s Landing struggle is being contested—the answer to such a predicament under neoliberal racial capitalism can only be devising some simulacral technology capable of (re)producing the whiteness of a place. For example, in the Atlanta suburb of Marietta—a municipality that lost its white majority but where whites maintained control over the levers of government—this was achieved through a “social cleansing strategy” that cleared thousands of minority-occupied apartment units (Markley and Allums, [forthcoming]). In Stockbridge, where the city council already reflects the city’s new Black majority, the question of borders structures the racial project: secession via excision becomes the more viable response.

Critically, such emergent expressions of reactionary localism do not represent a rejection of neoliberal urbanism. Rather, in Marcuse’s dialectical fashion, they are products of (neo)liberalism’s fixation on protecting property, which here we understand as always-already racialized. With this perspective, we can reimagine the effort to secede from Stockbridge as a particular, neoliberally inflected reaction to racial change, a postfascist (Traverso 2019) sublation of the neoliberal order which has dominated suburban secession in Atlanta for over a decade.