Skip to main content
The Guggenheim Museum and the banks of the Nervión in Bilbao, Spain © François Daune
Series

The Renewed Relevance of Urban-Planning Models?

Claire Carriou & Olivier Ratouis & translated by Oliver Waine - 30 June 2015
Lire en français
While the register of the model has complemented urban planning ever since the concept emerged, such models have gradually appeared to be less relevant. More recently, however, they have been making a comeback in debates between experts, professionals and researchers in the fields of urban planning and policy. In this series of articles, we aim not just to examine the latest ideas and knowledge that influence urban-planning practices, but also to reflect upon contemporary trends in the production of the city and consider the possibility of a return to the model-based planning.
▼ Jump to the list of articles in this series ▼

At a time when the world’s major emerging countries are becoming urbanised at a rapid pace and “old nations” are reforming their concepts and perceptions of the city in light of the imperatives of sustainability, we feel it is necessary to examine the ideas and knowledge that influence urban-planning practices. Whether by coincidence or consequence, ever more calls for planning models have been observed in recent years. Experts, professionals and researchers alike are today involved in debates on ideas relating to urban-planning models. With this in mind, we have sought to instigate a process of reflection through this series of articles, on the one hand observing the trends that have emerged in various situations and, on the other, calling into question the relationship between model and project in the production of the contemporary city.

In this context, models are nothing new, an indeed have gone hand in hand with urbanism and planning ever since the concept of town and country planning emerged at the turn of the 20th century. For a long time, urban planning has applied “objectivised” and reasoned action to spaces as a means of transforming not just society but also the way society is organised. The importance accorded to the model in this context has had a structural effect on society and reflects the founding principles that, to varying degrees, have constituted the field of urban planning: reformatory intentions that in some cases tend towards the utopian; the ambition of applying scientific reasoning to action affecting the city; and, lastly, the fundamental belief in the transformative power that space can have on society. These guiding principles have lent an exemplary dimension to the various theories developed and experiments conducted, with the aim that they should be reproducible and normative. They have profoundly marked the different approaches and doctrines of urban planning (Choay 1965), “progressist” and “culturalist” alike, to use the categories established by Françoise Choay. The post-war boom decades – the famous Trente Glorieuses in France – were without doubt the heyday of this rationale, typified by the rational planning model, which combined science, action and prediction (Friedman 1987). Later, however, the subsequent shift towards virulent criticism of functionalist urban planning and its attendant positivism served to challenge development models founded on the kind of rationalism associated with a certain political and professional will. Is it at this time that the idea of the “urban project” – which has become so widespread since the 1980s – initially emerged (Rossi 1966). In contrast to functionalist approaches, this concept favoured development approaches that were adapted to the specific and historic features of a given territory, by implementing new governance methods based on negotiation and cooperation between stakeholders. 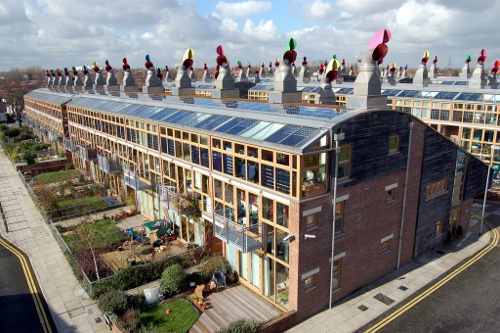 The BedZED eco-neighbourhood in the southern suburbs of London, UK (cc) Tom Chance/Flickr

Since then, it would appear that planning models have been pushed to sidelines of experts’ and professionals’ thinking regarding the city – or have even disappeared completely. But the recent return of the vocabulary and register of the model among planning experts and professionals seems to bear witness to something of a reassessment of methods and ideas. Bearing in mind the historical context, however, the positions adopted are contrasting to say the least. Alongside practices that remain closely aligned to the criticism of models, we can also observe dynamics of homogenisation – standardisation even – particularly in connection with “neoliberal” approaches (Harvey 1989). Certain developments deemed to be references in their field are diffused and disseminated, and urban-planning “recipes” are extrapolated from emblematic experiments (e.g. Barcelona for sporting events or Bilbao for culture), destined to be reproduced elsewhere. Catalogues of “best practices” are implemented in eco-neighbourhoods and sustainable urban-planning operations. Charters and guidelines can give the impression of being new forms of rationalisation, and culminate in the introduction and imposition of norms and standards. Finally, new technologies are opening the way towards the digital modelling of the cities of the future. With all this in mind, is it accurate to say that we are seeing a return to model-based planning? And, if so, what exactly are the models in question, and what do they focus on – methods, theoretical content, the stakeholders involved in producing the city, forms of governance…? More importantly, how do they achieve this, and what are the dominant features of these models? Various alternative stances in the field of urban planning are being formulated and fine-tuned. In these cases, planning seems to be affected by an ever-present conflict between normativity – which often corresponds to the reproduction of urban-planning “success stories” – and the search for tailored, negotiated approaches – which fits in more with the tradition of the urban project.

By addressing these questions, this series of articles seeks to investigate the possible return to models in urban planning and the ways in which this is happening, based on observations in the field, analyses of discourses, and studies of planning professionals.

Dissemination and transfer of knowledge

Professional practices: between reproduction and invention