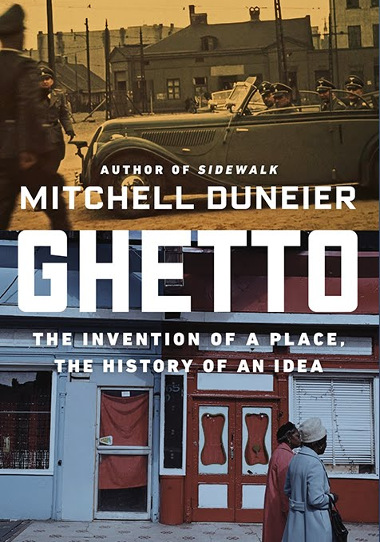 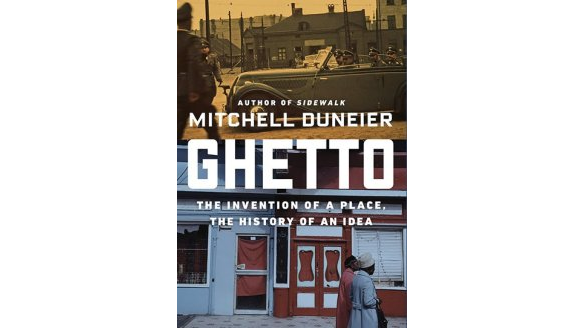 William Helmreich - 13 December 2016
As we contemplate an era marked by official hostility to fair-housing laws, we would do well to heed the distinction between forced and voluntary segregation. Tracing the construction—both literal and cultural—of the ghetto, Mitchell Duneier’s new book is a sensitive guide to the scholarship and history of Jews’ and Blacks’ intersecting paths through it. William Helmreich reads and reviews the work through his own reflections on contemporary New York City.
Reviewed: Mitchell Duneier, Ghetto: The Invention of a Place, the History of an Idea, New York: Farrar, Straus and Giroux, 2016, 292 pp.
ghetto / gentrification / segregation / racism / discrimination / minorities / race / ghettoization / race relations / United States / New York
Download PDF

In today’s world, the word ghetto is seen in highly negative terms. It is associated with failure, isolation, and the stigmatization of minorities. The significance of this is critical if we are to understand prejudice, race relations, and how states successfully define, control, and discriminate against oppressed peoples. Following a line of sociologists, from W. E. B. Du Bois to William Julius Wilson, Mitchell Duneier’s account connects the Black and Jewish experience through the ghetto, and in so doing reveals how minority groups have been stigmatized in and through those spaces through history.

Duneier’s account both ties together the religious justifications of the ghetto in medieval and Renaissance Europe with the racial justifications of the modern United States. For the former, the architectural glories of the Church contrasted with “the squalor of the ghetto[, which] was viewed not as the direct consequence of discrimination and forced overpopulation, but as the natural state and deserved fate of those who had betrayed Christ.” For the latter, shabby, poverty-stricken neighborhoods populated by Blacks and Latinos were evidence of residents’ inability to succeed.

Yet Duneier also argues convincingly against figures such as Louis Wirth, who claimed that the connection between medieval Europe and the Nazis’ forcing Jews into ghettos was continuous. Instead, Nazis both racialized—and desacralized—the relegation of Jews to ghettos and saw them as places where Jews were doomed to eventual death, unable to be saved by conversion. Turning his attention to the contemporary US setting, Duneier carefully dismantles the idea that Black ghettoization is voluntary. He points to the ways that Blacks who tried to move into white areas faced restrictive covenants, discriminatory real-estate practices, and violence as the police stood by and did nothing. At the same time, Duneier also notes that not all segregation is involuntary, but, even when it is, it can strengthen culture and maintain identity. It would therefore be a mistake to see discrimination as being seminal to identity.

In New York City, for example, some neighborhoods, like Ditmas Park in Brooklyn or Manhattan’s West Village and West Harlem, are integrated, while others, like Cambria Heights in Queens or Flatlands in Brooklyn, are largely middle-class and quite safe, and overwhelmingly Black. The key issue today isn’t separate or integrated, but being able to freely decide which option to choose. And, as Duneier, Horace Cayton, and Elijah Anderson have all noted, Blacks often prefer each other’s company, yet still resent being rejected. This was clear to me in my own work, walking the 121,000 New York City blocks for The New York Nobody Knows (2013) and The Brooklyn Nobody Knows (2016). One set of communities resembled Chicago’s ghettos. These were Brownsville and East New York in Brooklyn; South Jamaica, Queens; the South/Central Bronx; and Mariners Harbor in Staten Island. Poor and largely ignored by the city, they are the violent and dangerous parts of Gotham. The writings of Richard Alba, Philip Kasinitz, and Nancy Foner also remind us of how wide a gap there is between these impoverished parts of the Black community and the rest of America.

Yet despite its liberal self-image and the perception of it as a place where people from every country mingle, New York remains a highly segregated city. You can walk for miles in safe, middle-class neighborhoods like Cambria Heights, Queens, and Flatlands and East Flatbush, Brooklyn, and see almost no one who isn’t Black. When I spoke with people there, I learned that their decision to live there was motivated by a desire to be with their own people socially, to have friends with whom they were completely comfortable, stores where they could find the items they wanted. They knew they could live in largely white communities, but they didn’t want to. A good number of these people were from Haiti and the West Indies, people who didn’t have the history of racism and discrimination that was so true for African Americans.

Duneier notes that even as Blacks became more educated, they remained apart residentially, as whites fled the cities of the North and created separate white enclaves in the suburbs. Leaders from Kenneth Clark to Malcolm X (Duneier astutely evaluates the fascinating relationship between these two men) argued that Blacks needed to “divest” from their often patronizing white allies and focus on their own institutions, even as thinkers in the 1960s, like Nathan Glazer and Daniel Patrick Moynihan, tended to focus on particular failing institutions rather than the cumulative institutional failures that set policy for Black people apart relative to poor whites.

By the 1980s, William Julius Wilson, author of The Declining Significance of Race (1978) and The Truly Disadvantaged (1987), argued that race had gradually been replaced by class as the major challenge facing the Black community. He asserted that one third of the Black community was in “the underclass” and that large numbers of upwardly mobile Blacks had moved out of America’s ghettos. The solution lay in better jobs and education. Cynical of the good intentions of whites, Wilson argued that improving opportunities for both whites and Blacks was the solution. Noting that Wilson’s work was rooted in Chicago, Duneier contrasts it with Geoffrey Canada’s efforts to build community institutions in and for Harlem residents in New York.

Duneier concludes by returning to the comparison of Jewish and Black ghettos, and argues that both the ghettos of Venice and pre-war Poland were flourishing centers of life and that the early ghettos in the Black community were vibrant too. The later Nazi ghettos were simply waystations on the road to extermination and the Black ghettos today are places were Blacks are isolated and treated as populations that must be controlled. Duneier argues that these and other differences make it impossible to equate the hardships faced by either group or their responses to these hardships.

Ghetto draws primarily upon the research done in Chicago and New York City, but the book’s primary focus is on what Wilson, Clark, and Drake and Cayton did with the idea of the ghetto in different historical moments. Building on Mario Small’s work, Duneier notes that what’s missing is a full-blown systematic analysis of how ghettos differed across time and space. Chicago is a city where large swathes of the Black population, especially on the South Side, are mired in poverty and where crime and gang activity are major problems. As of November, there have been more than 600 murders in the Windy City, a 45% increase from the previous year. It is not the only such city—Houston and Baltimore come to mind as well—but it is the most striking example. Other cities like New York and Los Angeles have experienced very significant declines in crime, suggesting real variation in the national picture. In fact, New York, with a far larger population than that of Chicago, has a murder rate now hovering around 300 per year.

Similarly, in contrast to Chicago, New York rarely destroys housing projects, even really bad ones like the Louis Pink Houses in East New York. As Nicholas Dagen Bloom has pointed out in his book, Public Housing That Worked: New York in the Twentieth Century, the city as a matter of policy doesn’t tear down projects; it rehabs the apartments in them. Despite persistent rumors that projects will be knocked down or parcels will be sold and made available to gentrifiers, it hasn’t happened. Nor have gentrifiers been afraid to live near New York City Housing Authority buildings. This entire topic, and especially its ramifications for all parties, could easily be the subject of an entire book, but it suggests that New York’s public housing has been less stigmatized and less ghettoized as a whole than Chicago’s, and provides another end of a continuum on which other cities’ ghettos might be assessed.

If Duneier does not highlight the large differences among US ghettos, his work suggests some interesting comparisons and cross-pollination of writers and sites as well as across time. Geoffrey Canada’s focus on violence in the South Bronx and Harlem from the 1970s to the 1990s might be more comparable to Chicago’s South Side now. The South Bronx today is the latest hot site for gentrification in New York. Similarly, Kenneth Clark’s work on the ghetto as a colonizing society, with Harlem as a backdrop, is clearly out of date, with Harlem half-white. And “colonizing” today means something entirely different. It refers to large numbers of whites moving into formerly Black areas. One of the reasons it’s happening in Harlem is that the population density and easy transportation within Manhattan make it so easy. Regardless, none of this happened 50 or 60 years ago because social conditions wouldn’t have allowed it to. But what Clark wrote about oppressed communities is still very true in Chicago where the dynamic has evolved in a very different way.

Ghetto is a thoughtful, engaging, and very important book that deftly employs history and sociology and a comparison of two persecuted groups to make its larger points about Black relations with whites in general. But it is the latter relationships, as seen the through the eyes of some of the greatest scholars in social science, that makes this volume a singular contribution to the field. Brilliantly argued and examined, it will become a classic in the field and easily withstand the test of time.