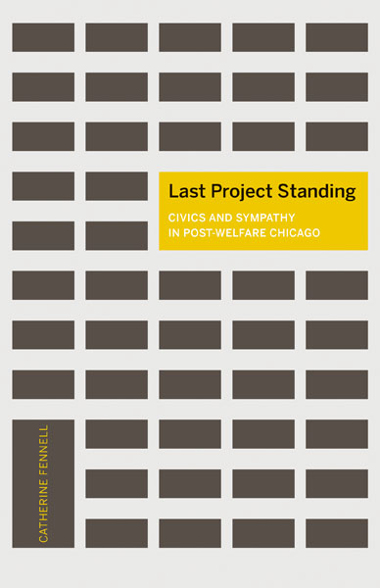 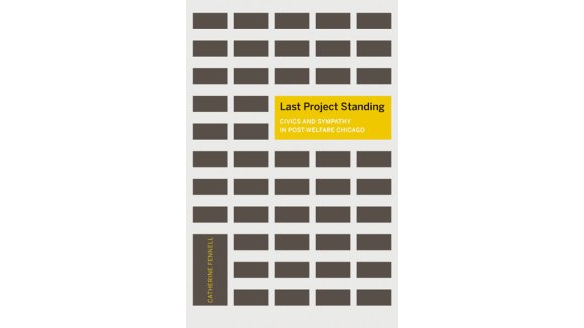 Early in Catherine Fennell’s new book, Last Project Standing: Civics and Sympathy in Post-Welfare Chicago, Fennell is invited into the apartment of one of her respondents. The two women enter and the physical decay is immediately apparent:

[The] door hung in a frame that pitched to the right so it fell open, again and again. Martha eventually managed to coax the door shut while muttering through the list of repairs that her landlord had still not made. As she pointed to a loosening light fixture and stamped on softening floorboard, she vowed that she would “open” her apartment for “everyone to see.” “I’ll put it on Good Morning America,” Martha insisted, “and ABC.”

Martha’s need to make her substandard housing visible to the world is mirrored in Fennell’s approach to describing public-housing buildings, the Chicago Housing Authority (CHA)’s strategy for redevelopment, and the ways that the welfare (or post-welfare) state goes about providing and caring for its poorest citizens. Beyond simply pointing to the damage, what both Martha and Fennell aim for is a revealing: a public presentation of the facts and a reorientation of responsibility. Martha is not ashamed of her crumbling apartment. Rather, she wants to invite in the news media and display the brokenness as an indictment of what poor people must settle for. By welcoming cameras—and by extension, all of middle-class America—into her home, she hopes that viewers will acknowledge that they wouldn’t want to live in such conditions and understand that she doesn’t either. Last Project Standing dwells on this question by asking about what strategies might “compel a range of urbanites to feel a likeness to the people and things around them and how, in the process (…) to think, argue, and act differently about public housing and poverty” (p. 32).

This “range of urbanites” is brought progressively into contact with the Henry Horner CHA project as the book moves from the center out. Last Project Standing begins with the deteriorating public-housing buildings and those who live there, at a moment when the Horner Homes are being “redeveloped” into a mixed-income complex called Westhaven. It then widens to include the social-service agencies and charities that work with public-housing residents, delivering services that the housing authority has stopped providing. Finally, the narrative expands to encompass those outside of public housing in a final chapter about the planning of a national public-housing museum that considers how non-residents can be brought to view CHA buildings, their inhabitants, and their history. Though Fennell ends her decade of research before the launch of the museum, this final remove is crucial to the argument that public housing is not just about or for its residents. Rather, public housing and its institutional as well as physical demise implicate an entire democratic society. 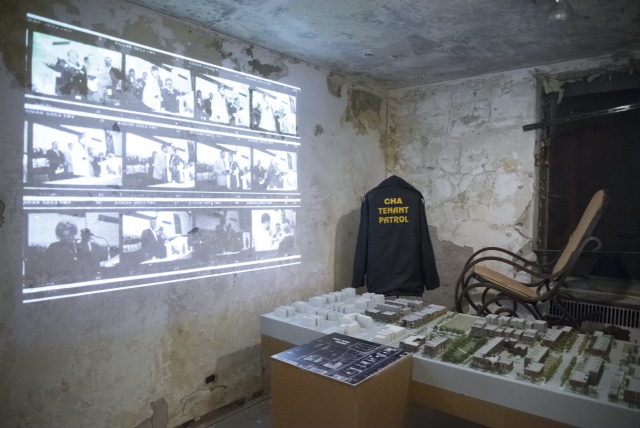 Fennell’s project is to “understand how and with what effects urban planning initiatives had become pulled into the thorny politics of distributing the care of poor people across a network of municipal, private, and non-government entities” (p. 57). The endeavor is at its most vivid in the book’s third chapter, “Project Heat and Sensory Politics.” Here, she writes about how the always-on heat provided through the CHA’s boiler system created heat addicts who craved the intense “project heat” and oriented their lives around it. When the Henry Horner buildings were redeveloped into a mixed-income complex, that heat was taken away, and instead all units were given individual temperature controls—and, consequentially, individual heating bills. Fennell explores how the move from from the centralized heat delivery to household management was intended to “restore to residents the rights and pleasures of making their own choices about their own care” (p. 105). The trope of self-management is employed by CHA redevelopment planners as they claim that the household-controlled heat will be healthier—free from oppressive overheated conditions that drove children to emergency rooms—while simultaneously teaching residents how to pay utilities, be responsible for their bills, and ultimately manage the trade-offs between the physical pleasure of intense heat and the price of such comfort. The fact that many residents ended up with heating bills far exceeding their ability to pay illustrates the tensions between care and collective responsibility for the poor (which characterized the welfare state of the mid-20th century) and the initiatives to teach self-discipline that typify the “post-welfare” paradigm that dominates current political practice.

The politics of sympathy

Heat also opens up a discussion woven throughout Last Project Standing about the way encounters with physical things (such as buildings or heated air) create what Fennell describes as sympathy, “the capacity to extend feelings, qualities, and visceral states across very different entities” (p. 7). The explanation of this concept is somewhat muddy and hard to follow—a clearer definition would enhance this book’s theoretical contribution—but, even so, the argument Fennell is making is well articulated: the ability of people to feel for and feel with public-housing residents is the mechanism for breaking down divisions between the poor and the comfortable, as “sympathetic bonds forged between building and bodies chipped away at the antipathies that people (…) held towards public-housing residents” (p. 74). In one instance, Fennell tells the story of a foundation-program officer attending a meeting in an apartment-turned-office in a Chicago Housing Authority building. Bundled up in the very cold winter, the visitor quickly became overwhelmed by the boiling heat in the building. Dizzy and enervated, she was distraught by the thought of letting parents raise children in such uncomfortable conditions and made public-housing redevelopment a funding priority at her foundation.

Haywire heat is a complicated type of brokenness in that it is both a malfunction and a pleasure (“summer in wintertime”). The decay of the buildings themselves—the decay that Martha wanted to show on national television—is less so. Last Project Standing uses this sort of physical breakdown not to lay blame on insufficient funding and inadequate building management, but to further the argument that the buildings themselves can both change how people move and foster sympathy. Consider the use of concrete as a key building material in Chicago’s projects. Concrete settles and cracks, handrails come loose. Maintenance workers fail to replace light bulbs, and while the residents Fennell befriends generally avoid the stairs, they must use them when the elevators are out of service, always carrying flashlights and avoiding the unpredictable railings in order to avoid falling in the dark stairwells full of trash and broken glass. The buildings’ decay directed how residents moved through them, “and because handrails happened to be governed by building codes, broken handrails could support arguments about dangers posed to residents. But for such arguments to resonate beyond Horner, sympathetic links between unsteady handrails and unsteadied bodies needed to be forged and recognized within institutions tasked with keeping handrails steady” (p. 83).

These discussions of sympathy and feeling operate on a different level from most scholarship on public housing. Fennell’s anthropological detour is possible because of the well-established literature documenting the tragedy of public housing in the United States, particularly in Chicago. The racialization of public housing forms an essential base layer, from Myerson and Banfield’s depiction (1955) of politicians and planners creating a segregated CHA to the tensions between poor and privileged African Americans in Patillo’s Black on the Block (2007). These works, along with ethnographic writing that highlights the otherness of inner-city and public-housing residents (such as Anderson’s Code of the Street (1999) and Venkatesh’s Off The Books (2009)), identify public housing as a social infrastructure that can be neglected and denigrated with little political consequence. Prior scholarship provides a crucial platform for Last Project Standing, because the argument for sympathy that Fennell makes rests on an assumed understanding of a history of neglect. Though Fennell does not delve deeply into this history, she does discuss how the concept of “de facto demolition”—the understanding that neglecting maintenance was having the same effect as actively destroying buildings—was marshaled in the 1980s to require public-housing authorities to take responsibility for their buildings’ ill repair.

The idea of de facto demolition was raised in court cases that led to the requirement that public-housing authorities both get approval from HUD [1] for all demolition and replace every destroyed unit with another apartment. However, federal funding for public housing has severely declined, leaving local housing authorities with gaping deficits and buildings they cannot afford to maintain. For instance, the New York City Housing Authority (NYCHA) has a deficit of $98 million and $16 billion in unfunded capital needs (Navarro 2015). One strategy to raise some of this cash was the subject of a recent New York Times article: “Public Housing, Private Donors” (Bellafante 2016) reported on the creation of a parks-conservancy-like nonprofit, the Fund for Public Housing, seeking private donations for the NYCHA to make up for years of disinvestment and billions of dollars of deficit. In this first year they are seeking a mere $200,000. That is: private donations to fix handrails. The article notes that, in New York, well-off neighbors in Chelsea and Fort Greene have an “intimate view” of the projects and public-housing residents, and thus might be inclined to support NYCHA. Fennell would argue that if these neighbors could be made to feel with their public-housing neighbors, rather than just see them, such a strategy might have a chance at success. But $200,000 is peanuts, and, even if it weren’t, pinning hopes for NYCHA’s solvency on the willingness of wealthy neighbors to contribute seems to be a desire for the sort of individualized “responsible behavior” that is one of neoliberalism’s hallmarks. If sympathy is the mechanism for a more caring approach to America’s poor, we need to ask how sympathy can be mobilized in the service of structural change.