The Resurgence of Towers in European Cities

Manuel Appert & translated by Oliver Waine - 19 February 2016
Lire en français
After a fallow period during which very few towers were built (1980–2000), European cities are currently experiencing a renewed enthusiasm for this architectural and urban form. While the resurgence of skyscrapers has, to date, been somewhat timid in France, it has reached unprecedented proportions in a significant number of other European countries, reflecting as much a change in economic and political contexts as the persistence of certain representations.
▼ Jump to the list of articles in this series ▼

In the Paris region, skyscrapers have generally been accepted without controversy, as long as they have been confined to the business district of La Défense, two miles west of the city boundary. However, the recent proposal to build the Triangle Tower on the south-western edge of Paris proper, in the city’s 15th arrondissement, [1] has brought Parisians’ sensitivities regarding tall buildings back to the fore. This project, like the new courthouse complex under construction in the Batignolles district, in the 17th arrondissement, [2] has become the epicentre of a saga whose impact in the media reveals a new politicization of the debate on towers in the French capital. Although party-political posturing has structured certain positions among Paris city council members, debates have been steered rather by collective mobilizations at a variety of scales, attesting to a growing expertise among actors and stakeholders, whether professionals, local authorities, academics or associations. Though a sensitive subject today, and no doubt also in the future, given the ever-increasing number of proposals for skyscraper projects, it is nonetheless not a new issue: discussions, controversies and debates (Urbanisme 2007; Paquot 2008; Taillandier et al. 2009; SKYLINE project [3]) have resurfaced with each vertical addition to Paris (e.g. the Montparnasse Tower, the Front de Seine district).

This time, however, tens of projects have been emerging, not just in Paris but also in other French cities, since the 2000s. If we take a look back over the previous decade, for example, we see that it was in fact the Euralille business district in Lille that heralded tall buildings’ return to grace in urban projects. Marseille and Lyon have both recently given the green light to towers that form part of the urban renewal of districts in decline whose image began to deteriorate at a time when competition between European cities started to increase (Euroméditerranée in Marseille and La Part‑Dieu in Lyon).

The unprecedented verticalization of European cities

But in order to fully appreciate the extent of this phenomenon, we have to look beyond France’s borders, and in particular towards cities like London, Rotterdam, Barcelona, Madrid, Vienna, Berlin, Milan, Turin and Warsaw. These cases show that the resurgence of skyscrapers that began in the early 2000s is a major phenomenon, in terms of both the duration and the number of towers built. For example, in Greater London alone, the SKYLINE project noted some 342 tower projects that were proposed, approved or under construction as of 1 January 2015. In Madrid, in addition to AZCA, the Chamartín district has become home to the eponymous four towers of the Cuatro Torres Business Area, while Barcelona has undertaken vertical urban renewal operations at Fira de Barcelona (around Gran Via) and Diagonal Mar.

On the other side of the Alps, Milan has been gracing the covers of specialist journals following the construction of the Bosco Verticale and the new headquarters of Lombardy Regional Council, while Turin rolled out the red carpet for banking group Intesa Sanpaolo’s new tower.

Figure 1. The residential verticalization of Vauxhall in south London 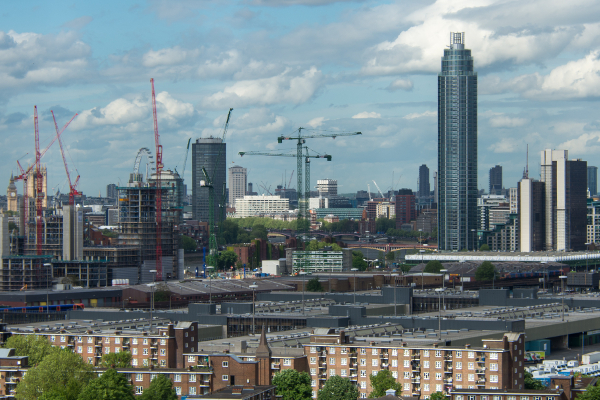 Figure 2. Torre Intesa Sanpaolo against the backdrop of the Alps in Turin 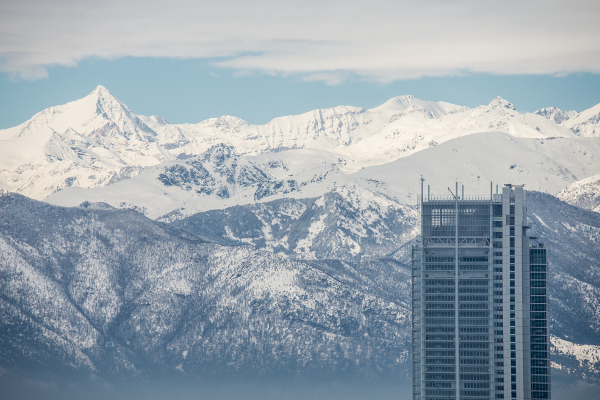 European cities – and by “cities”, we mean all the public and private stakeholders who play a role in urban production – are in fact responding to a global pressure to verticalize (McNeill 2005; Didelon 2010). Moreover, towers have become one of the architectural tools of a continuous urbanization, of a metropolization of functions and workers in the context of globalization and, more broadly speaking, of a rise in importance of market players in the production of the city. More recently, however, following the example estabished in Asian cities, there has been massive growth in the number of residential towers, to the extent that they now represent the vast majority of tall buildings built throughout the world, including in Europe.

A debate structured around three sources of tension

The multiplication of towers in Europe is a source of debate, both in academia and in society more generally, in which viewpoints are often black or white, corresponding to tension between opposing pairs such as supply versus demand for available floor space, densification versus urban sprawl, and economic development versus preserving the city’s identity. These oppositions often implicitly reflect links between economic rationales, materialism and collective imagery, the latter of which remain very much present in the interpretation of towers above all as a cultural and political product.

An exploration of the first pair of arguments reveals that towers do not necessarily respond to an expressed demand, in that business premises and housing can be provided at lower cost (in terms of both construction and end use) in lower-rise buildings. Towers can, however, help stimulate niche markets by exceptionally increasing land and real-estate values in spaces targeted by urban regeneration operations. Economic arguments can therefore only be envisaged by considering the symbolism of skyscrapers and the prestige associated with them (McNeill 2005; Appert 2011). Indeed, it is because of the monetary value accorded to this prestige that towers help to secure the capital flows that circulate between cities (Graham 2015).

Figure 3. Construction of the ECB tower in Frankfurt 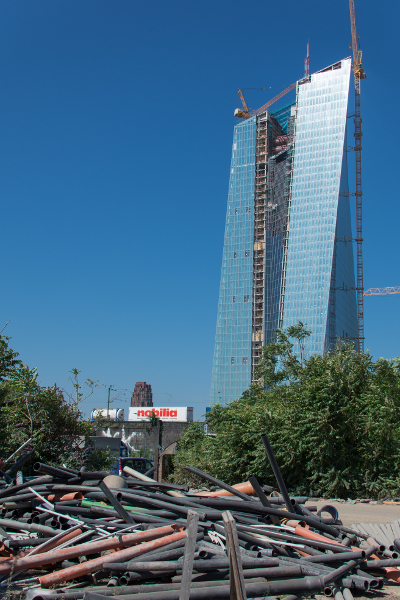 Towers can also be considered a lever for minimizing urban sprawl and the associated mobility needs. Here too, discussion of this argument arises in particular because of the scales at which density is considered. The question of increasing density in the context of European cities is envisageable only on a large scale – and provided that legislation concerning the right to light does not place excessive restrictions on the proximity of towers to existing buildings and to other towers. At this kind of scale, towers help increase the amount of free space on the ground. On smaller scales, the densities offered by groups of towers is not necessarily higher than those found in the Haussmann-style neighbourhoods typical of Paris (characterized by six- or seven-storey apartment buildings that front on to the street), or the blocks of buildings (of similar heights) found in recent zones d’aménagement concerté (mixed development zones) in France.

Figure 4. The Leadenhall Building (“The Cheesegrater”) in London 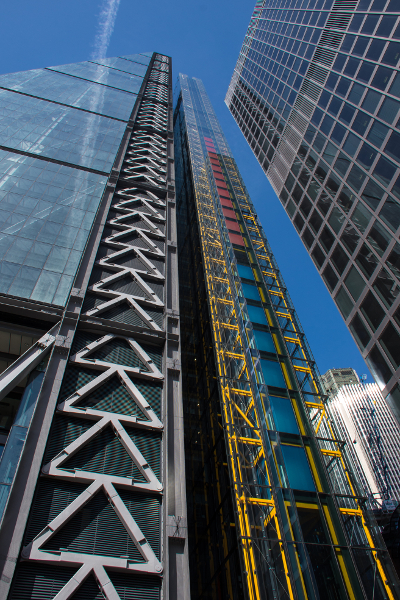 Lastly, opposition between modernity and preserving heritage does not always make it possible o realize the instrumentalization of urban contexts in the staging of projects for tall buildings or understand the granting of heritage protection for towers, including those on social-housing estates.

In casting a critical eye on the return of towers to Europe, we propose to move beyond binary oppositions by putting the production and delivery of contemporary towers into context in temporal and spatial terms. Against the backdrop of broad political consensus on the need to densify cities and adapt urban territories to the competition in order to attract private investment, towers are once again finding a certain legitimacy, including in Europe. They are synonymous with maximizing land use for residential and commercial functions and – when they are located close to public-transport hubs – with beacons of network centrality and signs of urban intensification. It is often in the name of these characteristics that city councils have been authorizing their construction since the late 1990s (Appert 2008; Tavernor and Gassner 2010).

However, owing to their architectural characteristics and the one-time urban intensification that they generate, they act as symbols of urban and/or political renewal (McNeill 2005; Appert 2008, 2011) while at the same time exerting great pressure on urban technical systems and resources. Through their prominence, they also induce major impacts on the landscape, making them some of the most widely contested buildings, at a time when the landscape is a key element in winning over local populations when it comes to urban projects. In European cities, opposition to towers has become more organized and more widespread: not just London (Appert and Drozdz 2010) and Paris (d’Aboville 2015), but also in Seville, Vienna, Barcelona, Geneva and even St Petersburg are concerned (Dixon 2009). In addition to the impacts on the landscape, it is the identities of these cities, the rejection of the symbols conveyed by tall buildings, and more generally the absence of inclusive political projects that involve resident populations that are typically at the heart of contestations. With this series of articles, our aim is to present a multifaceted view of the verticalization of cities and to contribute to the debate –which all too often descends into caricature – on the socio-economic, political and landscape issues at stake in connection with towers in the contemporary city. While its focus is primarily on European cities, an additional perspective is provided by insights into more distant cities that have been subject to more rapid verticalization.

[1] Translator’s note: the 15th arrondissement (administrative district) of Paris lies in the south-west of the city. It extends southwards from the Eiffel Tower and Montparnasse Tower to the Périphérique ring road, and includes (generally affluent) neighbourhoods such as Vaugirard, Grenelle, Javel and Porte de Versailles – the proposed site of the Triangle Tower. The 15th arrondissement is also already home to a number of towers in the Beaugrenelle/Front de Seine district (between Grenelle and the River Seine), developed as a deck-access neighbourhood in the 1970s.

[2] Translator’s note: the 17th arrondissement lies in the north-west of the city. It extends north-eastwards from the Arc de Triomphe to the Périphérique, and includes affluent neighbourhoods such as Les Ternes, Monceau and Les Batignolles, as well as the more middle-class neighbourhood of Les Épinettes.

[3] SKYLINE is a research project financed by the French National Research Agency (ANR) over the period 2012–2016. It is a project of an exploratory, collaborative and comparative nature focusing on the political, economic and social stakes of an increasingly contested dimension of the urban landscape, namely the skyline. This project is justified by the growing number of conflicts in European cities centred on the impact of towers on the landscape. Within the context of sustainable development, its key objective is to construct the principles of governance relating to this ever more controversial dimension of the urban landscape in London, Paris and Lyon. For more information (in French), see: http://recherche.univ-lyon2.fr/skyline/wordpress/?page_id=98.