The Political Aesthetics of Drag

Drag is tied to gender impersonation and crossing, but it is also more than these things. It is also a form of social critique and a genre for aesthetic expression. In this way, it shares qualities with performance art, although drag emerges from specifically queer cultural histories. German scholar Renate Lorenz (2010, p. 23) uses the term “radical drag” to describe drag that works with, but does not endorse, gender binaries.

Cities have their own unique drag ecologies—local stars, traditions, chosen families, and tensions. There’s glamour and glitter, but also the sharp edges of punk and the abstractions of conceptual art. For the last several years, I have been engaged in a multi-sited ethnographic project about drag, one that looks to artists and activists who use it to communicate political and aesthetic ideas. The ethnographic portraits that form the basis of the project come from New York City, Israel/Palestine, and Berlin, sites linked in both obvious and not so obvious ways, including by violent conflicts related to class stratification, ethno-national belonging, and racial antipathy.

One of the artists and activists I worked with in Berlin cuts across two of these sites. Liad Hussein Kantorowicz has been based in Berlin since 2011, but was born and lived in Israel/Palestine until age 11, when her parents left for the US for political reasons. She returned in 2000 at the onset of the Second Intifada and threw herself into the overlapping worlds of art-making, activism, and queer world-building. A founding member of the group Anarchists Against the Wall, she helped introduce the words “queer” and “sex work” into Israeli political discourse. Like many young, left-leaning Israelis, she emigrated to Berlin because its anything-goes attitude represented a welcome respite from political burnout and the difficulties of life in Israel/Palestine. Berlin remains popular among the global, budget-conscious creative class, though this influx has also resulted in troubling gentrification. Some locals have now moved on to the new Berlin: Leipzig, the former East German city to Berlin’s south that some local creatives have fled to after having been pushed out of Berlin.

Figure 1. Liad Kantorowicz during a performance of her Watch Me Work in Cologne, Germany 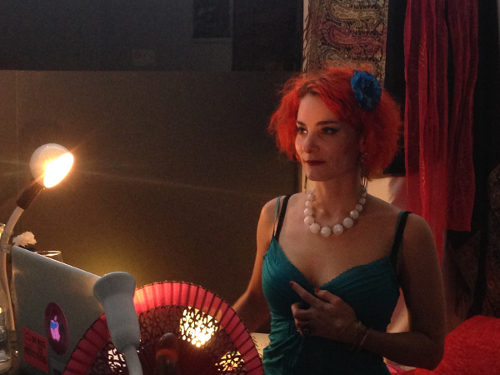 Meeting her for the first time at Edelweiss, a cafe housed in the blunt architecture of a former railway station, I was struck by how she was small, yet managed to take up space. Framing a pale face and held up with a silk flower, her hair was a shocking red, a welcome source of color on a gloomy spring day and an echo of the graffiti on the north face of the building. She was femme, girly, but also extravagantly armored in layers of jewelry—bangles clanked whenever she moved her arms, glitter sparkled on her cheeks, her folded legs raised her up, making her queenly. Her curious, wary eyes settled on mine, a luminous hazel, and as fierce as a bird of prey’s. The same mixture of vulnerability and bravado infuses her work.

Figure 2. Excerpt from Ain’t No Democracy Here by Liad Kantorowicz
Video used with permission of the artist.

A cis-gender woman who draws extensively on drag styles and idioms, especially camp’s knowing provocations, as well as on more female-centric burlesque traditions, she confounds the lines between art and activism. After a presentation, a prominent drag-king performer, gender theorist, and scholar challenged me to explain why Kantorowicz should be included in this project. Drag, this scholar insisted, is about impersonation, about drawing on conventions of gender, imitating or exaggerating them. What gender does Kantorowicz imitate? I responded that drag is tied to gender and gender performativity, but it is also not limited to them. But on this first point, Liad’s everyday style is eye-catching, even in a city like Berlin where denizens in leather and latex can be encountered at a local bakery: her bright hair and lipstick, and her underwear as outerwear would make 80s Madonna and drag queens of all eras proud. Moreover, Kantorowicz expresses her creative and political work through an array of characters that reflect her history and personality, even as they function as ciphers that amplify or distort the fantasies and anxieties of different publics. These characters are her, and they are self-conscious performances: they include the queer DJ Jihad; the feminist cam-sex worker; the Arab burlesque star; the political dominatrix.

Her art and activism employ drag as conceptual punk provocation. John Waters’ muse Divine comes to mind, as does New York’s foul-mouthed Lady Bunny. Liad is their progeny, and she’s performance artist Carolee Schneemann’s too. In one Berlin performance, “Piece of Me,” Kantorowicz lip-synched to Britney Spears’ song of the same name while stripping out of a hijab to reveal a map of Israel/Palestine dividing her body. A piece of meat rubbed over her nude form created an aural pun—piece of me/piece of meat—while her specifically female body made another point: the conflict’s impacts on Palestinian women, whose bodies, and those of their children, brothers, husbands, and fathers, are all too often reduced to meat. In “War is Good,” another hijab lip-synch striptease, this time held in a Tel Aviv neighborhood once associated with street prostitution, she pulled an Israeli flag from her vagina, a staple of her work from this period. These performances are cultural and ethnic masquerades that conjure the sexualized, threatening Muslim Other, as well as resistance fighters like Leila Khaled.

Kantorowicz’s drag is thus in keeping with Vaginal Davis’s “terrorist drag” (Muñoz 1999); she uses it—through the vehicle of her gendered body—like a weapon. José Muñoz used this idea to describe the work of Vaginal Davis, a black drag queen, artist, and performance-studies theorist who paired unlikely elements like whiteface and military fatigues in performances that were entertaining but also disturbing commentaries on race and sexuality. Kantorowicz likewise provokes viewers. She uses the power—real and imagined—of a potentially revolutionary female sexuality to excite and trouble audiences (see Preciado 2013). Some audiences, among them many Zionists or right-wing commentators in Israel, have attacked her as a filthy anarchist whore. Others claim her as a sex-positive feminist liberationist. Some are merely frightened: as a student in art school, she recently engaged in a performance that referenced forms of political resistance common in the West Bank, rock-throwing included. At least one academic forgot to duck.

Ain’t No Democracy Here was staged in Tel Aviv and Be’er Sheva during the fall 2013 election season. In this intervention, Kantorowicz confronted the oft-repeated mantra of Israeli exceptionalism: “Israel is the only democracy in the Middle East.” This mantra obscures and minimizes the extreme rightward shift in Israeli politics, which includes many antidemocratic trends, including laws penalizing calls for boycotts, restrictions on press freedoms, attacks on leftist NGOs, and the further politicization of the education system.

“I’m shocked they weren’t there sooner. You could never have gone so far in New York,” I said.

“It’s illegal in Israel, too,” she replied.

Apparently, their activities were deemed propaganda, and “you’re not allowed to engage in propaganda too close to the polls.”

While some of the members of her group ran off with the footage they’d been filming, Kantorowicz tried to deal with the police, who seemed “bored and annoyed that they would be called on to do anything.” The fickle, impromptu audience shifted gears, this time closing ranks against law enforcement, defending her and claiming, untruthfully, that the nudity had been simulated and that this was all just a student film. While this support was unexpected and welcome, it doesn’t affect her bleak outlook on politics in Israel. “Honey, we don’t have a democracy anymore,” she said. “What we have is political coercion sexed up as the freedom to choose.”

Kantorowicz’s project confronts us with this question: how committed are we to our political beliefs, or would we give them up for the strong leadership of a political mistress or master?

Liad does gender, sex, sex work, and politics up in drag. This is not drag as gender impersonation but as political aesthetic expression. Staging the ways sex and politics, or pleasure and coercion, come together is radical—an exaggeration, but not a distortion of the constrained political choices available in contemporary Israel. And making a scene of them is a weaponized feminist drag that attacks our assumptions about gender and sex, as well as neoliberal fantasies of democratic belonging. Kantorowicz illustrates the ways drag can operate as a site from which to engage broader political spheres.