Elora Lee Raymond - 13 January 2017
In response to a tense post-election moment in the US, the Metropolitics editorial committee has initiated Rapid-Response Peer Review, with a commitment to quickly reviewing and publishing articles that examine organizing and activism around crucial urban issues. Our second call was for papers related to housing policy. Here, Elora Raymond deploys unique research on the location of underwater mortgages to suggest that housing, not jobs, may hold the key to reigniting progressive politics in the Rust Belt. Joshua Akers profiles Detroit Eviction Defense, a coalition that has successfully combined a judicial strategy with direct protest. And John Krinsky argues for a sustained public commitment to housing at the state and local level in New York—a “progressive federalism”—in order to prevent the worsening of New York City’s current housing crisis.
housing / Rust Belt / crisis / housing crisis / Donald Trump / negative equity / underwater mortgage / Wisconsin / Pennsylvania / Michigan
Download PDF

One of the most interesting stories to come out of the current election is the rise in support of rural voters in Wisconsin, Michigan, and Pennsylvania for the Republican presidential candidate, Donald J. Trump. Many have argued that the Rust Belt revolt emerges from sectoral shift in labor markets (Edsall 2016). According to this view, change in partisan affiliation in the Rust Belt is the result of increasing globalization and trade, and concomitant declines in American manufacturing wages and jobs. Others suggest that declining unionization allowed former democratic voters to embrace a divisive candidate when, formerly, unions helped forestall racial divides in the Rust Belt and Midwest (McQuarrie 2016).

However, empirical research suggests that the relationship between manufacturing decline and support for the GOP is not so straightforward. Union households broke only slightly for the Democratic candidate, unlike past elections (Hesson and Levine 2016). Another researcher used Gallup Survey data of 125,000 Americans during the presidential election to determine the characteristics of Trump supporters (Rothwell and Diego-Rosell 2016). Rothwell and Diego-Rosell find that Trump supporters are less likely to be exposed to trade, less likely to live near immigrants, are higher-income than other Republicans, even when the comparison is restricted to White Republicans. Other survey research finds that Republican attitudes towards trade plummeted during the 2016 election. We can infer from this timing that Trump’s rhetoric, not economic realities, are driving those views, and that frustration with trade may well be symbolic rather than a transparent expression of economic distress due to globalizing labor markets (Pew Research Center 2016).

For these reasons, it has been difficult to make an economic case for the shift towards the GOP, and cultural explanations have risen to the fore. Certainly, there is evidence to back this up: Rothwell and Diego-Rosell found that Trump supporters are higher-income, but with lower social status, being far more likely to have a high-school education, and to live in communities with high rates of disability and mortality due to alcohol, drug abuse, and other lifestyle illnesses. Furthermore, they live in areas that are predominantly White.

One possible connection between economic decline, voter economic insecurity and rising support for the GOP, however, is the housing crisis. Overall, the housing crisis remains a widespread concern. Last summer’s MacArthur Foundation opinion survey found that 8 in 10 Americans felt that the housing crisis was still ongoing (MacArthur Foundation 2016). Rothwell and Diego-Rosell’s (2016) research indicates that Trump’s supporters live in areas with higher mortgage income-tax deductions, suggesting that they may be highly leveraged. He did not find that Trump supporters lived in places with large home price declines, but his sample was nationwide, so regional home-price dynamics in the Rust Belt may be obscured.

During the post-crisis era, rural areas and the shrinking cities in the Rust Belt suffered high rates of foreclosure and negative equity. Like Trump supporters, homeowners tend to be higher-income than renters. Yet due to the housing crisis, many homeowners see their household net worth declining. Overall, building equity through homeownership is less straightforward for middle-class homeowners than it was in the past. Since the mid-1990s, housing wealth inequality has risen swiftly, declining briefly during the housing crash, then widening sharply again during the recovery period, with many homeowners finding their nest egg dwindling, while a few in strong markets increasingly gaining home equity.

Could it be that Trump supporters’ economic distress is immediately related to the housing-market crisis and declines in household wealth, not shrinking incomes and shifting labor markets? In order to see whether there is a connection between support for the Republican candidate and the housing crisis, I look at three swing states in the Midwest and Rust Belt: Wisconsin, Michigan and Pennsylvania. I ask whether county-level negative equity correlates with an increase in support for Donald Trump in 2016 over Mitt Romney in 2012.

I assemble a county-level dataset of the change in GOP support between the 2012 and 2016 presidential elections. I look at whether factors like education, employment sector, racial demographics, and income can explain the association between negative equity and support for the Republican presidential candidate from 2012 to 2016. The data for this analysis are summarized in Table 1. 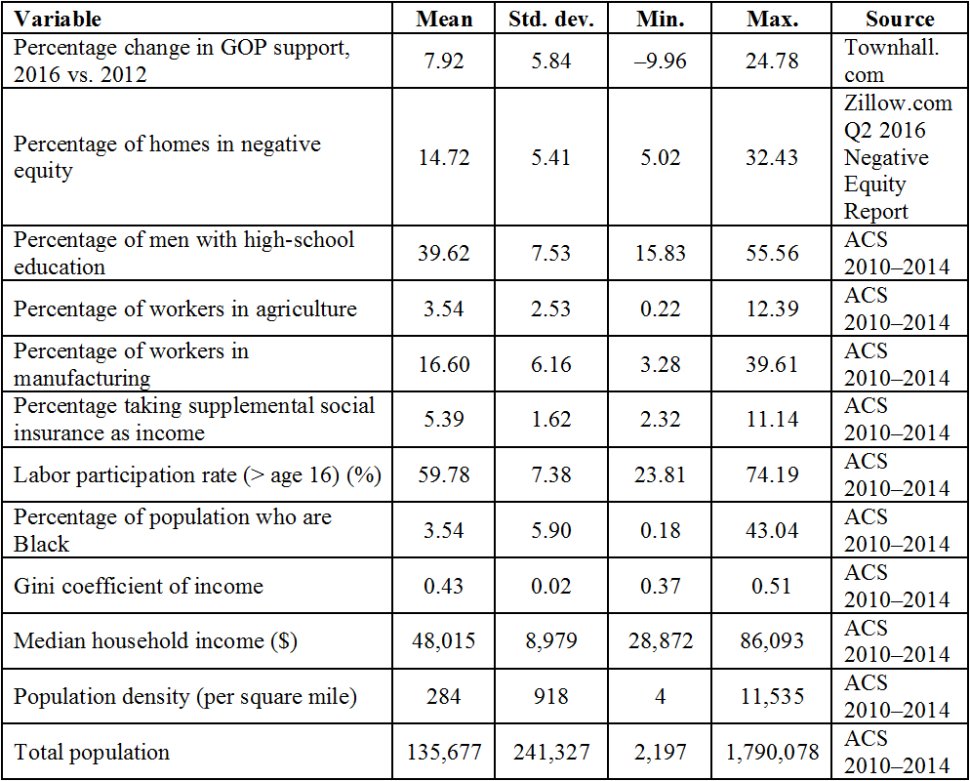 Table 2 plots the 10th, 25th, 50th, 75th and 90th percentiles for county-level change in support for the GOP presidential candidate from 2012 to 2016, and corresponding average percentage of homes in negative equity in each of these bins. Counties that became increasingly Republican have higher levels of negative equity. This is true nationwide, as we’d expect given the wide swaths of negative equity in red states, and high home prices in California, New York and Massachusetts. But it also remains true when I isolate three swing states: Wisconsin, Michigan and Pennsylvania. 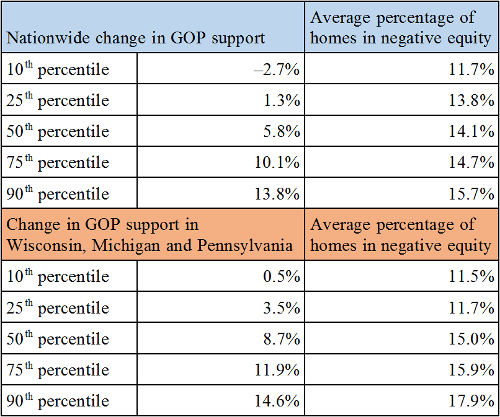 In the next analysis, I go beyond other analyses like that in Table 2, which show a simple correlation between negative equity and Trump support, and control for other factors like declining employment in manufacturing that could explain that association. I perform a regression analysis to see whether the negative equity is correlated with support for the GOP presidential candidate even after controlling for other economic and social factors. Like Rothwell and Diego-Rosell, I look at education levels and employment sector, as well as the percentage of households on disability who are taking supplemental social insurance (SSI) as income. I also measure employment, racial composition (percentage of the population who are Black), income, income inequality, population density and the size of the county (total population).

The results in Table 3 show how increases in each variable by one standard deviation affect support for the GOP presidential candidates from 2012 to 2016. The beta coefficient measure is useful because it shows the relative impact of variables, so we can see which variable is creating the largest change in GOP support from 2012 to 2016. In the first line, as the percentage of homes in negative equity increases by one standard deviation, or 5.41%, Trump outperforms Romney by 0.126 standard deviations, or 0.73%. This relationship is dwarfed by the effect of education, SSI income, and racial composition, but the effect is larger than our measures of labor sector, which are too close to zero to be significant. These results suggest that counties where most employees work in manufacturing or agriculture did not consistently see increases in support for the GOP; if anything, these counties were more likely to reduce support for GOP candidates from 2012 to 2016. The results call into doubt the idea that sectoral change is the primary cause of support for the GOP, though since voting is not strictly a zero-sum game, it’s possible sectoral change is related to declining support for Clinton relative to Obama.

Highlighted rows are statistically significant at the p > 0.05 level.

Even if Trump support comes from places with higher rates of negative equity, it’s hard to say exactly how material concerns translate into political beliefs and voting. Quantitative analyses of this election haven’t performed well: very few numerical analyses of voter polls predicted a GOP win, while historians and documentary filmmakers did, and provided compelling theoretical explanations for the 2016 electoral outcome. In any event, many quantitative analyses of swing voters in this election point right back to complex social factors like race, and education, and away from mechanical desires to maximize wealth or income.

Nonetheless, political analysis and strategizing continues to foreground labor policy and political identification driven by labor, even though the data on employment, labor sector and income don’t confirm these assumptions. If there is underlying economic distress, what if it is about the erosion of the American dream of homeownership, and declining places that need revitalizing? If so, what would a politics rooted in housing and place look like?

In the throes of the Great Depression, Herbert Hoover redefined conservatism in part by selling America on the dream of owning a single-family home. Today, homeownership is at a 50-year low while urban rents are swiftly rising, in part because housing policy under the Obama administration was too little, and too late, leaving many communities—rural and urban—behind. Yet under the incoming Republican administration, we expect even fewer government supports for construction or renting affordable housing, and fewer subsidies to lower- and middle-class homeownership. We expect trends to continue towards declining urban rental affordability, and in the owner-occupied sector, increasing housing-wealth inequality. Our shifting housing and mortgage markets have created new ways of distributing wealth, and new axes of struggle over that distribution (Kear 2013). Renters and homeowners have typically been one divide; homeowners too are increasingly tiered into groups who are able to accumulate wealth and can access credit, and those who cannot. Deregulation paired with exclusionary zoning cannot solve these problems for average Americans, nor can they effectively address trends of suburbanizing poverty and rising urban land prices. Yet the incoming administration’s Treasury Secretary nominee hopes to privatize the government-sponsored enterprises (Fannie Mae and Freddie Mac) with the goal of reducing competition with private-label mortgage securitizers. GOP congressional leaders have suggested chipping away at some of the protections around low-risk lending provided by the Consumer Finance Protection Board and Dodd–Frank, instituted after the housing crisis to prevent a repeat of the subprime and foreclosure crises of the Bush administration (Immergluck 2016). Incoming HUD chair Ben Carson’s policy preferences are unknown, apart from declarations that the 2015 Affirmatively Furthering Fair Housing rule must be rescinded (Mallach 2016). If the GOP base’s concerns about the economy are even partly related to their declining grip on homeownership and housing wealth, then these changes to housing and mortgage market policies may be more politically destabilizing than ever.

Metropolitics needs your help more than ever! Our journal, launched 10 years ago, will sadly be forced to close in the next few months if we do not manage to raise around €20,000 ($25,000). We are therefore calling upon your solidarity and generosity to help keep Metropolitics going, free and accessible to all. If you pay taxes in France, your donation is 66% tax-deductible.