Dawn of the Indebted: Zombie Neoliberalism Hits the Big Screen

Desiree Fields & Tom Gillespie - 8 March 2016
As the tremors of the 2008 crumbling US housing market were felt around the world, even the most astute couldn’t have predicted that its backstory would be adapted into not one but two Hollywood features. Desiree Fields and Tom Gillespie review The Big Short and 99 Homes—two films depicting landscapes where not even the winners of the game believe in it anymore.
Reviewed: The Big Short, a film directed by Adam McKay (2015, 130 minutes); and 99 Homes, a film directed by Ramin Bahrani (2015, 112 minutes)
financial crisis / housing / real estate / crisis / foreclosure / subprime / Wall Street / film / documentary
Download PDF

Around the world, the US subprime mortgage market is understood as the epicenter of the near-implosion of the global economy in 2008. Subprime loans served as the crucial nexus connecting homeowners on Main Street to investors and markets on Wall Street and beyond. Two recent films, one taking place largely on and around Wall Street just before the crisis, the other shortly afterwards in the neighborhoods of Orlando, Florida, reveal how not everyone lost when millions of mortgages (subprime and otherwise) failed. Instead, the crisis also opened up new, predatory economies on both Wall Street and Main Street. In the process, The Big Short, Adam McKay’s telling of Michael Lewis’s nonfiction book about investors who “shorted” (bet against) the mortgage market, and 99 Homes, Ramin Bahrani’s fictional thriller about an opportunistic real-estate broker flipping foreclosed homes, illuminate both the violence and the seeming ineluctability of advanced capitalism.

In an early scene of The Big Short, the narrator, bond salesman Jared Vennet (played by Ryan Gosling) confronts the audience with the uncomfortable truth that most of us don’t actually understand the financial crisis. Instead, he alleges, we trot out stock explanations to avoid looking like an idiot when the topic comes up in conversation. Setting about to correct our knowledge deficit, the film tells the story of the crisis in terms of the handful of traders and hedge-fund managers who observed the relaxed lending standards, increased mortgage fraud, and the start of elevated delinquency rates at the height of the American housing bubble, and bet against that market when everyone else was “going long”. 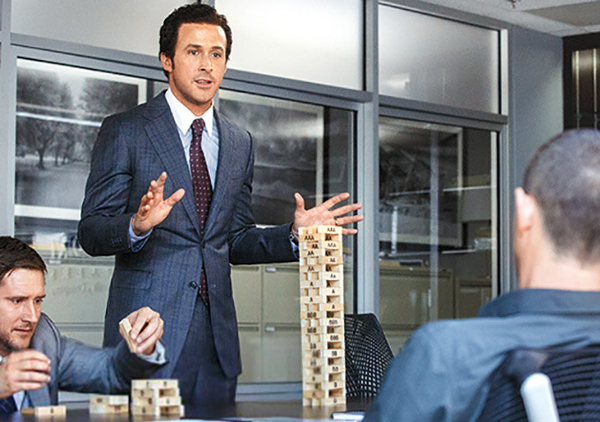 Despite the apparent abruptness of the 2008 crisis and the fact that no one seemed to have seen it coming, a particularly memorable scene from The Big Short makes it clear that this blindness was willful. Having taken out credit default swaps against several subprime mortgage-backed securities, hedge fund manager Mark Baum (played by Steve Carell) visits credit-rating agency Standard & Poor’s demanding to know why the securities were not being downgraded, despite rising rates of default on the underlying mortgages. The employee (played by Melissa Leo), who is wearing protective lenses after a visit to the optometrist, quite literally says: “I can’t see a damn thing”. Her response to Baum’s inquiry? “If we don’t give them the ratings, they’ll go to Moody’s, right down the block. If we don’t work with them, they will go to our competitors.”

As it dawns on Baum and his right-hand man Vinnie (Jeremy Strong) that the rating agencies are selling AAA ratings for fees, the prisoner’s dilemma of capitalism becomes all too clear: in seeking to further their own self interest, individual organizations (here, Standard & Poor’s and Moody’s) become dually complicit in a way that compounds the problem (blinding the rest of us by assigning top ratings to instruments filled with “dog-shit” loans, which then circulated through the global financial system). But, of course, the point of The Big Short is that there is no prison for the perpetrators here, so acting for the collective long-term interest doesn’t enter the calculations; the crisis itself and the recession that follow are externalities. Instead, there is only the immediate imperative to accumulate; the investors portrayed in The Big Short simply find a way to meet this imperative that others were too blind to see.

Before investing their money in shorting the housing market, Baum and his team visit Florida to confirm the existence of a housing bubble. Here they find Main Street’s cast of characters in the crisis. First are the tenants duped by landlords who aren’t paying the mortgage with their rent. Then slimy mortgage brokers peddling subprime adjustable-rate loans to immigrants and other vulnerable people. There are also exotic dancers who have mortgaged “five houses and a condo” and chirpy realtors who euphemize about an “itty-bitty market gully” and refer to the unemployed middle class whose mortgages are half a million dollars underwater as “motivated sellers”. Had The Big Short team returned to the streets lined with for-sale signs, abandoned McMansions, and half-built homes a few years later, they might have crossed paths with newly unemployed construction worker Denis Nash (Andrew Garfield) or predatory real-estate broker Rick Carver (Michael Shannon), the protagonists of 99 Homes.

99 Homes is a powerful account of how the losers of the subprime mortgage crisis—the foreclosed homeowners—see their lives spiral out of control as their homes are torn away from them. The film features several distressing eviction scenes that document the human consequences of the financial vagaries portrayed in The Big Short. It demonstrates how capitalism continues to rely on violent processes of dispossession in order to stabilize itself, leaving us in increasingly precarious positions, removing our choices and compelling us to play by the rules of its game. In a particularly cruel twist of fate, Nash finds himself working for Carver, who oversaw his eviction, in the hope that he will earn enough money to reclaim his family home. This defeat is rendered memorably in a scene where Nash has no option but to literally shovel shit from a foreclosed home in which the evicted residents had blocked up the sewers in a final act of defiance. 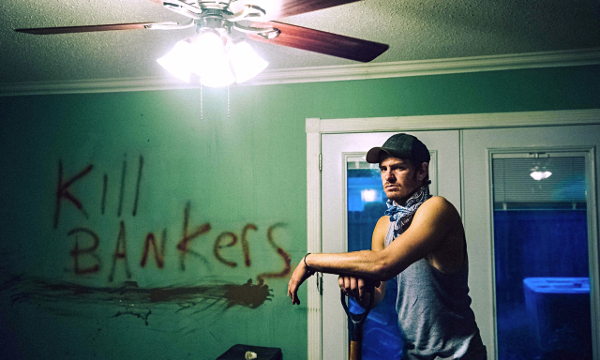 But the 2008 crisis didn’t only produce losers. In both films, we learn how certain individuals benefited from the chaos precipitated by the subprime mortgage meltdown. Where the traders and investors of The Big Short bet against the housing market in the buildup to the crash, in 99 Homes Rick Carver exploits its immediate aftermath through buying up devalued assets. Indeed, one of the most intriguing aspects of 99 Homes is the way it reveals the landscape of short-term gains to be found on Main Street after the crash: as Carver and Nash drive through a neighborhood, Carver explains that when he sees the overgrown lawns and homes without mailboxes that signal a vacant property and the new doorknobs that are a telltale sign of a recent eviction, he sees money. Nash quickly becomes all too skilled at exploiting this landscape himself, pulling air-conditioning units and pool pumps from foreclosed homes and getting a cut of the profit when Carver is reimbursed by the bank (or Fannie Mae) for installing them again.

It is a sign of the times, however, that in both films the winners are uneasy with their success. Despite being vindicated by his decision to bet against the market with millions of dollars in payout, Carell’s Baum is a haunted figure ridden with guilt due to his profiting from what he terms “an atomic bomb of fraud and stupidity”. “As fun as it is to watch pompous dumb Wall Streeters be wildly wrong,” he tells a conference audience, “I just know that, at the end of the day, average people are going to be the ones that are gonna have to pay for all this. Because they always, always do.” In one of the most memorable scenes of 99 Homes, Carver tells Nash his motivation for seeking to capitalize on the foreclosure crisis:

Do you think America in 2010 gives a flying rat’s ass about Carver or Nash? America doesn’t bail out the losers. America was built by bailing out winners, by rigging a nation of the winners, for the winners, by the winners. Do you go to church, Nash? Only one in a hundred is going to get on that ark, son. And every other poor soul is going to drown. I’m not gonna drown.

Rather than a self-styled heroic entrepreneur or “Master of the Universe”, Carver reveals himself as someone who has realized that the game is rigged and is desperately trying to survive by any means.

Compare these reluctant heroes to Gordon Gekko, the charismatic stockbroker with slicked-back hair of the 1987 film Wall Street: Gekko captivates an audience of shareholders by channeling Thatcher and Reagan with his now infamous “greed is good” speech. Whereas Wall Street was shot during the height of market triumphalism, 99 Homes and The Big Short encapsulate the cynical mood of the post‑2008 moment. We exist in a political-economic impasse where the lack of alternative narratives has enabled the undead ideology of neoliberalism to limp on like a zombie, despite being widely discredited by events like those portrayed in these films. As such, 99 Homes and The Big Short capture a historic moment in which not even the winners of the game believe in it any more.