John Mollenkopf - 9 May 2017
Especially in the central cities of the Northeast, neighborhoods that were once identified with black politics and culture are growing more ethnically diverse, and wealthier. John Mollenkopf examines demographic data from New York City’s Harlem and Bedford-Stuyvesant and reflects on their implications for electoral politics and the fates of economically vulnerable black households.
immigration / gentrification / Black politics / Black neighborhoods / New York / Brooklyn / Manhattan / Harlem / Bedford-Stuyvesant
Download PDF

New trends are influencing American cities. [1] Particularly notable is the falling-off of African-American populations in the central cities of large metro areas like New York, especially given that the nation’s black population is increasing faster than its overall population (Ratogi et al. 2011, Figure 8 & Table 5).

While Detroit and Chicago have each lost more black residents than New York City, New York is third on the list. New York remains home to the nation’s largest black population (the census recorded almost 2.2 million black residents in 2015 compared to fewer than 900,000 in Chicago) and more of metro New York’s black population lives in the central city than in any other of the 20 largest metro areas (Ratogi et al. 2011; Frey 2011). But this population has been falling. This trend has many consequences, visible in the population changes taking place in iconic black neighborhoods like Harlem, as well as in shifts in local political leadership, indicated recently by Adriano Espaillat’s election as the first Dominican American (and formerly undocumented person) to Congress to succeed Charles Rangel.

In Metropolitics, Rodriguez (2016) recently spotlighted the negative impact of “black urban dislocation” on black urban electoral power. How do we understand this dynamic? To my knowledge, no model of neighborhood change links together all the factors operating at different levels in a way that allows us to predict what is likely to happen in any given place. A close look at the trajectories of Central Harlem and New York City’s other black neighborhoods can give us some useful hints. Observers associate the sharp rise in housing prices and rents in Harlem with the growth of white and black middle-class professionals, displacement of poor and working-class black renters, and public efforts to remake the 125th Street commercial district. But it would be misleading to say that gentrification—real-estate entrepreneurs using public programs to upgrade land use and change racial and class tenure patterns—is the sole or even primary force driving change. Harlem’s black population has been aging and moving elsewhere for many decades, while new immigrant populations are also moving in alongside young white (and black) professionals. As Harlem has become less black, it has also become more diverse.

Harlem served as a primary home for the city’s black population between the 1920s and 1960s and is the heart of the city’s black cultural heritage. It has also been afflicted by disinvestment, depopulation, crime, and drugs. Harlem’s housing stock was developed at a fairly high-quality after the Civil War. Initially built for Manhattan’s growing middle class, it later attracted immigrant Jewish and Italian working families, and then became increasingly African-American in the early 20th century as blacks were displaced from lower Manhattan and property busts prevented Harlem landowners from attracting higher-income tenants. Central Harlem’s population shifted from 33% black in 1920 to 70% in 1930 (according to the censuses of each decade). The area elected Adam Clayton Powell to the City Council in 1941 and Benjamin Davis, a black Communist, succeeded him in 1944 when Powell moved up to Congress. It was home to an important Democratic club led by J. Raymond Jones, the “Harlem Fox,” that not only launched Charles Rangel’s successful challenge to Powell, but many other elected officials as well, including Mayor David Dinkins (Walter 1988).

After the Depression, however, the city’s black population grew more quickly in other neighborhoods than it did in Harlem. The opening of the A train in the 1930s and the magnet of wartime shipbuilding jobs in Brooklyn drew Harlem residents to Fort Greene and Bed-Stuy in Brooklyn (Botein 2013, p. 718). After peaking in 1950, Harlem’s black population steadily declined, affected by suburbanization, urban renewal, public-housing construction, and disinvestment in the private housing stock, reaching a low point in about 1980. The city’s black middle class chose to live in less-dense neighborhoods with higher-quality housing, including Central Brooklyn, Southeast Queens, and more northerly parts of the Bronx. Those remaining behind in Harlem were increasingly poor and many lived in public-housing projects, subsidized housing, and low-quality private rental housing. By the end of the 1970s, the city had taken title to almost 70% of the private rental units for nonpayment of real-estate taxes.

The revival of the city’s economy and population after 1980 did not initially have a large impact on Harlem. Mayor Koch’s 10‑year housing plan built more subsidized housing in the South Bronx and North Brooklyn than in Harlem. Ultimately, however, public and private investment returned most of Harlem’s in rem housing to service. Between the Great Society and 1980, developers built 3,615 units of subsidized housing in Central Harlem, half of them in Esplanade Gardens, a Mitchell-Lama co‑op complex of 26‑story buildings on the Harlem River finished in the late 1960s. After 1980, city housing programs financed 11,323 more units built by nonprofit and private developers. When combined with the 8,600 units of pre-existing public housing, this gave the neighborhood a substantial social-housing stock. A large share (44.7%) of Central Harlem’s households also live in rent-stabilized private housing, leaving only 14.7% in unregulated private housing. [2] Many other public investments were made in its commercial spaces, with an empowerment zone, the Schomburg Library, a revitalized Apollo Theater, and the Adam Clayton Powell Jr. State Office Building. [3]

By the 2000s, with crime rates having dropped to a fraction of the level typical 15 years earlier and the subways much improved, private residential investment in Harlem began to pick up, with the New York Times real-estate section frequently highlighting young African-American professional couples restoring brownstone row houses to their former glory. In 2006, private developers built the first new market-rate condo development, the 77‑apartment Lenox, on Lenox Avenue and 129th Street, with some units priced at more than $1 million. Other private developers followed and the pressure on the private rental market grew to such an extent as to threaten longtime tenants in the unprotected part of the market.

Harlem is one small, if important, part of a larger picture. Across the city, immigration, the aging and out-migration of the native-born minority populations, the labor-market shift to the services (and growing polarization of earnings and wealth), the paring-back of the welfare state, and technological change have been reshaping black neighborhoods. This broader context disadvantages heads of single-parent households with low levels of education and little or no attachment to the labor force, of which Harlem has a disproportionate share. Even in social housing, they find it hard to compete for housing not just with white professionals, but with Dominican and West African and Mexican immigrants, black middle-class professionals, and even German exchange students seeking an affordable new urban experience.

We can use the Public-Use Microdata Samples (PUMS) of the 1990 and 2000 US censuses and the 2007–2011 and 2011–2015 combined microdata files of the American Community Survey (ACS), as harmonized by the IPUMS project at the University of Minnesota, to unpack some key elements of the changing population of New York City and these neighborhoods. These data allow us to look across time, across groups, and across neighborhoods (in this case, Public-Use Microdata Areas, which are about the size of community boards). The population can be grouped into eight mutually exclusive categories depending on whether they live in households headed by (non-Hispanic) whites, blacks, Asians, or Latinos as well as whether the heads are native- or foreign-born. This approach gives a fuller picture of immigrant-origin households by associating native-born children with their foreign-born parents.

Table 1 shows that the city’s overall population grew 15.7% between 1990 and the 2011–2015 average (subsequently called 2015 for convenience), but the composition of that population changed dramatically. People living in native-born white households fell from a third to less than a quarter of the total and the white immigrant household share fell too. As a result, while whites may be succeeding or displacing non-white populations in some neighborhoods, their shrinking overall numbers mean that they cannot have the same impact on the whole city. On the contrary, white population decline has created as many neighborhood housing vacuums as it has crowd-outs.

Less well-known, but equally important, the shares of people living in native-born African-American and Puerto Rican households have also declined substantially. Over the last quarter of a century, people in African-American households dropped even faster than the native white population, while people in native-born Latino households declined more slowly. Like native-born white households, the city’s African-American and Puerto Rican populations are aging, their fertility is declining, and their members are more likely to leave the city than to move in. The leading city to which members of native-born black households move outside the metro area is Richmond, Virginia, while the largest extra-metropolitan city destination for Puerto Ricans is Allentown, Pennsylvania. By contrast, all the immigrant-origin minority household populations have grown substantially, including those headed by black immigrants.

Table 2. Changing population of Harlem and Bedford-Stuyvesant by race and nativity of household head 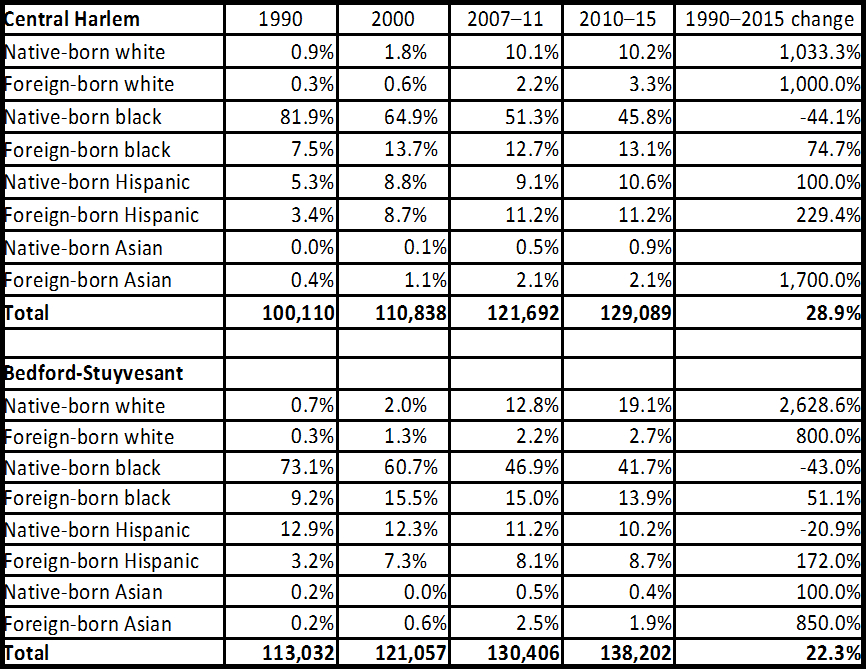 It is inaccurate, therefore, to say that white gentrifiers are the primary or sole driving force behind population trends in Harlem and Bed-Stuy. Certainly, whites have become substantial parts of neighborhoods in which African Americans remain the plurality. (Most students of urban racial transitions would not have thought this possible until recently.) But these neighborhoods are becoming more immigrant black, Latino, and Asian as well as more white. This suggests that the “global neighborhood” dynamic identified by Logan and Zhang (2010, 2016) has now extended to black neighborhoods.

In the mid-1970s, Harlem and Bed-Stuy were high-crime areas experiencing depopulation and disinvestment. At the same time, both were beginning to elect a considerable number of African Americans to legislative office. Forty years later, these neighborhoods are more attractive places to live, partly because their rents remain lower than in comparably attractive housing stock in other brownstone neighborhoods. Most of their elected officials are still African Americans with long tenures in office, but younger competitors who have immigrant backgrounds or represent growing Latino populations are beginning to challenge them. Just as a second-generation West Indian woman, Yvette Clark, succeeded longtime Central Brooklyn Congressman Major Owens in 2007, Dominican-American Espaillat succeeded Rangel in Harlem a decade later.

Given the persistent poverty among native-born minorities, increased overall inequality, and the upward mobility of many new immigrant groups, one might be tempted to say that this glass remains no more than half-full. Most native groups in New York City benefited modestly as the overall household income distribution shifted upward post-1990, but whites and Asians benefited disproportionately. In the context of a reduced crime rate, improved public security, and a well-functioning mass-transit system, better-off white and immigrant populations have moved into black neighborhoods with an attractive and relatively low-cost housing stock, even when they remain a (white or Asian) racial minority within them. Arguably, three decades of urban-policy interventions have raised the floor in Harlem and Bed-Stuy, but that has made the position of the native minority poor more precarious. The new generation of political leaders who are being elected by more diverse voting majorities than were the Civil Rights-era cohorts of African-American legislators must figure out how to address this challenge.

[1] An earlier version of this essay was completed for the Social Science Research Council’s Just Cities Initiative.

Homeless Theory and Research Collaboration: A Tribute to Nikita Price