America’s cities have an affordable housing problem. Real-estate investors—banks, corporations, private equity funds, institutional investors, and high-net-worth individuals—own a large and growing share of rental housing, and their appetite for yield is pushing the cost of modestly priced housing higher and out of reach for many tenants (Fields 2017; Teresa 2019). Mayors as well as state and federal politicians are in bipartisan agreement around a single solution to the crisis: tax credits. Tax credits encourage the market to build what the state will not; and one such credit, the historic tax credit (HTC), has become the primary mechanism to adapt old, underutilized, and often vacant buildings into affordable housing units in cities. Yet, despite the critical need for affordable housing, historic tax credits are falling short of their promise, squandering taxpayer resources on market-rate housing and remaking American cities into lucrative tax havens for investors.

Every time a historic tax credit is used, an investor gets a tax shelter. And by the end of 2018, over $145 billion of private investment had remade some 43,000 buildings in the United States with historic tax credits. For developers, tax credits have become a quick and easy source of equity in the postcrisis credit crunch. For investors, tax credits have become an important and legal tax shelter under the regulatory clampdown of the Dodd–Frank Wall Street Reform and Consumer Protection Act. These two interests align in cities’ historic cores and, in doing so, have zapped the tax burden of the country’s largest corporations and banks and enriched some of the nation’s wealthiest individuals, while at the same time shifting the tax burden onto the working and middle classes.

The urban geographies of tax shelters

Unlike the tropical havens that tax avoidance typically conjures (Roberts 1995; Aalbers 2018), the reality of tax reduction is more domestic and prosaic. As Figure 1 demonstrates, over the last decade, tax-credit investors poured money into secondary and tertiary US cities. This emergent “fiscal geography” reflects the distinctly urban outcomes of federal and state tax policy as it interfaces with financial markets (see Tapp and Kay 2019). Elsewhere, I have argued that the geographies of tax credits are guided less by the sheer number of historic buildings in these cities and more by state-level programs that mimic the financial benefits of the federal historic tax credit (Tapp 2019). The ability to combine or layer federal and state historic tax credits not only with each other but also with Low-Income Housing Tax Credits (LIHTCs), New Markets Tax Credits (NMTCs), tax abatements, and tax-increment financing (TIF) provides additional equity for a developer’s capital stack. Layering credits also means that the same building serves as a tax shelter multiple times over for a wide array of investors. 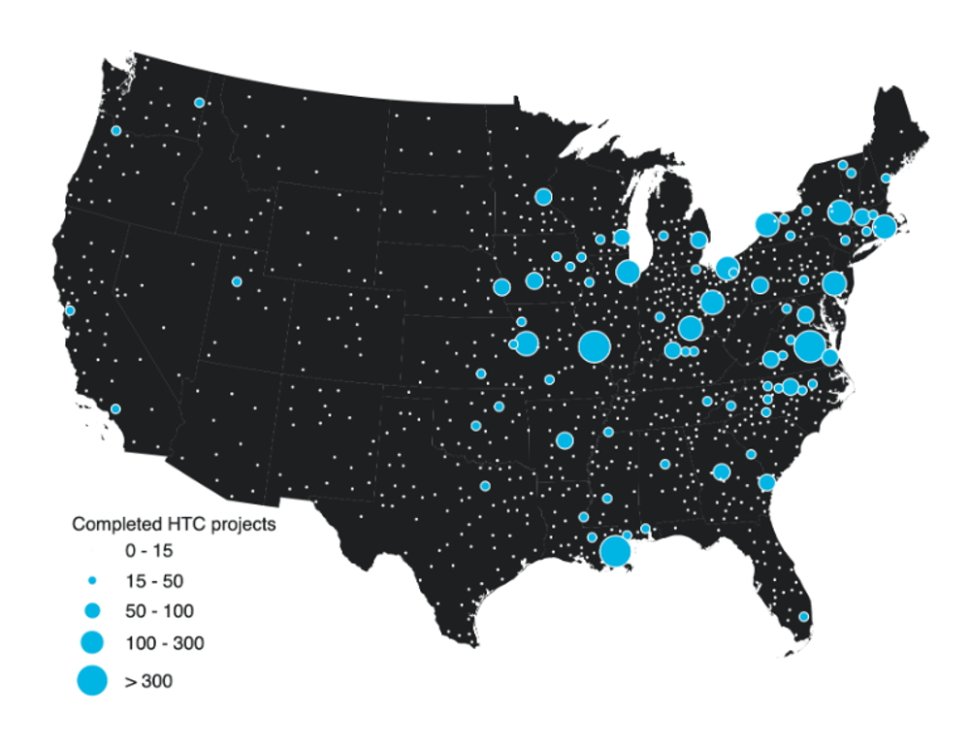 Data from the Technical Preservation Services of the National Park Service and geocoding services provided by Texas A&M Geoservices. Chart by author, 2020.

Market-rate rental housing now accounts for the bulk of housing units produced by historic tax credits. This comes at the expense of creating new and rehabilitating existing low- and moderate-income rental housing. Rates of the latter have steadily fallen since 2009 despite record levels of investment flowing into the historic tax-credit market (see Figure 2). If excessive investor appetite for tax shelters negatively impacts affordable housing, then the poorest neighborhoods in US cities suffer the most. In a study of the use of historic tax credits and housing-unit production in six US cities, researchers found that, on average, over 80% of the housing units created in very-low-, low-, and moderate-income census tracts were market-rate units (Ryberg-Webster and Kinahan 2017). Creating market-rate housing in low-income neighborhoods (i.e. gentrification) is but one of the regressive by‑products of sheltering corporate wealth with tax credits.

Figure 2. Investment (Part 3 applications) in federal historic tax-credit projects and percentage of affordable housing as a fraction of all housing created and renovated with HTCs, 2009–2018 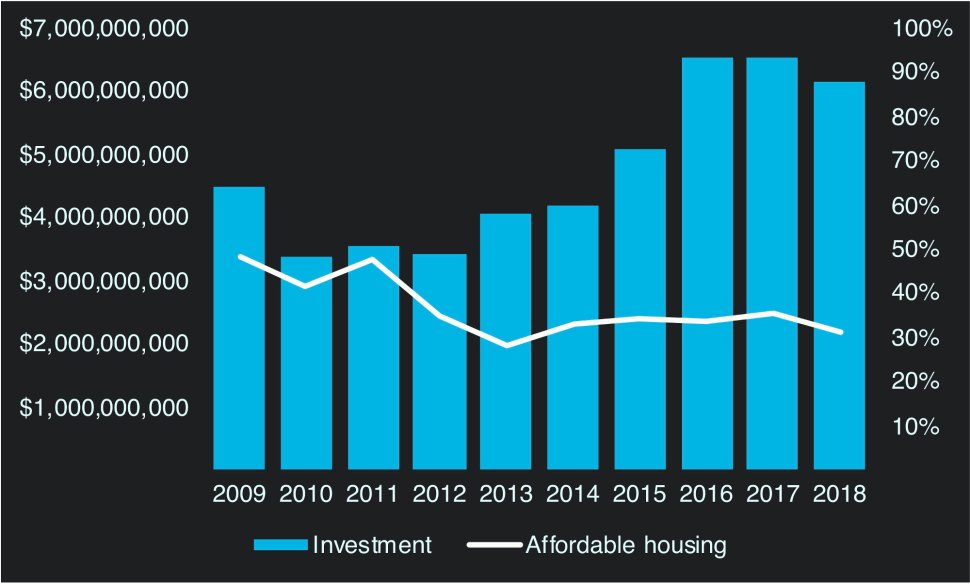 Data from the Technical Preservation Services of the National Park Service. Chart by author, 2020.

Profiteering from the state

Demand for tax credits drains the state’s coffers in big ways. For example, $1.00 of tax credits are routinely sold to investors for $0.70–$0.90. Realizing this, investors have turned to the “big buildings” in industry-speak. These projects net upwards of $5–8 million in federal tax credits—typically former mills, old apartments, commercial office spaces, and industrial facilities in the heart of cities—and are reportedly the first to be financed, squeezing out the redevelopment opportunities of smaller buildings on the periphery (see Figure 3). Not only do big buildings deliver outsized tax credits at a deep discount, but the ability to purchase credits below their nominal value allows investors to cheaply choose the tax rate they wish to pay. When large corporations like Sherwin Williams and American banking giants like Bank of America and PNC Bank decide they don’t want to pay the corporate tax rate, they simply buy more credits. Slinking down to a lower tax bracket shifts the fiscal burden of paying for public services onto ordinary people without the power to choose their tax rate, and leaves corporate investors awash in profits sourced from the state. 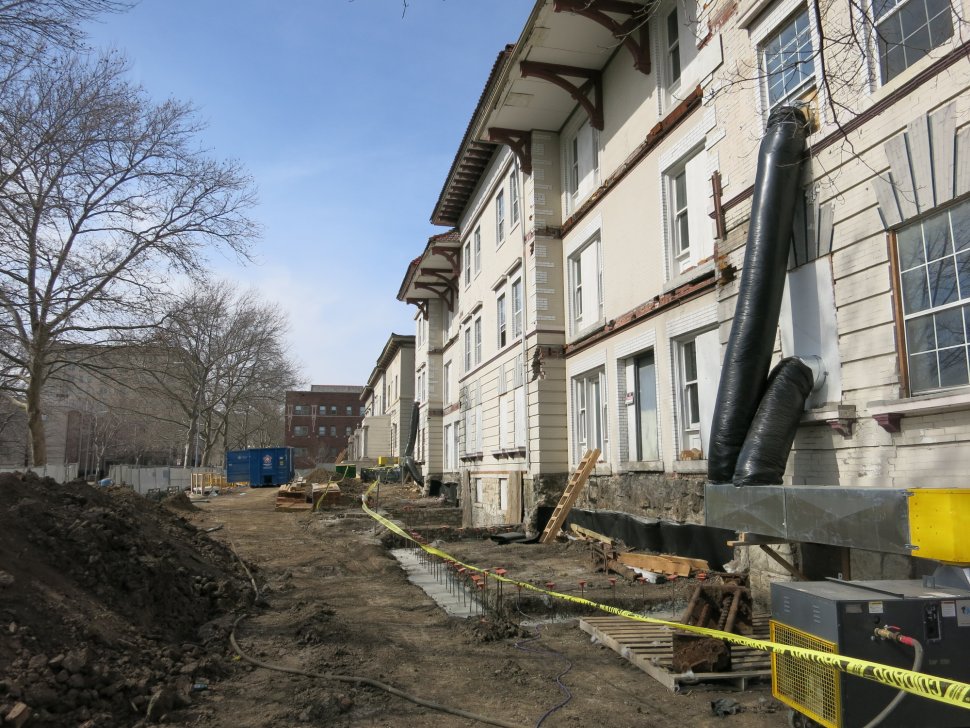 Manipulating tax rates downward has emerged as a key strategy in the generation of shareholder value. Take, for example, Evans Bancorp, a Buffalo-based bank, that slashed its corporate tax rate from 31.5% in 2012 to 18% in 2013 and 7.9% in 2014 by investing in historic tax credits (Tapp 2020). Publicly traded businesses like Evans Bancorp are required by law to pass these “savings” on to shareholders through dividends and stock buybacks. Like most banks and financial firms investing in historic tax credits, Evans Bancorp opted for the latter. Stock buybacks benefit the largest holders of a company’s stock who can quickly cash out and pocket the profit. Thanks to changes in how executives are paid, CEOs are routinely the biggest individual owners of bank stock. When the Federal Reserve rolled back Dodd–Frank regulations in June 2018, it approved a “flood of payouts” to shareholders. By 2019, CEO pay at banks investing in historic tax credits—Bank of America, Citibank, JPMorgan Chase, and PNC Bank—increased between 5% and 36%. New lower rates of individual income tax on the wealthy mean that CEO pay—which in the case of tax credits comes from the state—is permanently insulated from future taxation.

Shelters for people, not profit

Tax credits refashion cities into domestic tax havens. What appears to be purely an economic process has deeply political consequences for the cities we live in. First, instead of easing the affordable-housing crisis sweeping across US cities, tax credits add fuel to the fire by subsidizing the market for market-rate housing. These dynamics are largely invisible, especially in low-income neighborhoods where rehabbing vacant buildings is mistaken as an unproblematic social good, making it all the more important for scholars to bring to light. Second, tax credits empty the public purse, leaving the state unable to replenish what investors have depleted. Such budget shortfalls are the primary political scapegoat used to eliminate social spending. Third, tax sheltering gives titans in the financial sector more clout to strong‑arm public policies and steer the fate of the built environment, deciding what gets constructed and repurposed, and for what use. This process, a concept economists Emmanuel Saez and Gabriel Zucman dub an “inequality spiral” (2019, p. 22), further concentrates power (and profit) at the top by displacing the state’s fiscal responsibility onto those most in need of its redistributive capacity: ordinary people.

Reclaiming the tax system as political terrain is more important than ever as American cities increasingly become the material manifestations of this inequality spiral’s upward extraction of wealth. To start, we should remember that who pays taxes (and who doesn’t) is a collective political decision. Then we should question why older buildings cease to be profitable without incentives. It is also important to call attention to stock buyback schemes that line the pockets of people at the top. This can all happen by making different choices with our collective social contract: the tax code. Pretending there are no alternatives is not only not true, but it is the fundamental obstacle in building cities that shelter people, not profit.

Renee Tapp, “Shelters for Profit, Not People: The Rise of Tax-Credit Investment in US Cities”, Metropolitics, 22 September 2020. URL : https://metropolitics.org/Shelters-for-Profit-Not-People-The-Rise-of-Tax-Credit-Investment-in-US-Cities.html