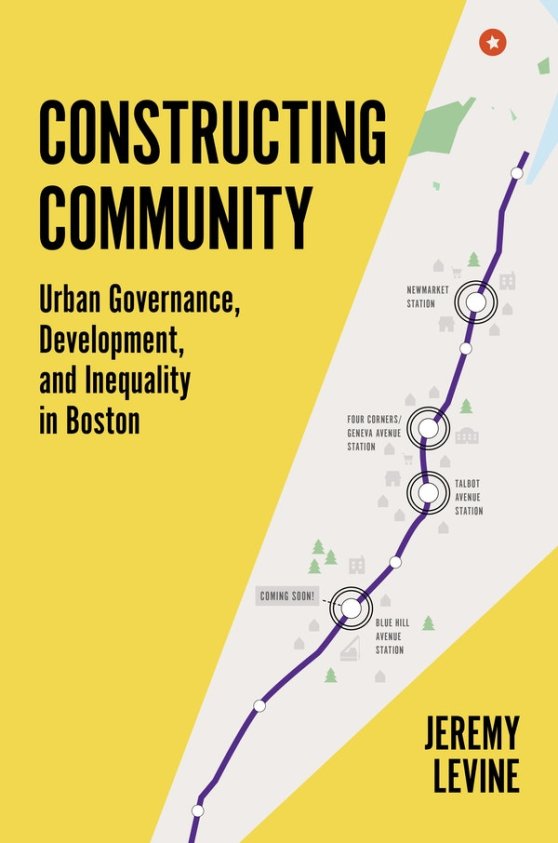 For a book about urban poverty and redevelopment, Constructing Community recounts few protests or headline-grabbing incidents. Instead, the drama unfolds slowly over the course of a decade in poorly lit community rooms, downtown board rooms, and the backseats of cars. This is a book about the banalities of bureaucracy and governance—a fact that author Jeremy Levine is unapologetic about and insists, quite convincingly, is central to his argument about the pervasiveness of private community-based nonprofit organizations and philanthropic funders in the public work of governing cities. Constructing Community provides a portrait of how power operates in urban development that will, I expect, be familiar to practitioners, generative for scholars, and worrisome to those looking to build a more equal city.

Community-based nonprofit organizations often promote themselves as spaces of resident engagement, if not of empowerment. Such claims reflect the longstanding—and continuing—marginalization of Black and brown people from municipal government and the history of demands for “community control” in the 1960s and 1970s that called for resources and authority to flow through the nonprofit sector. By the 21st century, nonprofit involvement in urban governance appeared to be a win for increasing diversity and representation. Levine certainly underscores the advantages of these public–private governance arrangements but raises uncomfortable questions too. Over six analytically robust chapters, he confirms that the days of the federal bulldozer and large-scale clearance that characterized urban renewal in the 1950s were indeed left in the last century, while also highlighting some “unintended consequences” of what replaced it (p. 25). There are, he notes, “dilemmas associated with the inclusion of private nonprofits in public policy,” namely “how attempts to empower the urban poor can inadvertently create more inequality, not less” (p. 27). That the central argument of Constructing Community reads initially as counterintuitive—how processes to promote inclusion, empowerment, and participation could actually increase inequality—is precisely why it is so needed.

Constructing Community follows the evolution of the “Fairmount Corridor” in Boston from an abstract idea to a physical reality during the first decades of the 2000s. The “Fairmount” name derived from the commuter rail line that ran through a handful of otherwise disparate areas in Boston’s predominantly low-income and predominantly Black areas of Roxbury, Dorchester, Mattapan, and Hyde Park. (If you’re having trouble visualizing this path, Levine includes a series of excellent maps in the book.) The notion of a united corridor along the transit line, however, was an artificial designation “constructed,” Levine notes, to draw needed investment for housing, transportation, green space, and economic development into the area. Over the course of the decade, the Fairmount Corridor in Boston variously gave its name to a geographic area, a project involving the opening of four new transit stations, a collaboration between four nonprofit community developer corporations (CDCs), a philanthropic funding initiative, and a planning coalition, all looking to redesign and redevelop this swath of Boston. Far from a bug in the development process, Levine characterizes the adaptability and ambiguity of the Fairmount Corridor as a feature, and one that advocates—particularly those at the four CDCs leading the redevelopment effort—strategically harnessed.

Early chapters situate readers in “the who, what, where, and when” of the corridor (p. 25). Chapter 1 reviews the history of urban renewal locally in Boston and nationally, connecting the politics of displacement and racial exclusion to contemporary policies that favored nonprofit involvement in redevelopment as a mechanism of community involvement. Chapter 2 revives Robert Dahl’s famous question of “who governs” and in answer points to those who claim to speak for “the community”—a term with little specificity and frequently invoked as a marker of authority and legitimacy by those involved in the corridor’s redevelopment. Chapter 3 then unpacks the notion of “community” from a spatial angle, analyzing the competing boundaries of the Fairmount Corridor proposed by nonprofit leaders, consultants, funders, and city bureaucrats to capture different demographic populations, tap into various funding opportunities, and direct limited resources. Locating the Fairmount Corridor in Boston, it turns out, became a surprisingly complex and contested task.

Later chapters dig deeper into the stakes of these processes. Chapter 4 takes on the notion of representation, confronting the reality that nonprofit executives function as unelected representatives of residents and neighborhoods in urban development. Chapter 5 “follows the money” (p. 26) and considers the influence of philanthropic funders, particularly at the local level, and the pressures facing both grantees and funders that rewarded high-capacity CDCs over those with tighter budgets. Chapter 6 finally brings forward the involvement of residents in urban development, a narrative choice that Levine reveals mimics urban development itself, with residents’ participation viewed “less a vehicle for influence and more like a bureaucratic box to check at the end of a long to-do list” (p. 26). Along the way, we see delays and photo ops, ribbon cuttings and bunkered meetings, and confront the inequalities that are perpetuated by a development process more diverse and more private than its antecedents, yet just as political.

Locating the people in process

We owe Levine a debt for so doggedly attending meetings as the core activity of this ethnographic research. (Indeed, the methodology appendix is a delight to read and a far cry from the dry academic prose that typically fills the genre.) In an era when it feels like most meetings, as the quip goes, “could have been an email,” Levine argues that the quotidian encounters between funders and grantees, between planners and residents, and among nonprofit executives is precisely where the action, so to speak, happens and where the work of governance takes place. Those meetings move to the center of “political decision-making” (p. 205) whereby nonprofit and governmental stakeholders hash out the details of public plans in private rooms cordoned off by invite lists and security desks.

Yet, for a book about process, Levine’s is populated, thankfully, by people: residents of the Fairmount neighborhoods, skeptical bureaucrats, federal visitors, well-meaning funders, elitely trained consultants, and, most prominently, seasoned nonprofit executives. One of the triumphs of this book is its resistance to typecasting heroes and villains and, by extension, its recognition of the competing pressures facing those involved in the corridor’s development. Levine depicts people earnestly trying to build a more equitable Boston and limited by forces beyond their control, but also with their own agendas, subjectivities, and personalities. The result is a fair though not always flattering portrait of people readers come to know well, including an executive director who claimed to represent one neighborhood while living in another, a resident who recognized the benefits of increased transit but opposed the development out of concern for her property value, and a funder whose words celebrated the leadership of area CDCs but whose actions ultimately caused one to close. Though Levine is careful to note the gender, age, and racial identities of his main characters (and of himself), he might have elevated these identities from descriptors of individuals to a more active site of analysis. I would argue, and suspect Levine would agree, that more than an “omnipresent backdrop” (p. 18), race is a central terrain on which the politics of development are played out, even, if not especially, in a governance process with significant racial diversity.

A real strength of Constructing Community is its positioning at the intersection of urban sociology, urban politics, nonprofit studies, and urban planning. Books that sit astride several disciplines risk falling into the cracks between them but Constructing Community resists that pull with prose that rejects academic jargon and invites readers into different literatures rather than expecting a fluency with them. The book seems destined to become a go-to source, paired well in political science and sociology classrooms with Dahl’s Who Governs or William Julius Wilson’s The Truly Disadvantaged, and in methods classes to illustrate ethnography. I plan, for example, to assign chapters of Levine’s work in my undergraduate course on nonprofit leadership and see it as similarly at home on syllabi for urban planning students needing an applied case study or theoretical primer on public–private governance.

As a study, in Levine’s words, of “urban policy in practice” (p. 27), the book offers as much for those working to reduce inequality in cities as it does for those studying it. I offer such an assessment as someone who has, at different stages of my career, occupied both of those roles. I currently hold a faculty position but worked before graduate school at the Boston Foundation on the Fairmount Corridor, scheduling and taking minutes at the kinds of meetings Levine later observed. His analysis of governance—as highly political and yet removed from the realm of formal politics, and as steered by a small handful of nonprofit leaders—rings true to my experience and gives voice to some of my lingering discomfort with it. For, as Levine rightfully reminds readers, there are winners and losers in urban development and denying the politics thereof serves no one.

Whether or not urbanists want governance to operate in such a hidden, private, and constructed manner in the 21st century, Constructing Community reveals that it does. This is how affordable housing gets built, public transportation reaches those who need it, and investment dollars come to places long denied them. Those are worthy outcomes. Still, Levine is right to remind us that while urban governance looks different from what it used to, old questions of democratic representation, power, and inequality remain. A more equitable city, like the Fairmount rail line itself, is a “slow train coming” and we’ve yet to reach our destination.