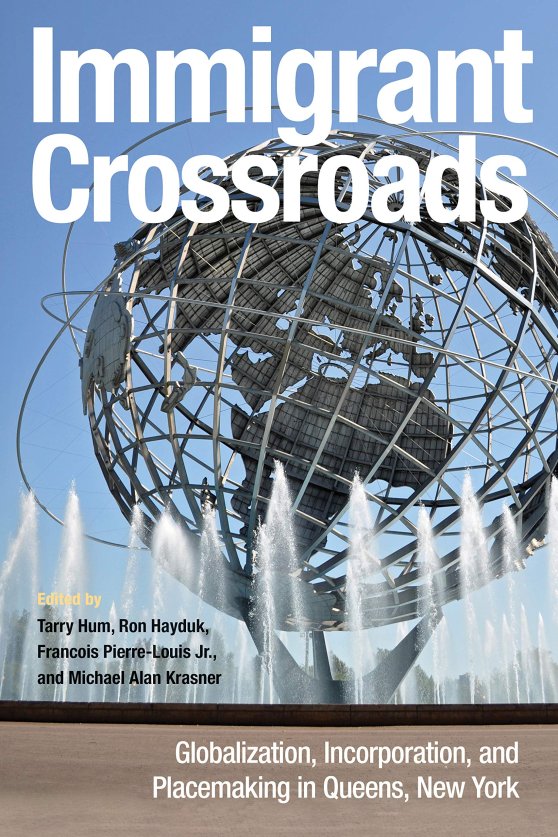 On January 28, 2017, an executive order from Donald Trump went into effect, banning refugees and travelers from seven Muslim-majority nations from entering the United States. Airports in immigrant gateways suddenly became contested terrain as networks of activists mobilized in resistance. A City University of New York (CUNY) Graduate Center classmate sent a rallying cry in an email blast: “Trump has detained two refugees at JFK! Protests all day at Terminal 4!”

John F. Kennedy International Airport is located in Queens, one of the five boroughs of New York City. As someone who lives and works in the borough, I felt a responsibility to show up. At Terminal 4, crowds of activists held placards and chanted as sympathetic drivers honked their horns. Civil-liberties attorneys set up a makeshift clinic in the terminal café to counsel the distressed relatives of detained travelers. Members of Congress milled about, taking turns negotiating the release of detainees with US Customs and Border Protection personnel and reassuring family members: “This is still a democracy.”

The racist, xenophobic policies of the Trump era form the backdrop of the new edited volume Immigrant Crossroads: Globalization, Incorporation, and Placemaking in Queens, New York. Ironically, as stated in the book’s introduction, Donald Trump spent his childhood in Queens, but the borough bears little resemblance to the majority-white social world that he knew (p. 6). Today, almost half of all Queens residents are foreign-born, and no single racial or ethnic group predominates (p. vii).

The editors make clear that nativism predates Trump and has long characterized US immigration policy. Nevertheless, they explain, the civil-rights-era Hart–Celler Act of 1965 opened the door to international migration, particularly from Asia, Latin America, Africa, and the Caribbean, which gave rise to the hyper-diversity now associated with Queens. More than five decades after the passage of Hart–Celler, progressive young adults are organizing successive waves of newcomers and advocating for greater immigrant civic and political incorporation. The conflict between these polarized ideological positions frames the inquiry in Immigrant Crossroads: “[W]hich version of America will prevail? Will our country return to xenophobia or will we embrace diversity? Will the well-to-do or working people prevail” (p. x)?

Editors Tarry Hum, Ron Hayduk, François Pierre-Louis, Jr., and Michael Alan Krasner have taught at CUNY’s Queens College, engaging on a regular basis with working- and middle-class students of many racial, ethnic, and faith backgrounds. Building upon earlier studies of the borough, [1] they bring together scholars from across the social sciences to explore how ongoing demographic change, postindustrial economic restructuring, persistent racialization, and other contextual factors shape paths to mobility, political representation, and grassroots mobilization of immigrants in today’s Queens. Immigrant Crossroads is an interdisciplinary project that expands the field of immigration studies in promising ways.

The book’s 14 chapters make a compelling case that, even in the face of structural inequalities and institutional constraints, Queens activists are providing examples of how to construct “a multiracial egalitarian democracy in the twenty-first century” (p. 13). As the subtitle indicates, the volume is divided into three sections. The first, “Globalization,” addresses the spatial impacts of international migration on local communities since the deindustrialization of the 1970s. Joseph Salvo and Arun Peter Lobo paint a dynamic picture of the borough’s demographic landscape, although they note that “[t]he immigrant population of Queens is not distributed equally” and “immigrant settlement affects overall patterns of integration and segregation” (p. 32). They refer to northwest Queens as a “global microcosm” because of the sheer range of nationality groups represented there (p. 35).

Between 1970 and 2014, the authors explain, white-dominant neighborhoods disappeared across the borough. They were replaced by 32 integrated, largely middle-class neighborhoods that are Asian–white, Hispanic–white, or Asian–Hispanic–white. Meanwhile, Blacks are excluded from residence in these areas. They live in just seven integrated neighborhoods and 17 minority (African American and Afro-Caribbean immigrant) neighborhoods, suggesting that a Black/non-Black color line persists in Queens (pp. 42–43; see also Flores and Lobo 2013). Yet, there are incipient signs of blending, insofar as South Asian and Latinx residents are settling on the margins of the minority neighborhoods. Salvo and Lobo emphasize that Queens has adapted well to change for decades, so it has the potential to achieve further residential integration.

On the economic front, globalization has produced less optimistic results. In his analysis of segmented labor markets, David Dyssegaard Kallick finds that the decline in manufacturing in New York City since 1980 has resulted in extreme income polarization in Queens. Lynn McCormick’s mixed-methods study of declining labor markets similarly shows that gentrification and high rents have eroded manufacturing jobs in Queens, and since 2000 the borough’s rising immigrant population fills low-level service-sector jobs that offer only precarious paths to upward mobility. Christopher Michael offers some hope with his qualitative study of worker cooperatives. He describes how Queens-based immigrant nonprofits have launched employee-owned businesses, giving undocumented domestic and day laborers protections and more control over their work conditions.

Two noteworthy chapters in this section analyze immigrant participation in electoral politics. Michael Alan Krasner and Ron Hayduk update the work of Jones-Correa (1998) by presenting case studies of the first Asian/American and Latinx candidates who broke through resistance from the Queens machine. They find that the Democratic county leadership protected predominantly white and also African American incumbents until, for self-preservation purposes, it was forced to accommodate new voting blocs’ interest in achieving more diverse representation. As for the candidates, a combination of personality, demonstrable community support, and an ability to navigate the machine made them appear viable; once they managed to climb the political ladder, they paved the way for co‑ethnics to follow. Meanwhile, Sayu Bhojwani makes the critically important point that not all groups can achieve the “gold standard” of electoral success (p. 207; see also Alba and Foner 2013). In her qualitative study of desis (an inclusive panethnic term used instead of the state-imposed racial category “South Asian”), she explains that internal group heterogeneity and small group size within integrated Queens neighborhoods mean that mobilizing around identity politics alone is a less useful strategy; coalitional politics, which involves mobilizing with other racial and ethnic groups, is necessary for winning single-issue campaigns. Bhojwani refers to the coalition-building approach as “the new machine,” and she highlights it as the way that desis assert their voice in the political process (p. 209).

The third section of the volume, “Placemaking,” examines how immigrants actively participate in constructing and contesting neighborhood identities. It begins with Sofya Aptekar’s rich ethnographic work on everyday interactions in the hyper-diverse neighborhood of Astoria, Queens. She describes how racially coded mental maps are changing as affluent whites move into waterfront developments close to low-income African Americans in public housing. Aptekar also analyzes different social patterns in local parks, community gardens, and libraries. She explains how these interactions reflect decades of dynamics between old and new immigrants, persistent segregation and inequality, and newer processes of gentrification at the same time that they have the potential to promote engagement.

Later in this section, François Pierre-Louis, Jr., presents qualitative research on the Haitian community in New York. He contends that while the neighborhoods of southeast Queens became racially segregated in the 1970s, they were also sites of community-building and integration into mainstream America for middle-class Black populations. Haitian immigrant leaders founded a nonprofit that leveraged relationships with progressive organizations to change policies stigmatizing Haitian refugees. Over time, the nonprofit sought to empower naturalized citizens and second-generation Haitian Americans to enter local political arenas. Nazreen S. Bacchus then introduces readers to the Muslim community in Queens. Demographic data attest to this group’s internal diversity along lines of ethnicity, educational attainment, and employment trajectories. Bacchus gives examples of growing Muslim integration, including interfaith programs at local mosques, college campus activities, and an active Muslim Democratic Club. She notes that Trump-era Islamophobia has prompted Muslim advocates to further increase their civic engagement. From these chapters, we see that Haitians and Muslims have inscribed their presence on the cultural and political landscape of the borough.

Two central chapters in this section present case studies of how multiracial grassroots coalitions successfully pushed back against pro-growth development championed by the administration of former mayor Michael Bloomberg. Donovan Finn explains how the Fairness Coalition of Queens raised awareness about plans to appropriate and privatize public land in and around Flushing Meadows Corona Park. Framing this as an equity issue, nonprofit leaders and community advocates mobilized newcomer residents and mentored them to assume leadership roles in the campaign. They succeeded in halting construction of a convention center and soccer stadium, and they won concessions from the tennis center in the park.

Samuel Stein and Tarry Hum describe a comparable situation to the west of the park, when elected officials announced plans to extend a business improvement district (BID) along more than 20 blocks of Roosevelt Avenue, a major commercial thoroughfare under the elevated 7 train. In this instance, an immigrant nonprofit eventually aligned with politicians, while grassroots advocacy groups such as Queens Neighborhoods United organized immigrant small businesses to oppose negative tropes about the commercial strip and resist potential displacement. Against considerable odds, the grassroots effort stopped the project. In both cases, “transformative populism” contested official visions of the political economy that would have threatened local diversity (p. 317).

While the studies in this volume affirm the hyper-diversity found in Queens, there is no clear theoretical consensus on how it can be sustained. An implicit conversation between the chapters underscores the complexity of immigrant political incorporation. For example, several studies identify the Latinx immigrant nonprofit Make the Road New York as a champion of immigrant rights but, in the case of the Roosevelt Avenue BID, it ended up on the losing side of the battle for neighborhood identity. As internal group differentiation grows in Asian/American and Latinx communities, nonprofits may find their strategic alliances increasingly split between the establishment and the grassroots. Future studies will need to do more to unpack the roles of immigrant nonprofits in local political arenas.

In addition, the Black political bloc in southeast Queens must be acknowledged as the new gatekeeper of the local machine. In 2019, Congress member Gregory Meeks was named chair of the county Democratic organization, succeeding his former colleague Joseph Crowley who had lost a stunning defeat to newcomer Alexandria Ocasio-Cortez. Surely, the dynamics between African American moderates in southeast Queens and Latinx, white, and Asian/American progressives in northwest Queens complicate the role of racial and ethnic identity in local electoral politics, but the change has yet to be studied and better understood.

Immigrant Crossroads raises critical questions in the immediate aftermath of the Trump era. It examines the fascinating context of Queens to make a tremendous contribution to the understanding of hyper-diversity in contemporary urban settings. This place-bound research demonstrates that the Queens example has much to teach us about the potential for, and challenges to, developing grassroots influence in the West and Global North.