In Cathedrals of Craft: Workplaces for the New Elite Service, Retail, and Manual Labor Jobs

A stroll through the market

“Hey, doctor, didn’t you study barbers before working here?” Giancarlo asks me after getting coffee.

Giancarlo is a butcher at Dickson’s Farmstand Meats in Chelsea Market, where I interned from 2012 to 2013 as part of my research on the reinvention of low-status service, retail and manual labor occupations as “cool” jobs in the new economy (see Neff et al. 2005). Located in the former Nabisco factory, Chelsea Market is a high-priced food mart featuring specialized shops and eateries, with offices for several prominent companies (Google, the Food Network, Oxygen Network, and MLB.com) located upstairs. The collection of so many food-related businesses in one enclosed place, the pedigree of some (e.g. Morimoto), and the market’s location near the High Line in the hip neighborhood of Chelsea have made it a popular destination for New Yorkers and tourists alike. Giancarlo noticed that a new barbershop, Decatur & Sons, providing high-quality men’s haircuts, had just opened by the espresso bar.

I first learned about Chelsea Market from my research on New York City’s community of cocktail bartenders and enthusiasts. Tad Carducci, a bartender and half of the consulting duo the Tippling Bros., opened The Tippler bar in its basement in 2011. On the backbar at The Tippler sit bottles of craft whiskey from Tuthilltown Spirits Distillery, a microdistillery just north of the city, where I interned in 2010. Here, then, was my entire project, in one form or another, under one roof: cocktail bartenders, small-batch distillers, men’s barbers, and whole-animal butchers. 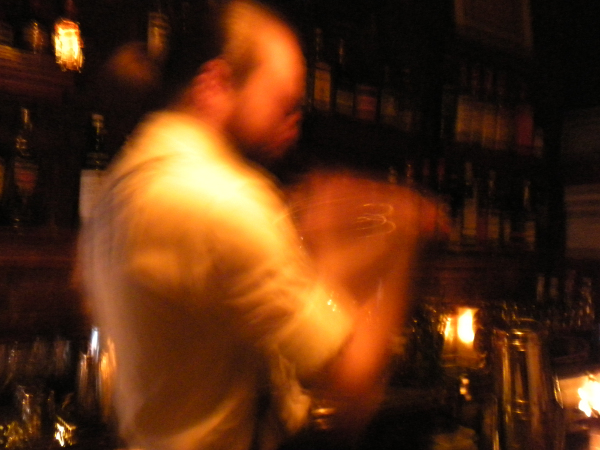 Bars, barbershops, and butcher shops were cornerstones of community in neighborhoods of the industrial city. Today, new versions of them catering to culturally savvy and wealthier customers have been opening in gentrifying neighborhoods in cities across the country. While not always tightly clustered in hubs like Chelsea Market, they tend to be located near one another. These places are more upscale than their predecessors and peers. Cocktails cost $14, squat 375 ml bottles of bourbon go for $42, haircuts start at $40, and meat can be quadruple the cost at a supermarket. Price, however, is not the sole basis for their exclusivity. These spaces of work and consumption lie at the intersection of three transformations occurring in the postindustrial city: shifts in the symbolic boundaries around highbrow and lowbrow tastes, new dynamics of community institutions, and the recoding of occupations, specifically among service, retail, and manual labor jobs. In concert, these social mechanisms produce new elite spaces of work and consumption based on reconfigured understandings of taste, community, and work.

Recently, society’s elites have been consuming low- and middlebrow culture in addition to their own upscale offerings (Peterson 1992, 1997; Peterson and Kern 1996; Peterson and Simkus 1992). Today’s young and future business leaders are as likely to be appreciative of hip-hop and beer as they are classical music and wine. No longer discriminating from their own social-class position, these people are “cultural omnivores” in search of variety. This change has launched a debate over whether culture has become democratized, or if it remains a signifier of social-class distinction (Johnston and Baumann 2010). An additional dimension to this shift identifies culture not merely as knowledge to be possessed or a product to be consumed, but as behavior to be performed (Khan 2010; Ocejo 2014a). With so much knowledge openly available on the Internet, people must demonstrate distinction among their peers by acting it out with ease. Such performances are sources of cultural power in an era of omnivorousness. 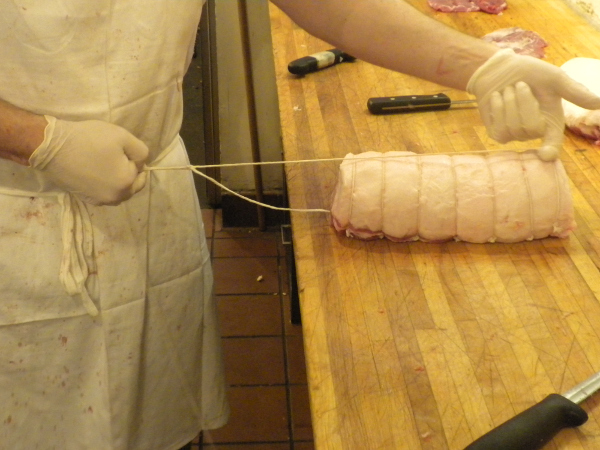 This shift in cultural taste permeates the social worlds of these upscale businesses. In one sense, the products they sell and the services are common, everyday items. People order cocktails and booze at bars all the time, everyone needs to get a haircut at some point, and meat is a dietary staple. And someone has to provide the services and make these items for customers. But each workplace and its workers elevate their products and services above the mundane and into a rarefied cultural realm through distinct practices and applied knowledge. For instance, whole-animal butchers employ a “meat philosophy” that promotes where they feel meat should come from and how it should taste and be produced (Ocejo 2014a). These practitioners imbue their products and services with these meanings while inculcating values of taste in their customers and clients. 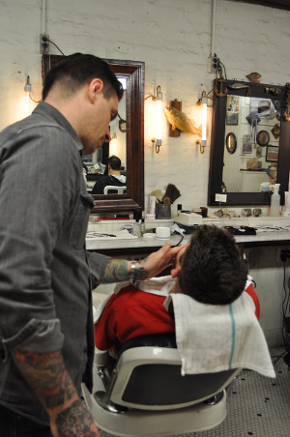 A barber preparing to shave a client © Richard E. Ocejo

Many of our images of the urban neighborhood in the industrial era portray insularity and degrees of self-containment, not to mention conflict between competing groups (Cayton and Drake 1945; Kornblum 1972; Lynd and Lynd 1929; Suttles 1968). Like Main Street in Small Town, USA, these neighborhoods had everything for residents’ daily needs. Its founders based Chelsea Market’s concept on this idea. Inside, you can go to your butcher, baker, greengrocer, and fishmonger, except you are walking in a repurposed factory, not a neighborhood, and your fellow shoppers are tourists and visitors from around the city, not neighbors. Residents of the industrial city’s neighborhood defined its culture and uses, and the more ethnically homogeneous the neighborhoods, the stronger the symbolic boundaries delineating them from other groups’ territories. The postwar period of deindustrialization, disinvestment, and suburbanization marked the decline of the romanticized white ethnic neighborhood and its community institutions. But the return of the well-educated middle class to the urban core in the postindustrial era has led to a resurgence of the “urban village” model for city neighborhoods (Zukin 2010). And this group’s desire to put down roots in “authentic” neighborhoods causes them to gentrify, which displaces existing working-class groups and denies future ones access (Zukin 2010). [1]

As in the industrial era, new businesses open in today’s gentrifying or gentrified neighborhoods to serve the local community, whose members often possess discerning, omnivorous tastes and senses of style. The most successful of these neighborhoods and businesses acquire reputations as destinations (Ocejo 2014b; Zukin 2010). Cocktail bars, upscale men’s barbershops, and whole-animal butcher shops draw on the romantic imagery of classic community institutions and strive to provide products and services for their neighbors. At the same time, however, they also promote themselves as destinations for curious or “in-the-know” consumers and for members of their industries’ rarefied taste communities (Ferguson 1998). Meanwhile, as examples of the city’s “old order” of luxury consumption and service struggle to survive (opera houses), renovate to adapt (high-end hotels), and disappear (French restaurants) in today’s economy and era of taste, these new establishments increasingly occupy their former positions among the cultural elite, and pressure them into changing (e.g. upgrade their cocktail program, incorporate local meat onto their menus).

Occupational recoding in the new economy

Knowledge- and innovation-based industries, such as finance, information technology, and health, drive today’s successful urban economies. Ideas and high-end, specialized services have replaced material goods as the postindustrial city’s economic engine. As a consequence of these shifts, as well as economic deregulation and increased global competition, workers in the “new economy” experience high levels of insecurity and precariousness in today’s labor market (Beck 1992, 2000; Neff 2012; Sennett 1998). And as with manufacturing in the industrial era, the knowledge-based industries support service industries like food and beverage, grooming, and retail (Moretti 2013); as the former grow in an urban region, so do the latter. Traditionally, bartenders, butchers and barbers were not highly educated and did not have many options in the labor market. But as these service industries have expanded and segmented, they provide new occupational as well as new consumption opportunities for elites and culturally savvy urbanites. The new meanings and values attached to this work attract people from different backgrounds.

The postindustrial city features an expanding “artisan economy” (see Heying 2010) of light manufacturing based on shared understandings of quality and authenticity. Common to specialized cocktail bars, microdistilleries, upscale men’s barbershops, and whole-animal butcher shops is the practice and promotion of a sense of craft and expansion of work roles outside the brick-and-mortar establishments. Unlike typical versions of these occupations, workers in these upscale workplaces devote themselves to acquiring both the skills of the trade and the cultural knowledge of the taste community to forge a unique career in their industry. With these skills and knowledge, these workers become valuable as consultants, freelancers, educators, and advocates for their profession and industry. These jobs go from being undesired and external to the new economy to being “cool” and among the professions making cultural innovations within the new economy. As a result, people—mostly men—with college backgrounds and these cultural understandings pursue these masculine-coded jobs as careers despite having other options in the labor market. For them, these jobs are vocations, providing meaning through materially oriented, craft-based service and light manufacturing work (as opposed to the immateriality of the equally male-dominated finance and IT industries). While these new businesses do not displace existing ones, they usually do not provide opportunity structures for the latter’s less-educated practitioners to achieve higher status. 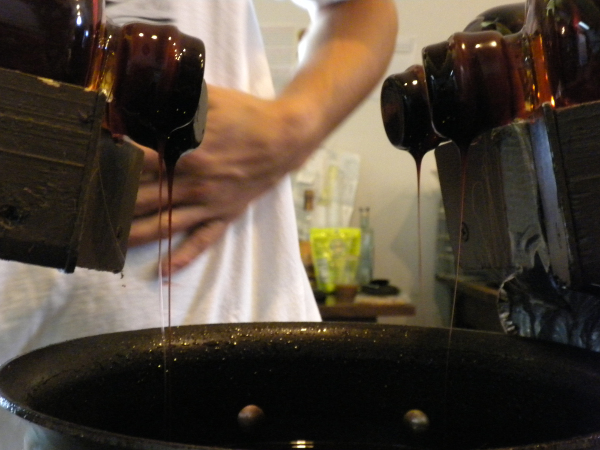 Sealing wax dripping from the bottles’ corks after getting dipped © Richard E. Ocejo

Return to the market

Chelsea Market serves as an excellent signifier of these transformations. In a repurposed factory building, several of its businesses reconfigure the meanings of high and low cultural capital by placing greater value on the local, material, and manual as opposed to the global, ideal, and mental (see Carfagna et al. 2014). Workers in the innovation sector (e.g. Google employees), members of the city’s “foodie” taste community, and tourists—all key groups in the new economy—support the market economically. And workers in its upscale businesses promote a brand of cultural knowledge and practice a sense of craft that elevate their status above that of common practitioners. The combined result is a set of workplaces and occupations in relatively unheralded industries that have become among the new elite places to consume and work.

[1] These new businesses reference this romantic urban village through their motifs. But new businesspeople differ from new residents in gentrifying neighborhoods because they do not take jobs away from existing working-class practitioners, and they have not caused existing businesses to close. But they generally do not provide explicit opportunities for members of the working class to enter their world.