Michelle Billies - 1 March 2016
The absence of charges brought in the case of a police murder of a Black lesbian in front of the homeless shelter where she lived reveals the impossibility of compliance with police authority for those already made criminal by race, disability, class, gender, and sexuality.
public space / gender / police / race / homelessness / brutality / Blackness / queer
Download PDF

Yvonne McNeil, a 57-year-old Black lesbian who used a cane for walking, was shot to death by police in front of the New York City homeless shelter where she was living in 2011. Short news reports of the incident offer conflicting accounts: some indicate that an argument with her girlfriend had ended, she was heading back into the shelter, she was holding either one or two knives, which police assert she refused to drop. One article reports she “lunged” at officers. None of the stories describe how she might have been a lethal threat to anyone in the moment or explain why police killed—rather than incapacitated—her. At the start of 2016, her family had not yet received a death certificate, nor an explanation of what happened from the NYPD.

Oppressions knotted together and torn apart

The complexity of the political and cultural forces that weave through McNeil’s embodied experience offers a map where the path to yet another police-murdered Black body in the US might be traced. The familiarity of McNeil’s story makes it all the more important to analyze, particularly because the matrix of oppressions involved in her murder are not consistently articulated. Gender, sexuality, and disability are too often left out of critical criminology analyses (INCITE!, 2009, Mogul et al. 2010; Moore et al. 2016; WWRC 2010), yet an intersectional analysis recognizes that oppressions strengthen each other like knotted ropes. I argue that McNeil’s death reflects social and political systems that draw certain bodies into certain locations at certain times so that they play out the role those systems demand. In this case, the disposability of her always already criminal body both marks her as a threat to public space that requires police violence and insulates the NYPD from accountability. This circularity generates a black hole of bodies, discourse, and violence in which realities dissipate and the felt truthiness of criminal guilt stands in to justify an unjust death.

McNeil’s body is also participating in circulations that result in a body claimed by and for the communities that had been supporting her survival, her mobility, and her identities. Rather than a totalizing victimization, McNeil’s interaction with police officers should be read as a site of struggle over her body and urban space. Identifying and imagining McNeil’s attempts to survive and retain her selfhood revives her agency and focuses attention on what is at stake for her. A lens of struggle examines her experience through an epistemology of survival, knowing the extensive array of strategies those on the brunt end of policing have historically used to protect themselves and assert their rights when interacting with police. Such an analysis also emphasizes the importance of scanning the interaction for signs of collective struggle. For if oppressions act in concert, so do forces of liberation, like so many hands tearing open a net.

The sidewalk where Yvonne McNeil was shot, in front of the New Providence women’s shelter in New York City 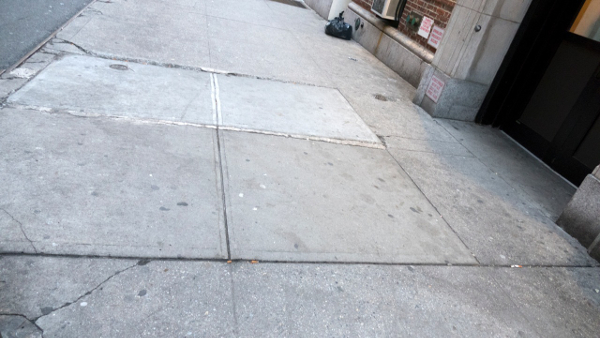 Thinking through McNeil’s response to police in this particular moment challenges discourses of total control and compliance that serve policing agendas. The imperative of control that drives officer relations with civilians (Billies 2013, p. 37) seeks psychological as well as physical dominance. When civilians attempt to protect themselves from police or articulate their rights, the drive to police discursively and affectively transforms civilian behavior into “resistance” to police authority and “cause” for police violence, conveying that the civilian’s obvious duty should be compliance with officer demands. This then converts the meaning of officer use of excessive force into a “necessary” response to noncompliance.

Disability justice studies and activism have highlighted the impossibility of disabled bodies being controllable or compliant (Sins Invalid 2014). McNeil, as someone who used a cane, may or may not have identified as disabled, but the detail of her cane in its seeming appeal for an added sense of injustice and compassion in news accounts invites a disability justice lens. When police respond violently to deafness as noncompliance, cerebral palsy as drunkenness, prosthetic legs as an unwarranted excuse not to get out of a car faster, or a mental-health crisis as a criminal act (Moore et al. 2016; Countercurrent News 2015), access to compliance is revealed as highly constrained. This interpretation of disability as noncompliance by police can be coupled with patterns such as the small number of seconds between an officer’s arrival on scene and the shooting of civilians to death (e.g. Tamir Rice) and police distortions that turn civilian claims to civil rights (“Why are you searching me?”) and human rights (“I can’t breathe”) into resistance to police authority. Doing so reveals “compliance” to be defined by police practice as “instantaneous, able-bodied submission.” Neoliberal civilians should respond to police with an immediacy that reflects an always already acceptance of total control by the state, an able‑bodiedness that can and should respond to state demands, and an utter submission that demonstrates the proper civilian relationship to state control. Exposed in this way, compliance establishes a standard of neoliberal civilian behavior that all should adhere to and noncompliance as the failure of overlapping “resistant” identity communities. These victim-blaming logics and sentiments then substitute as an explanation for McNeil’s death in a way that “feels” right to publics all but unaware of her in the first place, rendering accountability unnecessary.

Adding to the impossibility of compliance are historical criminalizations through which overlapping Black, gay, homeless, and disabled communities are cast as always already criminal. When officers encounter such bodies, the imperative for control means forcing them to submit, too often to the point of death. McNeil’s noncompliance with dropping her knives is reacted to by killing her, blaming her lack of adequate compliance for officer behavior. Her always already multidimensional criminality stands in for officer decisions and actions, attaching to the presence of knives to create an affective backdrop of causality. Her “lunging” at officers is further suspect because of how it is made to stand in for a description of what led to the shooting. Denying McNeil and others access to compliance and blaming them for their own deaths enacts the ultimate form of control over bodies and social categories, including what they represent (what the public imagines about them) and how they make publics feel (what emotions can be provoked by certain embodiments), reproducing criminal populations and the felt sense of criminal threat.

At the same time, the denial of McNeil’s ability to comply does not mean she did not take action on her own behalf or that no one else did. While there is still nothing publicly known about whether she or anyone else tried to intervene as the police approached her, the stories of others stopped by police suggest many possibilities, further amplifying interactions with police as sites of struggle. Research on testimonies of men and women of color as well as low-income LGBTGNC (gender-nonconforming) people stopped by police itemizes the plethora of ways such groups attempt to protect themselves from and engage with officers (WWRC 2010), summed up in strategies such as “contesting with rights and reason, protecting self and community, asserting social power, constructing critical knowledge, and pursuing justice/living life” (Billies 2013, p. 107). Invisibilizing practices nested in assumptions of criminality ignore what McNeil might have done to protect herself from or reason with officers, or how officers responded to her attempts. Imagining her being proactive and strategic challenges such assumptions. It emphasizes what she has in common with all those who face unjust policing, and reduces her isolation.

A final dimension of McNeil’s struggle highlights an understanding of space as continually constructed and contested through relations of power. McKittrick’s (2006) analysis of paradoxical space as constructions of freedom within geographies of US slavery makes possible McNeil’s presence in front of her shelter as a use—and therefore production—of space at least partially on her terms. That she was shot outside the homeless shelter where she lived is consequential for an understanding of how the sidewalk is made an extension of the shelter, where homeless Black disabled lesbians are allowed to be and be in relationships. Policing of homeless people and spaces, including outside of and inside homeless shelters, should be understood as part of a neoliberal agenda of urban development, pushing residents out of low-income areas and moving certain groups out of parks and off sidewalks in service to middle-class and business aesthetic expectations (Billies 2015; Mitchell 2003). McNeil’s presence in and outside the shelter brings her sexuality to these connected spaces in ways that contest an assumed heterosexuality of urban space. Her ability to express her lesbian identity and engage in intimate relationships constructs the space of the shelter and sidewalk as queer urban space and queer public space (Billies 2015; Hanhardt 2008; Reck 2009). This is crucial in thinking about alliance and solidarity. How do queer people of color, Black Lives Matter, disability justice, and anti-homelessness movements support each other in a context in which white, class-privileged, able-bodied gay communities are gaining public acceptance based on the exclusions of low-income queer disabled people of color from the realm of citizenship and queer life? Can homeless shelters be reimagined as queer public places where low-income LGBTQ people are able to live, be, and take collective action?

A comprehensive analysis recognizes the particular ways oppressions collaborate and solidarities emerge in this police murder. In addition to public statements released by the grassroots organization Queers for Economic Justice and others at the time, the Audre Lorde Project (2015), a center for LGBTSTGNC POC1 community organizing, recently participated in the annual nationwide march #RiseUpOctober to stop police terror in the name of Yvonne McNeil, posting a video by McNeil’s sister and an image of McNeil’s daughter as they seek justice and accountability. This move reawakens attention to McNeil’s death, demonstrating a form of struggle that continues over McNeil’s body, story, and life. In this way, the police–civilian interaction can be seen to produce multiple bodies: a body made to die in service to a police agenda of criminal disposability and another body claimed by family and community whose life deserves accountability and whose story joins others in service to ending police violence.