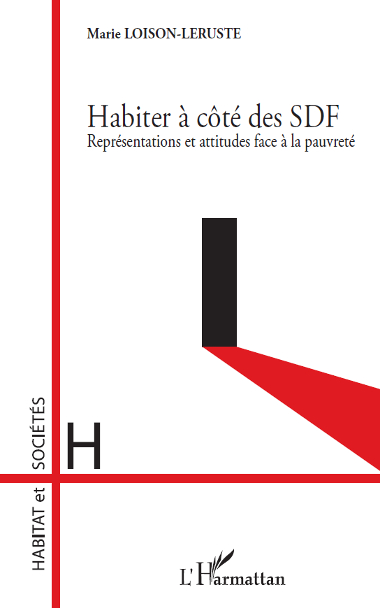 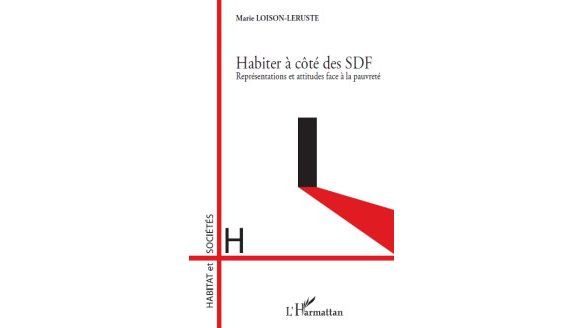 Good neighbours? Homeless people as seen by those who live alongside them

Marie Loison-Leruste’s work, adapted from her PhD thesis in sociology, questions the representations and attitudes of those who live alongside and interact with homeless people on a day-to-day basis. This empirical study follows in the wake of other works on poverty (Geremek 1987; Castel 1995) that have highlighted on the one hand the historic dualism in the way we deal with poverty, fluctuating between assistance and repression, and on the other the dichotomy in representations whereby the poor are divided into “good” and “bad” populations, with the former deemed worthy of assistance and the latter deserving only of disdain and/or repressive measures. The study is built upon a strong, sound hypothesis, namely that the existence of homeless shelters and emergency accommodation contributes to the visibility of homeless people in the city and influences perceptions of homelessness as a phenomenon. Accordingly, her investigations focus on the effects of this visibility. More particularly, the spatial proximity between city-dwellers and homeless people, via these facilities, constitutes the key element around which her questioning and research process pivots. The initial hypothesis of this work is that a noticeable presence of homeless people does not go unnoticed by local residents and, indeed, that their spatial proximity to facilities for these populations is correlated to the very fact of having an opinion about homeless people. The author is not concerned with understanding what individuals’ general representations about homeless people are; rather, her aim is to examine and analyse the notion of “cohabitation” [1] between the homeless people accommodated in these centres and the residents of the surrounding neighbourhoods. Her research is founded on a field study (in the form of observations and interviews) undertaken in two districts of Paris, together with a quantitative questionnaire-based survey (conducted by telephone) of 423 inhabitants of five neighbourhoods in Paris and one neighbourhood in the nearby suburb of Nanterre that are home to shelters and emergency accommodation.

A brief history of “homeless” as a category

Before taking a closer look at the discourses of these “neighbours” of homeless people, Marie Loison-Leruste considers how the use of “homeless” as a category came about and has changed over time (Chapter 1). In particular, she shows how the successive categories that have been used to define this phenomenon have led to different representations of poverty. The term currently used in France, SDF (an abbreviation of sans domicile fixe, literally “without fixed abode”) first appeared in the late 1980s and early 1990s (Pichon 2001; Damon 2002), replacing older vocabulary such as clochard (“tramp” in UK English; “hobo” in US English) and vagabond (“vagrant”). Whereas the term clochard – a stock character of mid-20th-century French folklore – typically designated a marginal individual who had chosen his or her condition, the connotations of SDF instead refer to social exclusion and poverty. Although this latter term has supplanted all others, the author highlights the difficulties inherent in categorising a particular population and warns against excessive homogenisation in this regard. To illustrate this point, she analyses a number of nomenclatures – everyday, legal, administrative, academic, statistical, third-sector – that reflect the complexity and variety of stakeholders implicated in the construction of a social category.

Discourses on local homeless people: variations on the theme of rejection

Following this critical genealogy of homeless people as a category, the author gets to the heart of the matter by asking the following question: “How well do they [homeless people] and their neighbours cohabit the space in and around these streets?” (p. 87). In answering this question, the author focuses solely on residents’ discourses, as recorded in the interviews and questionnaires. Her analysis therefore does not take account of the interactional situations upon which respondents’ relations to others may be based.

Three aspects appear to dominate residents’ discourses on their co‑presence with homeless people:

After analysing these perceptions of the homeless, the author turns, in Chapter 3, to the different attitudes adopted by residents in connection with these perceptions. While rejection seems to be the most commonly held attitude, Loison-Leruste offers a more detailed typology. She differentiates between four forms of rejection using a nomenclature based on two different variables: the intensity of respondents’ feelings of insecurity, and the nature of their (re)actions with regard to shelters and homeless people.

The first of these attitudes, “engaged rejection”, refers to certain residents’ highly critical stances towards the presence of homeless people. They express significant feelings of insecurity and occasionally take part in collective action against homeless people and the facilities that accommodate them. Their repertoire of contention is relatively varied, and includes signing petitions, writing letters of complaint to politicians, organising public meetings and creating residents’ associations.

Other inhabitants – the majority, according to the author – express their rejection of homeless people and associated facilities in a more indirect way (“distanced rejection”). These residents cite disturbances but do not take any action. Their discourse “is a mixture of tolerance and discomfort with regard to homeless people” (p. 165).

The third attitude identified, “critical of rejection”, corresponds to residents whose discourse explicitly disapproves of those neighbours with attitudes of “engaged rejection”.

Lastly, “indifference”, the final stance described, is characterised by a certain detachment with respect to the presence of homeless people and to what happens in the neighbourhood in general. This attitude was the least common of the four.

A multitude of factors that influence perceptions and attitudes

In the fourth and final chapter of the book, the author identifies the numerous criteria that govern variations in residents’ attitudes vis-à-vis homeless people, and indeed highlights the relative instability of these attitudes in connection with certain variables. She begins by underlining three factors likely to influence residents’ perceptions: seasonal variations in facilities’ capacity, the nature of these facilities, and the spatial configuration of the areas in question. For example, 65% of people interviewed in a neighbourhood of the 9th arrondissement of Paris [2] declared that they experienced feelings of insecurity, compared to just 38% in a different neighbourhood in the 14th arrondissement. [3] The author attributes this variation in perceptions to the nature of the facilities concerned: in the first case, the neighbourhood is home to an emergency accommodation centre where homeless people are particularly visible owing to their frequent comings and goings; in the second, the centre in question offers healthcare beds where individuals can stay for longer periods, resulting in a lesser presence on the street. At this juncture, we might also wonder whether the gender of the homeless people encountered also has an effect on residents’ perceptions; unfortunately, the author does not provide any additional information of this kind about the populations that frequent the facilities selected for her study.

The quantitative data collected do, however, underscore the influence of socio-demographic characteristics on residents’ attitudes. Very broadly speaking, homeowners tended to more hostile to the presence of homeless people than tenants, not least because the former tend to have lived in their neighbourhood for longer. Occupancy status therefore illustrates a sentiment of belonging to a place, which certain residents feel must be defended against “the threat of homeless people” (p. 190). The level of rejection expressed also varies according to respondents’ family situations, as feelings of insecurity – that is, fear of homeless people – are reinforced by the presence of children.

Although these analyses tend to portray residents’ stances as being immutable, Marie Loison-Leruste strives to show that attitudes can also change over time: certain residents who had previously taken action against the presence of homeless people have gradually resigned themselves to the situation and no longer participate in such activities. In addition, and somewhat surprisingly, the quantitative survey shows that those residents whose attitudes are close to the “engaged rejection” category are the most likely to make donations to charities. The author analyses this apparent paradox in terms of Nimbyism: [4] these inhabitants are not against the implementation of projects that are in the public interest (here, the presence of a centre for homeless people) – except when it happens in their neighbourhood. From this standpoint, belonging to the “engaged rejection” category does not necessarily equate to a rejection of measures to help poor people in general. More specifically, these inconsistencies in people’s attitudes suggest that forms of selective compassion exist even among those residents who are against the presence of homeless people in their area. This compassion would seem to depend on the context, on seasonal factors and on respondents’ social status.

As we have seen, Marie Loison-Leruste has combined qualitative and quantitative methods in order to study how homeless people are viewed by their “neighbours” – and has left us in little doubt that rejection (and variants thereof) is the dominant reaction among city-dwellers with regard to the presence of homeless people and/or accommodation facilities for homeless people in their neighbourhood. This rejection is more or less constant and consistent, raising questions about the possibility of social diversity and the place of the poorest in society. And yet how do these same residents act and react when faced with a noticeable presence of homeless people on the street? Ultimately, what form does this “cohabitation” take in terms of real-life situations? Here, we might express some regret that the author did not mobilise observations of these situations of co‑presence, which – as other authors (Gayet-Viaud 2010; Girola 2004) have noted – can reveal attentiveness (or a lack thereof) towards others and gestures of civility, as well as forms of sociability that can also develop between homeless people and local residents.

Marine Maurin & translated by Oliver Waine, “Good neighbours? Homeless people as seen by those who live alongside them”, Metropolitics, 5 June 2015. URL : https://metropolitics.org/Good-neighbours-Homeless-people-as.html

[1] This notion of cohabitation suggests that the homeless people accommodated in these centres live there for a certain time. Accordingly, the author seeks to consider them as residents as well, hence the use of terms such as voisinage (“neighbourliness”), although greater reference is made to the notion of co‑presence, which highlights the tensions between spatial proximity and social distance (Chamboredon and Lemaire 1970) in residents’ attitudes.

[2] The city of Paris is divided into 20 administrative districts called arrondissements. The 9th arrondissement is in north central Paris, between the Opéra Garnier and Montmartre. It includes neighbourhoods such as Nouvelle‑Athènes, southern Pigalle, Faubourg Montmartre, and the shopping district around Boulevard Haussmann.

[3] The 14th arrondissement is located in southern Paris and includes neighbourhoods such as Montsouris, Alésia, Plaisance, Pernety, southern Montparnasse, and Denfert‑Rochereau.