Diverting Eyes and Bodies: The Management of Homeless Visibility in New York City

Eric Goldfischer - 19 November 2019
Eric Goldfischer argues that homeless diversion programs in New York City simultaneously divert the bodies of homeless people away from public spaces and the eyes of housed people away from these populations, so that city residents will not see and attempt to comprehend the crisis of homelessness.
homelessness / visibility / invisibility / marginalized populations / public space / New York

In recent months, renewed attention has focused on the visibility of homeless New Yorkers in the subway system. Metropolitan Transit Authority (MTA) president Andy Byford and others have publicly blamed homeless people for ever-worsening delays. The de Blasio administration created a Diversion Pilot task force, which was bolstered by the hiring of 500 new transit police officers. This group, comprising police officers paired with outreach workers, now patrols the rail system offering a coercive choice: a trip into the shelter system, which many street-homeless New Yorkers deliberately avoid, or on-the-spot enforcement of the MTA’s code of conduct, which would result in a hefty fine and possible arrest. This “diversion pilot” uses the language of avoiding the criminal justice system as justification for its latent intention: to divert homeless people away from the rest of the population, while also diverting the eyes of the city away from homelessness and distracting city residents from confronting homelessness’s root causes.

While it may aim to push homeless New Yorkers into the shelter system as opposed to incarceration (as homeless activists at Picture the Homeless have written, the two are not so dissimilar), the removal of visibly homeless people from the subway system also attempts to divert the eyes of what the MTA calls its “paying customers” from the ongoing sight of unhoused people within the city’s infrastructure. In doing so, the diversion program takes its place in a long line of New York City efforts to manage the visibility of homelessness, which conflate the disappearance of homeless people with solving a housing crisis. By looking at the trajectory of these efforts, I show why the idea of diversion, both of eyes of city residents and of bodies of those who “look homeless,” remains so powerful in urban homelessness policy. I also highlight the centrality of “green” development projects in this story, and discuss their relevance to the current subway diversion pilot.

New York City’s desire to remove people who appear to live without a traditional roof over their heads from public space has remained constant, evidenced by the city’s constant moving-along of homeless and other marginalized populations away from areas whose land values are increasing. To do so, the city employs one of its oft-used mechanisms: urban development projects, which are inextricable from government efforts to disrupt communities of color and visually minimize homelessness and poverty (Kerr 2011; Smith 1996). Homeless New Yorkers (and in urban areas across North America) have felt the impact of development through legislation that limits their movement (Beckett and Herbert 2009); criminalization through broken-windows policing, which targets many so-called “quality of life crimes” that go hand in hand with surviving on the streets (Vitale 2008; Camp and Heatherton 2016); and laws and campaigns that directly target the appearance of “looking homeless” (Schweik 2009; Goldfischer 2018). But the act of diverting homelessness away from a given area, as the MTA currently proposes to do, remains intimately connected to processes of urban development.

During the height of the Great Depression in New York City, the development of public parks diverted homeless people away from areas that would be taken over for recreational purposes, which the city understood as a more valuable use of space than the day-to-day survival of those living without traditional homes. Under Mayor Fiorello LaGuardia and Parks Department chief Robert Moses, the city took advantage of federal funding from the Works Progress Administration (WPA) photography project to visually catalogue areas where homeless people lived in squatters’ camps, as a prelude to park development. Photographs taken in the 1930s by WPA photographers were crucial to crafting the government’s narrative and “elicit[ing] sympathy” for the victims of the Depression (Dauber 2013, p. 91). But the lack of focus on the individual squatters in the photographs shows that homeless New Yorkers were not considered victims of an economic crisis, but rather objects to be displaced so that the land they occupied could be converted to serve a greater purpose. The expansion of Riverside Park, in northwestern Manhattan, offers one example. Photographers documented a site over the course of a year where photos of squatters’ shacks are replaced by images of a work crew digging a path along the river’s edge. As he did in many other instances, Moses effectively utilized green development to displace a squatter community. [1] 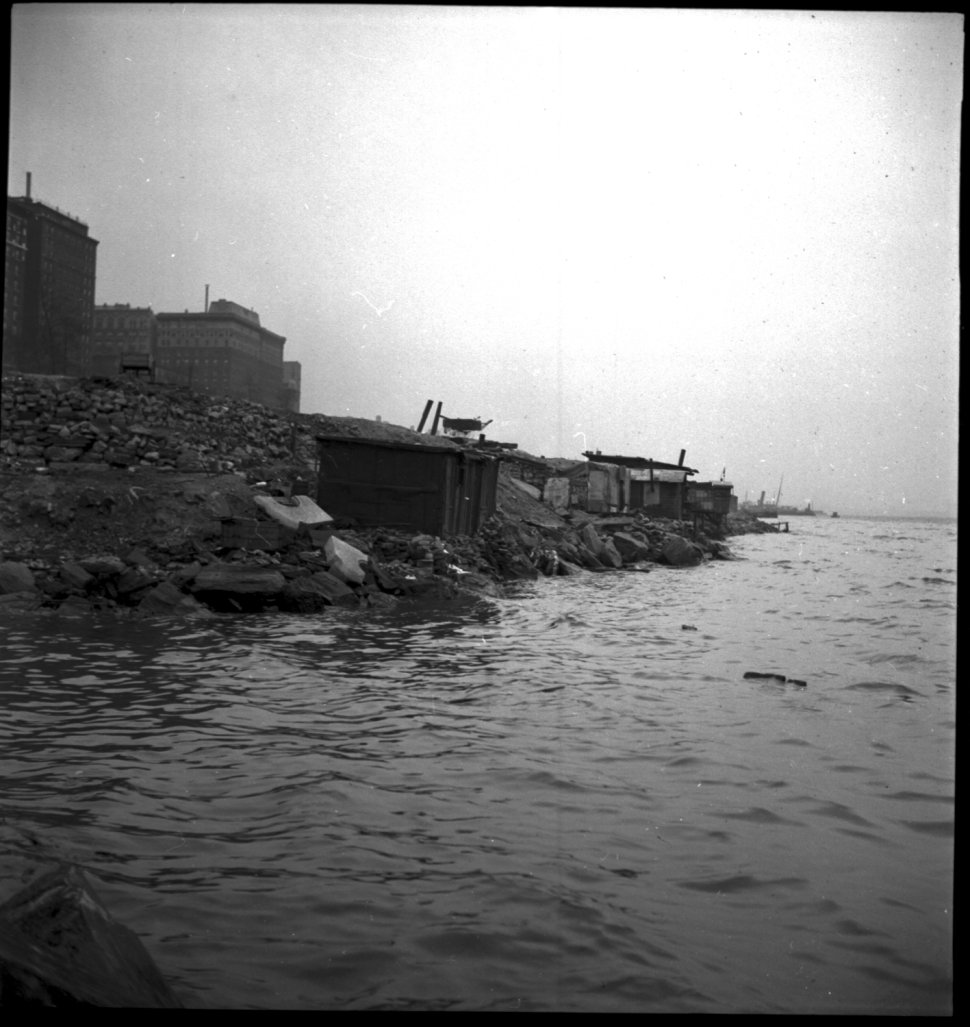 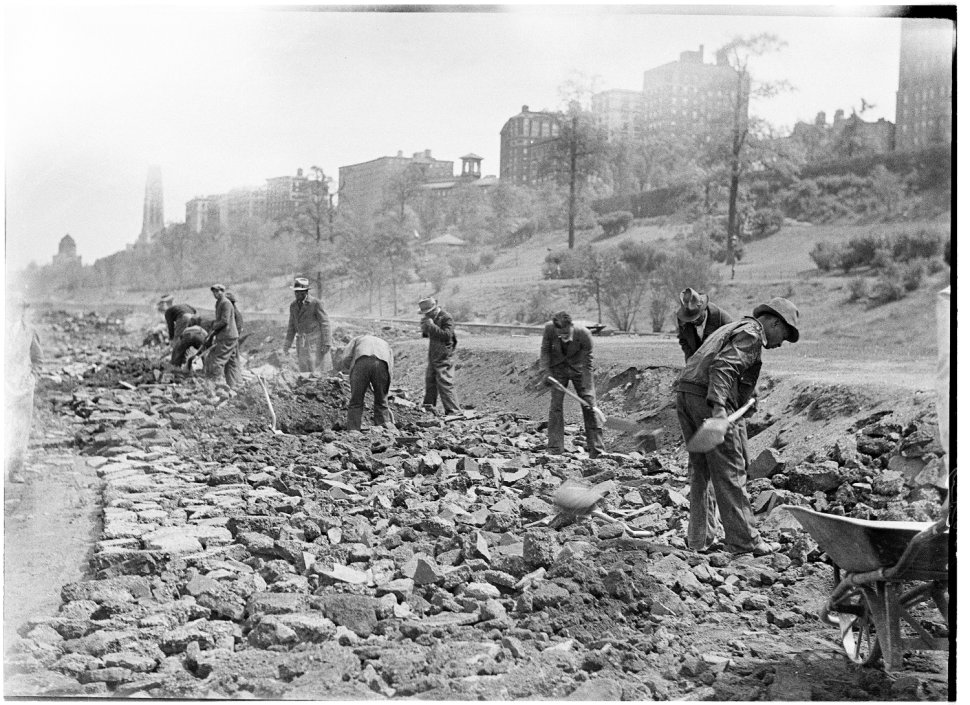 Contemporary New York City may not feature squatters’ shacks, but the sight of homelessness remains well entrenched in the urban landscape, whether it be people sleeping on the street or in parks, or panhandling on sidewalks. The diversion of homeless New Yorkers away from “reclaimed” public space became central to several sets of punitive mayoral and policing administrations, strategies that in turn pushed homeless people into the margins of publicly visible space: next to highway ramps, under elevated train tracks, and into abandoned industrial waterfront areas (Deutsche 1996; Smith 1996; Vitale 2008). But effective organizing against broken-windows policing and for homeless civil rights has produced legislation and court rulings that blunt the ability of the city to forcefully remove homeless citizens from public space. In response, the city has now moved to a policing strategy that utilizes big data and analytics from 3‑1‑1 complaints [2] in combination with the HOME‑STAT system (a tool modeled on COMPSTAT [3]) to create so‑called “homeless hotspots,” where homelessness (from the perspective of both outreach workers and those policing) becomes imagined as a concentrated area on the map (Goldfischer 2019). Rather than violent arrests, hotspots pair best with a coercive form of “therapeutic policing” that relies on an expanded infrastructure of semi-voluntary healthcare and drug-rehab programs (Stuart 2016). This results in many homeless New Yorkers being removed from a public plaza in an ambulance by EMTs, rather than leaving in handcuffs.

In the course of my dissertation research, conducted alongside the organization Picture the Homeless, I came to realize that the Department of Transportation (DOT) plaza program (or the “green plazas,” as they are sometimes called) represented a major site for understanding the city’s contemporary relationship to visible homelessness. Since 2008, the DOT, with the technical assistance of the New York Horticulture Society and other NGO partners, has worked to create plazas using green design elements such as planters and rainwater recycling systems in areas on the margins of the city, under elevated train tracks and beside highways. Many of these spaces—particularly those located in gentrifying low-income neighborhoods—were previously unregulated, meaning that homeless New Yorkers could use them for rest and socialization with less fear of harassment. 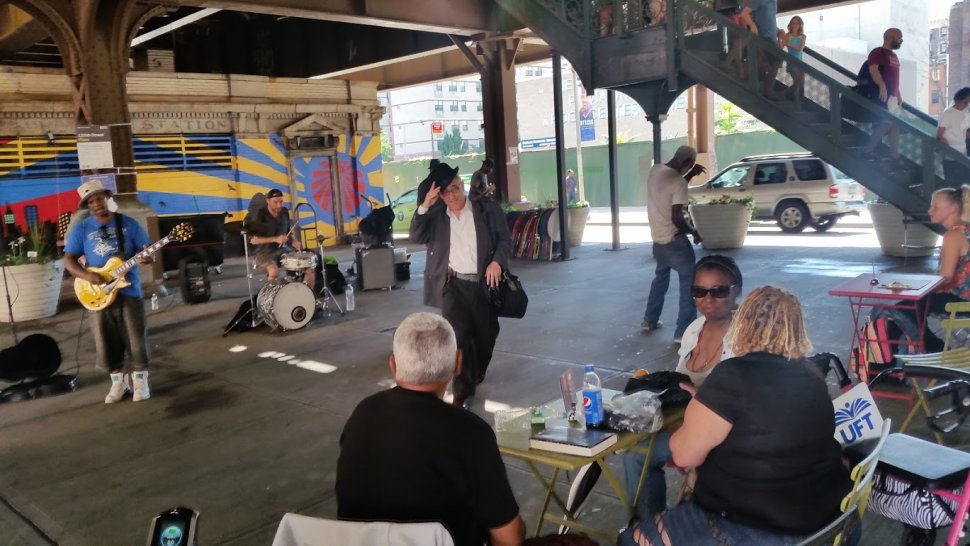 One might expect plazas to feature the same sort of vicious anti-homeless policing that marks business improvement districts (BIDs) in other parts of the country, since many of the plazas are themselves managed by BIDs. Yet my research revealed that rather than utilizing force to remove homeless people, the plaza program instead relies on its environmental design elements, along with programming (such as a heavy schedule of activities: primarily yoga classes and farmers’ markets) to instead divert the eyes of the housed population away from homeless New Yorkers in the space. As one designer revealed to me: “The homeless people are here, but … everyone else is going to be here, too, because we’re doing stuff; even if they’re there, it doesn’t matter, because you won’t see them.” This approach—using green infrastructure and public activities to mitigate and neutralize the visible presence of homeless people—may seem less nefarious than physical removal, yet, as Picture the Homeless has long argued, the way that homeless people are seen—and, crucially, not seen—has an outsized impact on housing policy. Diverting the eyes of the housed away from homeless people in public space serves to further marginalize and isolate homeless populations, while further distracting from the root causes of the present housing crisis: speculation on land, warehousing of vacant buildings, and policies that prioritize shelter over housing, such as the MTA’s diversion pilot.

As Samira Kawash (1998) noted more than two decades ago, there is something about the sight of homelessness that calls the housed viewers’ eyes away from the root causes of housing injustice. To understand that connection, we need to pay attention to how diversion impacts the ability to see and structurally understand homelessness. Diversion programs are enacted within the scope of public space improvement projects (e.g. expanding parks and plazas, improving subway service) and many of these projects come with imaginaries that suggest that their implementation can increase equality in public (Larson 2018). But recent strong resistance to the MTA police harassment of churro vendors in Brooklyn suggests that many New Yorkers are fed up with misplaced public-space initiatives that target the most marginalized citizens rather than holding accountable the agencies mismanaging these spaces, an example that provides hope for homeless activists resisting the diversion pilot. Following the lead of Picture the Homeless and other homeless-led activist groups, we must connect these policies to movements of our eyes and our bodies in urban space.

Many thanks to Rebekah Burgess at the NYC Parks Department Archive, who drew my attention to these photographs, and to Monxo Lopez at the City Museum of New York, who helped me think through some arguments. I am also grateful to Picture the Homeless, and in particular Nikita Price, whose work and methodology are central to my own thought within this project. Finally, thanks to the editors at Metropolitics, who provided incredibly helpful feedback on the initial draft of this article.

[1] Caro (1974) documents how Moses saw the squatters’ shacks along Riverside Drive as the major obstacle to the expansion of the park, but also shows how this pattern played out in other locations, including Red Hook Fields and Inwood Hill Park. Photographs of these locations in the NYC Parks Department Archive provide visual evidence of this pattern, where squatters’ shacks are pictured immediately before park expansion.

[3] COMPSTAT is short for COMPare STATistics, which was the computer file name of the original program)—is a combination of management, philosophy, and organizational management tools for police departments.