In April 2018, the Princeton Eviction Lab [1] released a nearly nationwide dataset of eviction filings and judgments between 2000 and 2016. From this work, a New York Times article identified Richmond, Virginia, as having the second-highest eviction rate of large cities in the United States. Five of the top 10 highest-evicting large cities in the US were in Virginia. These findings prompted elected officials and housing-policy advocates to argue for basic protections for tenants in a state where filing an eviction costs $58.00 and written leases were not required. The data also illustrated a challenge beyond evictions: despite organizing efforts, Richmond communities most impacted by eviction have faced more than a century of political and physical displacement that has limited community-based power to challenge housing instability and secure a “right to stay put” (Hartman 1984; Newman and Wyly 2006).

Eviction, like displacement, is not distributed evenly across the city. While the national eviction rate was 5.12%, Richmond’s eviction rate over the 16 years studied was more than 11%. In Richmond’s white West End, the rate was 3% or lower, while in some neighborhoods in Richmond’s Northside, Southside and East End, the rates were more than three times the citywide rate, meaning that more than a third of renters were evicted every year. More importantly, when controlling for factors such as income and home value, race had the strongest effect on neighborhood eviction rates. We can’t understand Virginia’s high eviction rates without examining the ongoing racialized dispossession and lack of political power in these communities.

Throughout Virginia’s history, elites have used destruction and confiscation of space to maintain white power (Campbell 2012). Starting with the imposition of slave laws before the Civil War, followed by Black Codes and Jim Crow terror, these efforts undercut African-American communities’ ability to organize and challenge the power structure. Restricted movement, curtailed rights, lynching, and harassment reminded African Americans who owned the city. State projects institutionalized and continued these patterns in the 20th century. Local white elites wielded urban renewal, slum clearance and highway projects, based in the racial categorization of communities, to destroy and perpetuate existing power and spatial distributions of African Americans in Southern towns and communities. The marginalization of these spaces then justified future policy and planning and, combined with fears of terror, challenged these communities’ ability to organize and gain political power and voice.

The thread between Richmond’s roots and current outcomes is evident in Jackson Ward, a historic African-American neighborhood settled before the Civil War in the heart of Richmond, where eviction rates now exceed the citywide rate. In the early 20th century, local and federal policy continued the restriction of Black movement in Richmond. Racialized zoning ordinances, like Richmond’s, were deemed unconstitutional in 1917, but Richmond then prohibited Black residents from living in neighborhoods whose residents they could not marry. Because interracial marriage was illegal until the US Supreme Court’s decision in Loving v. Virginia in 1967, this law crystalized the lines between white and Black Richmond. Redlining emerged in 1933 with the creation of the Home Owners’ Loan Corporation. Not only could African Americans not take advantage of Federal Housing Administration (FHA) mortgages, but those who owned houses in Jackson Ward lost value—or equity—because they could sell only to cash buyers.

Frederick Babcock, author of the FHA underwriting manual and a key figure in the emerging field of real-estate science during the 1920s, pioneered racial control as a model for securing real-estate value. Babcock indicated that race was the central dimension on which property value hinged and that property value declines “can be partially avoided by segregation and this device has always been in common usage in the South where white and negro populations have been separated” (Babcock 1932, p. 91). Jim Crow was also a form of market regulation. Segregation created a housing market that was profitable for those who did own because it was based on the exploitation and exclusion of Black people from ownership (Taylor 2019; Connolly 2014).

In the mid-1960s, after the city voted against its construction, local elites and the state circumvented the local decision to create a state agency for the construction of the Richmond-Petersburg Expressway (now Interstate 95). The highway drew a jagged line through the heart of three of Richmond’s African-American neighborhoods, bisecting Jackson Ward. Later, the Powhite Expressway and I‑195 that ran through the city would further contain African-American communities in the Southside and those that remained on the West End. These policy decisions dispossessed Black homes and business and created visible lines between Black Richmond and the rest of the city. A 1966 report from the Richmond Urban League argued that expressways were the primary factors impacting housing and mobility for African Americans: “most new expressways have come through Negro neighborhoods, displacing thousands of residents […] large-scale construction and redevelopment projects, though beneficial to the city, have failed to give adequate consideration to re‑housing displaced persons of whom 95‑100% were Negro” (1966). The report later explains that, as a result of the destruction and ongoing segregation of housing, African Americans in Richmond were concentrated in the East End, Southside, and, increasingly, the Northside. 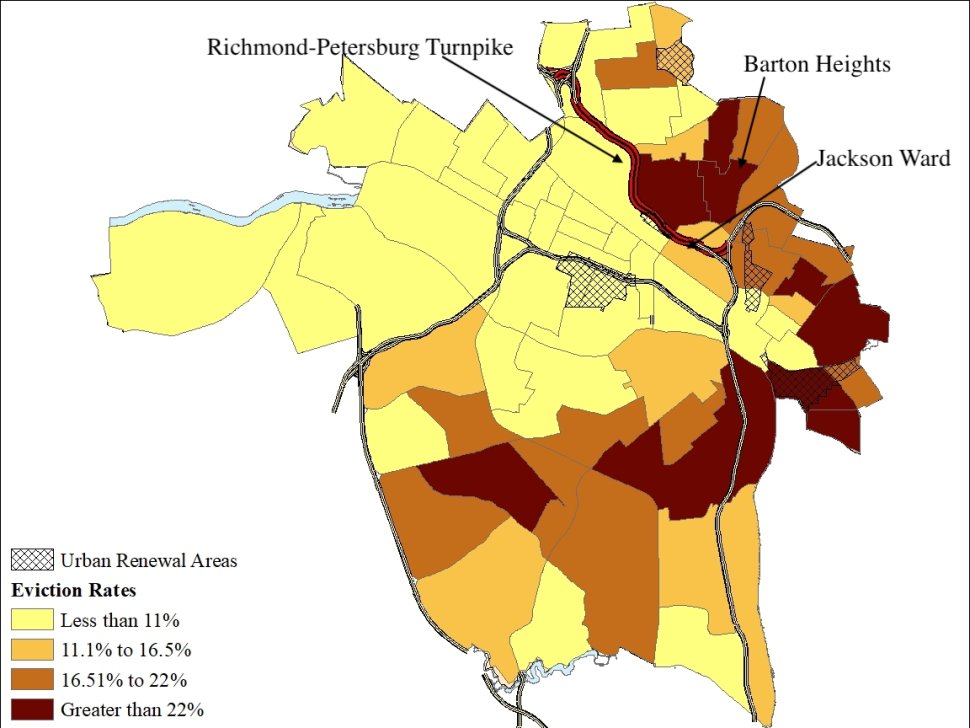 These approaches reinforced how African-American neighborhoods were viewed, or as Lipsitz (2007) argues, functioned as a way to spatialize race—and, more importantly, racialize space. Planning documents from the 1950s and ’60s ascribe problems in housing conditions caused by racial segregation to the people who inhabited those spaces. A 1961 real-estate analysis of Richmond’s housing market describes how “the poorer-educated, lower-income Negro family appears to prefer to live in homogeneous groups […] Negro family composition is basically matriarchal, which tends to […] maintain an established locational pattern” (p. 45). Typical for the period, the report fixates on racial “transition” in Richmond’s neighborhoods, noting that “preferential association is without a doubt a strong determinant in the pattern of housing occupancy […] the rate of transition was quite rapid because of the heavy demand, and fear of white residents that the value of their properties would be affected […]. The history of such areas in Richmond […] has been that they ultimately become wholly or predominantly nonwhite within an area defined by physical barriers, such as expressways, parks, streams, or other features” (Harland Bartholomew and Associates 1961, p. 45). By racializing the space, these spaces could be viewed as toxic or dangerous, justifying inaction when the next crisis emerged. It rendered them ultimately “placeless,” frontiers to be avoided, colonized or civilized by investors, government agencies, white residents and others to support future interests (Roberts 2018). These policies delegitimized African-American neighborhoods in Richmond.

And so with traumatic losses in value, and external ownership by those who could afford to purchase, housing became increasingly unstable. Further, the relegation of African Americans to renter status deprived them of political power in a city that valued homeownership and, more importantly, homeowners. The devaluation of Black—and, increasingly, Latinx—communities through policy and planning decisions by leaders in the city and state, while protecting white home values, created greater scarcity of affordable housing and forced up prices in African-American neighborhoods while leaving comparatively low-density white neighborhoods well-amenitized and highly valued. Communities where Black households were able to purchase homes experienced high rates of foreclosure. In fact, the highest-evicting neighborhoods in Richmond today were also the highest-foreclosing neighborhoods at the height of the subprime crisis. Compounding these rates, the institutional buyers of foreclosed single-family properties have eviction rates of almost 20%.

Searching for solutions to the eviction crisis

Though framed as an individual problem, this “hidden housing problem” (Hartman and Robinson 2003) has communal roots and implications. Eviction creates barriers to engagement in the neighborhood because residents expect to be displaced, because there are not enough hours in the day, and because there are risks to mobilization, reinforced by the threat and memory of ongoing dispossession of the community. Yet the destruction of the built environment within these communities serves a similar function to the displacement of individual families. Summers and Howell (2019) argue that “places are not merely defined by their physical existence, but the ways in which social practice is enabled, abridged or changed, including the ways that places are made and remade” (p. 4) and their destruction also fractures the functions of the community and the creation of a counter-public. Similarly Drake-Rodriguez (2021) argues that physical space is a critical site for mobilization and the exercise of political power.

The search for solutions to the eviction crisis in Richmond, in Virginia, and beyond must be based in a clear understanding of how policy and planning decisions have simultaneously destabilized housing and politically demobilized communities. These decisions, overtly racist in origin, are now repeated in “race-neutral” policies, charity organizations and engagement that further characterize these neighborhoods as problems to be solved, rather than spaces of identity and history. Housing policies, specifically anti-displacement policies, need to look toward ways to engage residents in meaningful organizing, decision-making and, more importantly, idea generation about how to move forward. This will require attention to the capacity of community-based organizations that have built trust and are committed to building strong, resident-driven processes and programs.

[1] Kathryn Howell and Ben Teresa are assistant professors of Urban Planning at Virginia Commonwealth University and are the co-directors of the RVA Eviction Lab.