Skip to main content
A vacant home maintained by neighbors in Detroit, Michigan © Teryn Milliner
From the Field

DIY Urbanism in Shrinking Cities: Or, What Neighbors Are Left With When Markets Withdraw and Governments Contract

Kimberley Kinder - 27 March 2017
DIY culture is one of the zeitgeists of our time. Hipster home-brewing, swing-dance flash mobs, and pop-up maker spaces are trending. These activities reflect the quirky, sexy, witty side of the DIY craze. But do-it-yourself culture has a darker side, too—a more ominous phenomenon involving more people, greater urgency, less choice, and higher stakes. For these do-it-yourselfers, DIY is not leisure, satire, or a means of enrichment. It is instead a precarious method for managing cities.
neighbors / DIY / shrinking cities / United States / Detroit
Download PDF
Series: Shrinking Cities

DIY urbanism is the duct-tape approach to collective problem-solving, an approach that, in the context of shrinkage, is often foisted on low-income communities of color. In these areas, where people have few economically and politically viable options to resist disinvestment, depopulation, and austerity, many residents resort to DIY labor to hold their neighborhoods together—if they can—sometimes literally with their bare hands.

Urban shrinkage is a national phenomenon (Pallagst 2009). Between 2000 and 2010, for instance, 138 large and mid-sized cities across the US lost population (Anderson 2011). During the same decade, 130 city, town, and village governments dissolved due to financial stress (Maciag 2013). When cities depopulate, when municipal governments face fiscal crises, when property owners walk away, when public service departments are understaffed, and when conservative politicians block meaningful social reform, DIY urbanism is what residents are left with. By DIY urbanism, I mean residents sweeping city streets, maintaining public parks, planting community gardens, boarding up empty buildings, and acting as impromptu real-estate agents and landlords for abandoned homes.

Most residents in Detroit face this situation on a daily basis. I studied this phenomenon in 2012 and 2013—the years when the financial consequences of the Great Recession were peaking and when the municipal government was entering formal bankruptcy. During those years, I interviewed residents, attended community events, and conducted surveys in several neighborhoods (Kinder 2016). The people I met voiced many concerns. Residents told me what it felt like to watch neighbors move away knowing that—within a few weeks, a few days, or sometimes only a few hours—scavengers would arrive to scrap the buildings for parts, stealing doors, furnaces, pipes, wires, bricks, bathtubs, and more. Residents worried about the public parks and city-owned lots nearby where, because the municipal public works and general services departments could no longer afford to maintain the land, the grass stood three feet high infested with vermin and the playground equipment lay broken and rusting. Residents also routinely cursed the pickup-truck drivers who cruised through the streets loaded with trash looking for blind corners and alleyways where they could surreptitiously dump their waste.

Across these neighborhoods—among people whose socioeconomic circumstances, neighborhood characteristics, and life opportunities varied significantly—a common set of responses to urban shrinkage emerged. This set of responses included DIY urbanism: a shared informal toolbox of do-it-yourself tactics for land management and community governance in the context of market withdrawal and the hollowed-out state.

One set of tactics, for instance, involved residents trying to prevent vandalism and other criminal enterprises from occurring in unoccupied housing. The first line of defense was often to disguise the vacant buildings by hanging curtains, cutting grass, raking leaves, removing junk mail, and shoveling snow to make the housing look occupied. If vacancy could not be disguised—if windows were broken or walls had holes—the next best option was to make the building look cared for: the yard maintained, the flowers blooming, the shrubs trimmed, and the facades painted. These techniques, it was hoped, would deter illegal dumping, scrapping, drug dealing, and arson. Since these soft defenses offered no guarantees, however, residents used target-hardening strategies, as well. They barricaded doors, boarded windows, and obstructed driveways and walkways. These techniques kept buildings at least somewhat secure while neighbors waited—sometimes in vain—for a new resident to move in or for the property to be condemned and demolished (Kinder 2014). 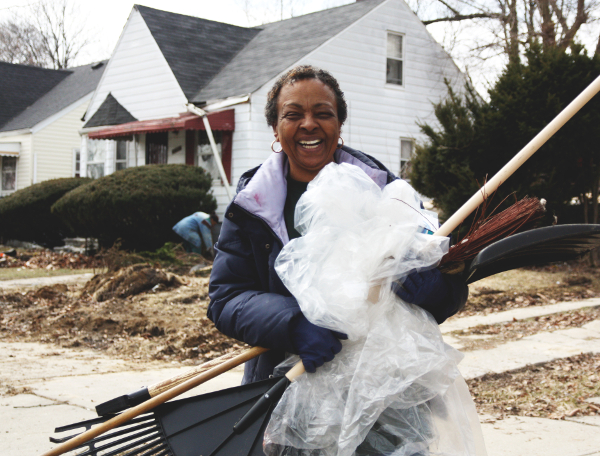 Another set of tactics involved residents trying to compensate for inadequate public works. These DIY-ers cut the grass in public parks and on city-owned lots. They shoveled the sidewalks in front of government-owned buildings and plowed the snow from public streets. They cleaned the trash that municipal sanitation workers left behind, they built informal parks on abandoned land, and they used each other’s porch lights to compensate for broken streetlights. Their goals were to keep the streets passable, keep the parks usable, and keep the neighborhood looking as though the usual rules of private property and government authority still applied.

A third set of tactics involved efforts to enhance feelings of safety by creating landscapes with eyes on the street (Jacobs 1961). Some residents arranged their curtains and shrubbery to give themselves unobstructed views of the road. Other residents developed habits of surveying, monitoring, and documenting their blocks. When something suspicious happened, residents would flash their porch lights, bang on doors, call out from windows, and make noise on lawns to let suspicious people know—without confronting them directly—that someone could see them. The hope was, if people knew they were being watched, perhaps they would be less likely to scrap a building, illegally dump trash, or vandalize a public park. These landscapes of watchfulness helped neighbors feel safe.

These various tactics of DIY urbanism were not the most natural responses to urban shrinkage, nor were they inevitable. On the contrary, the residents I interviewed tried a whole host of other things first. Concerned neighbors called absentee property owners—if they could find them—to let them know about emerging problems, but many times the owners had walked away on purpose and were more than happy to let the city foreclose on or condemn their property, just to get it taken off their hands. Concerned neighbors called the police department, the public works department, and the city inspectors responsible for code enforcement, but all too often these understaffed, underfunded entities were already too busy with other pressing concerns to help residents address or resolve their grievances. Concerned neighbors called local block clubs, churches, and community development agencies asking for assistance, but although those entities offered a sympathetic ear, they usually abstained from getting involved, perhaps because they only worked on some streets and not others, because they only dealt with educational concerns and not environmental ones, or because they had already allocated their grant money for the year and had no resources left to spend. With those avenues exhausted, residents sometimes launched their own grassroots initiatives or raised rallying cries for political change. As important as those efforts are, they were often short-lived or the benefits came at a glacial pace compared to the rapid rate of disinvestment and deterioration. In other words, people tried working through official channels, political networks, civic agencies, and networks of social capital, but the lackluster results easily shattered residents’ faith in the systems that were supposed to protect them and stabilize their neighborhoods.

In this context, DIY urbanism gained traction. Campaigns for large-scale, long-term reforms remained important and are still ongoing. But in the meantime, doing-it-yourself was one of the few immediate actions residents could take to mitigate the consequences of disinvestment, neglect, and vandalism festering in the aftermath of urban shrinkage.

These strategies were somewhat effective. DIY activism did make a difference. House by house and lot by lot, residents used DIY urbanism to protect housing quality, improve public spaces, and encourage positive social interactions in their neighborhoods. In the absence of strong markets or strong governments, these do-it-yourself methods became popular de facto techniques for informally managing property and addressing issues of common concern. These techniques influenced where people decided to live, what it felt like to live there, and how people enacted authority through space—three themes I explore in the recently published book DIY Detroit: Making Do in a City Without Services (University of Minnesota Press, 2016).

Those benefits aside, DIY urbanism was difficult, demoralizing, exhausting, and unfair. Detroit’s do-it-yourselfers were maintaining other people’s property and making up for other people’s negligence. They compensated for banks that failed to secure and maintain foreclosed homes, residents who walked away and abandoned their land, state officials who canceled revenue-sharing agreements stripping the municipality of funds, and business owners who closed down or moved out to the suburbs. This cumulative disinvestment left the residents who stayed in Detroit and the newcomers moving into Detroit with the nearly impossible workload of managing other people’s spaces: the private land other people disowned and the public realm government entities could no longer afford to maintain. Carrying this backbreaking workload was neither fair nor easy. DIY urbanism helped, but all too often it amounted to patching holes and treading water. It was a drop in the bucket of what needed to be done to cope with urban shrinkage. The DIY paintbrush was no panacea, and the DIY hammer could not “save” Detroit.

DIY urbanism has nonetheless become crucial not only in Detroit but also in countless other shrinking cities, underserved neighborhoods, and hollowed-out municipalities. Long-term structural solutions would be better, but they are slow in coming and may never arrive. In the meantime, disguising a vacant house, mowing a public park, and putting eyes on the street buys time by slowing decay and enhancing feelings of comfort and safety while living amid disinvestment. This variant of do-it-yourself culture is decidedly unromantic. But with so many cities nationwide cutting basic services, with so many municipalities on the edge of bankruptcy, and with so many neighborhoods underserved by private markets, it is time to understand what the future of DIY urbanism might look like. In our times of austerity and market-based governance, DIY urbanism is likely on the rise and here to stay.

Kimberley Kinder, “DIY Urbanism in Shrinking Cities: Or, What Neighbors Are Left With When Markets Withdraw and Governments Contract”, Metropolitics, 27 March 2017. URL : https://metropolitics.org/DIY-Urbanism-in-Shrinking-Cities.html