Skip to main content
Public art on the theme of memory on Avenida 26 in Bogotá © Violante Torre, August 2017
From the Field

Violante Torre - 7 April 2020
After more than five decades of conflict, the Colombian capital, Bogotá, is undergoing processes not just of regeneration, but also of commemoration. The decision to create spaces of memory along one particular road in the city, Avenida 26, has highlighted the stark differences between neighborhoods on either side of its congested lanes—and runs the risk of reinforcing existing segregation.
conflict / urban regeneration / urban renewal / memory / commemoration / institution / memory-making / Colombia / Latin America / South America / Bogotá

Bogotá, Colombia, is a socially divided city in a post-conflict country marked by clashing spatial and cultural cleavages. Over the last 20 years, institutional investments have concentrated on the renewal of the city center in order to boost Bogotá’s image. At the same time, the end of the Colombian conflict has led to the proliferation of a politics of memory in the city. The politics of memory, driven by the pedagogical imperative of “never again” (Bilbija and Payne 2011), expose the difficult task of imagining spaces as contemplative and as sites of reconciliation through their portrayal of past events in the conflict (Jelin 2002).

The street known as Avenida 26 (Figure 1)—at the center of my four-months-long fieldwork—is a key space for analysis of the city’s regeneration programs and politics of memory. The case of Avenida 26 demonstrates the tensions between urban development and memory-making. It reveals how institution-led production of “spaces of memory” (Huyssen 2003), as cultural spaces dedicated to commemoration and remembrance, also play a crucial role in the process of gentrification and the exclusionary dynamics in the city. Sites of national memory on Avenida 26 reflect strategic plans to build a protective barrier from urban violence and conflicts for the city’s middle class while at the same time further marginalizing low-income residents. These are the same residents who are often most directly touched by the conflict and for whom the politics of memory are officially dedicated.

Figure 1. Avenida 26 and its key features 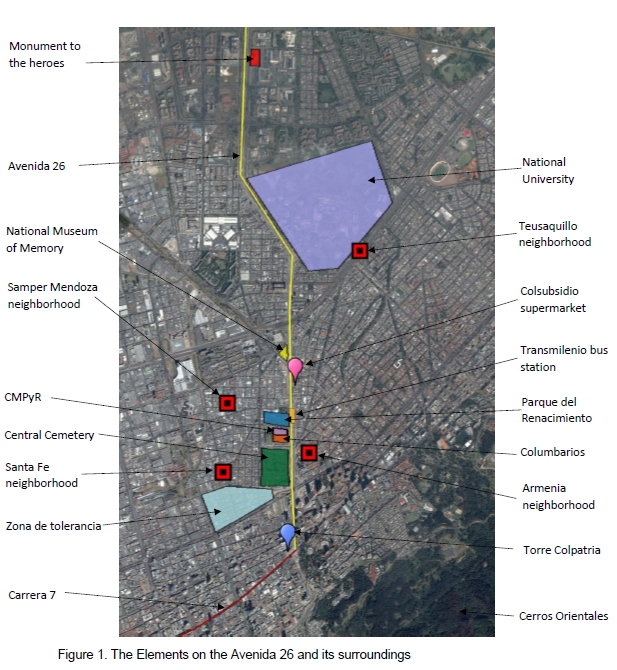 “That [a museum] is like for kids who are studying […], it’s not for everyone, for example, for me […] why should I go to a museum, what for? All these museums, what for? […] For me, my museums are my flowers,” said Catalina, a flower seller, in a half-sarcastic, half-bitter tone. [1]

Catalina is referring to the future National Museum of Memory of Colombia, which is slated to open in 2021 as a space for reflection over the Colombian conflict. [2] The museum will be built on Avenida 26, where Catalina’s flower stand is located. As she speaks, her voice almost fades into the roar of traffic. The street is one of Bogotá’s main thoroughfares. It is nearly 14 kilometers (8.7 miles) long and as wide as a highway. It is one of the most congested streets in the city (Figure 2). 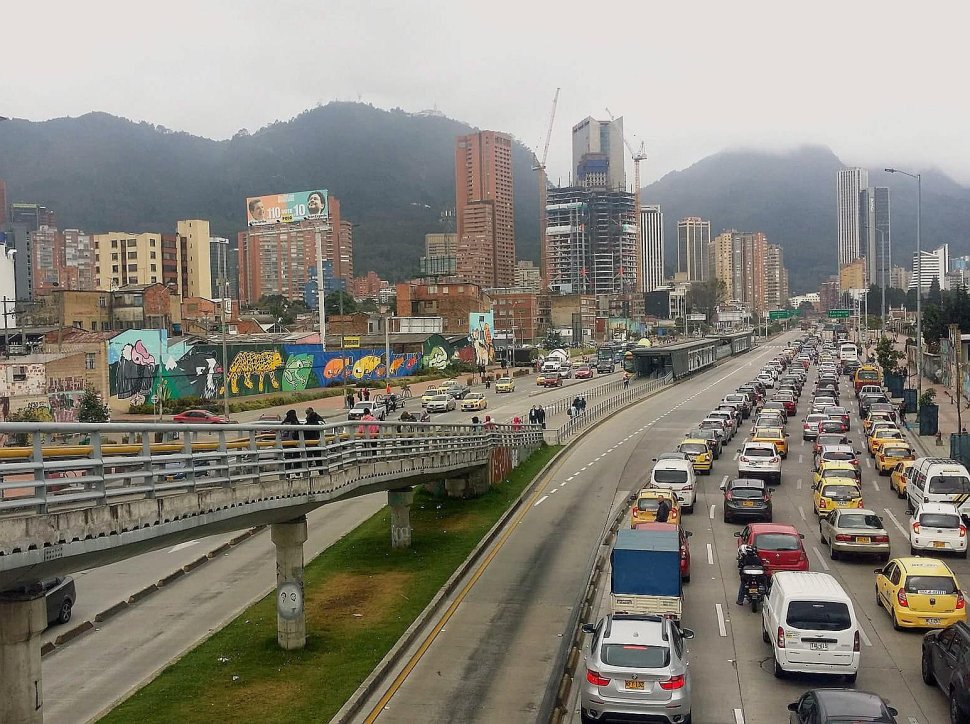 Avenida 26 is central to Bogotá’s politics of memory. In 2012, the Center for Memory, Peace and Reconciliation, or CMPyR (Centro de Memoria, Paz y Reconciliación; Figure 3), opened next to the city’s central cemetery, where florists and candle sellers have their stands. Public art on the street [3] portrays the Colombian conflict. In 2014, the municipality renamed the section of Avenida 26 that hosts these cultural initiatives Eje de la Paz y la Memoria, or “Axis of Peace and Memory.” In 2016, a new park, Parque del Renacimiento (“Park of the Rebirth”), was opened.

As a highly congested major thoroughfare, Avenida 26 does not correspond to conventional spaces of memory. Many institutional representatives define it as an empty space or a “blank slate.”

“It’s like a corridor: when you cross it in some way you are inhabiting a place that is not a place where one would stop to contemplate […] that is to say it is a non-place,” a member of IDARTES (a body which promotes public art initiatives on the streets of Bogotá) said.

The imaginary of Avenida 26 as a non-place among public officials reveals their uncomfortable awareness that Avenida 26 is an extremely segregated—and at times violent—place. The renamed section of the avenue—the “Eje de la Paz y la Memoria”—divides two very distinct neighborhoods: the middle-income neighborhood of Teusaquillo on one side, and the deprived and extremely precarious neighborhood of Santa Fe on the other. It would seem that the urban violence that characterizes the avenue would make it unsuitable for commemorative practices, yet officials have focused significant public resources in creating cultural institutions of public memory along this route.

“The side that is in Teusaquillo is cool, I have friends working with screen printing, who have a cultural center, there is the graffiti […]. In front of the cemetery [on the Santa Fe side], it’s very ugly, people steal and at night there are many homeless people […], I really prefer not to be there,” said Santiago, a skater and graffiti artist, capturing the geographical imagination of the street as a divided space.

In this context, the siting of the CMPyR and the future Museum of Memory, as well as ancillary museum initiatives, on Avenida 26 is not unintentional or strictly about memory. They represent selective investments on one side of the street in the middle-class neighborhood of Teusaquillo, and not on the Santa Fe side. The siting of these projects on Avenida 26 is not due to the relevance of this place for commemorative purposes, but instead acts as a revitalization strategy that encloses the more economically viable neighborhood through cultural projects as a means of shielding this neighborhood from the poverty and urban violence on the other side of Avenida 26. A member of the current CMPyR administration mentioned this selective use of the street when sharing his unease over being located to what he perceives as the “wrong” side of the street: “We work looking at that side [pointing to the Teusaquillo side], or we go to the mayor’s office, but we don’t go over there [the Santa Fe side]. […] One is always between two parallel worlds. Let’s say that, among ourselves, we know that on the other [Santa Fe] side there is the jungle.” 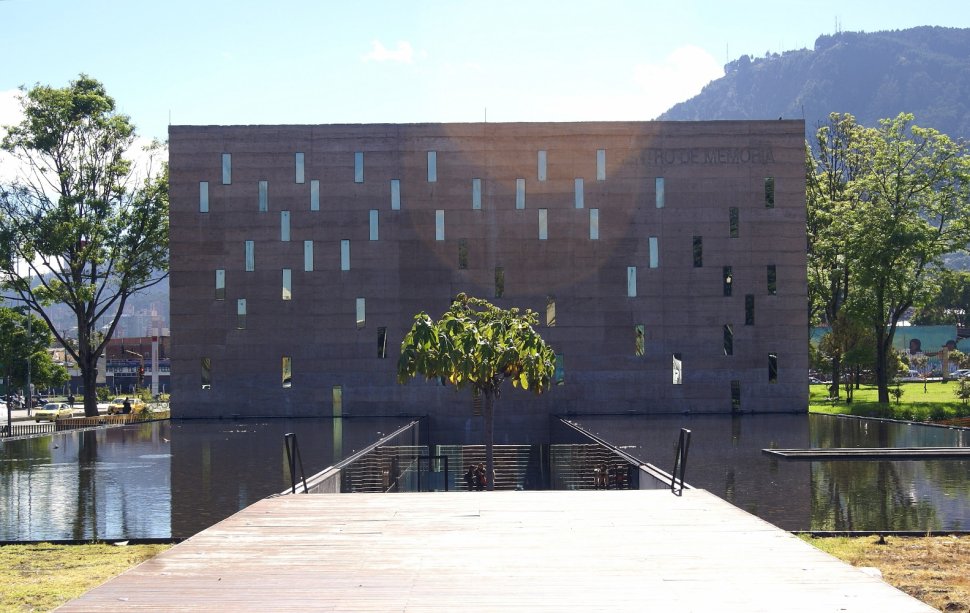 In this scenario, Avenida 26 acts as a true frontier between two neighborhoods that memory professionals deem to be incompatible. Indeed, cultural actors and memory professionals seem to identify two different Avenidas: one apt to welcome initiatives and spaces of memory; the other inaccessible due to urban violence.

The consequences of this enclosure are detrimental to the low-income communities on the Santa Fe side of the street. Gates and security guards around the CMPyR contribute to a significant securitization of this area. Candle and flower sellers on the Santa Fe side, who work informally, face increased policing, disrupting their business and limiting their ability to develop a regular clientele.

The marginalization and exclusion of these residents is even more evident symbolically. Interviewees on the Santa Fe side of the street are mostly uninformed of the activities of politics of memory—for example, they often confuse the CMPyR with a monument. They are also limited by a linguistic barrier. For example, memory, a common word in public art projects (Figure 4) and part of the title of the CMPyR—is an unfamiliar concept to many of these residents. The vocabulary employed by memory professionals reinforces a social and symbolic barrier among actors sharing the same space. This, in turn, contributes to the general indifference of many people in Santa Fe toward spaces of memory, and often results in explicit opposition to politics of memory on the street.

A kiosk owner near the Parque del Renacimiento expressed her rejection of the politics of memory through her concerns about the present and her children’s future, “I’m not interested in who is buried there, why he died, why it’s called memory […] I want my children to be well, [I want to know] what time my daughter gets home, because if she is late then what happened to her? […] How can I be interested in this bullshit?”

Figure 4. One of the sponsored pieces of public art on the street 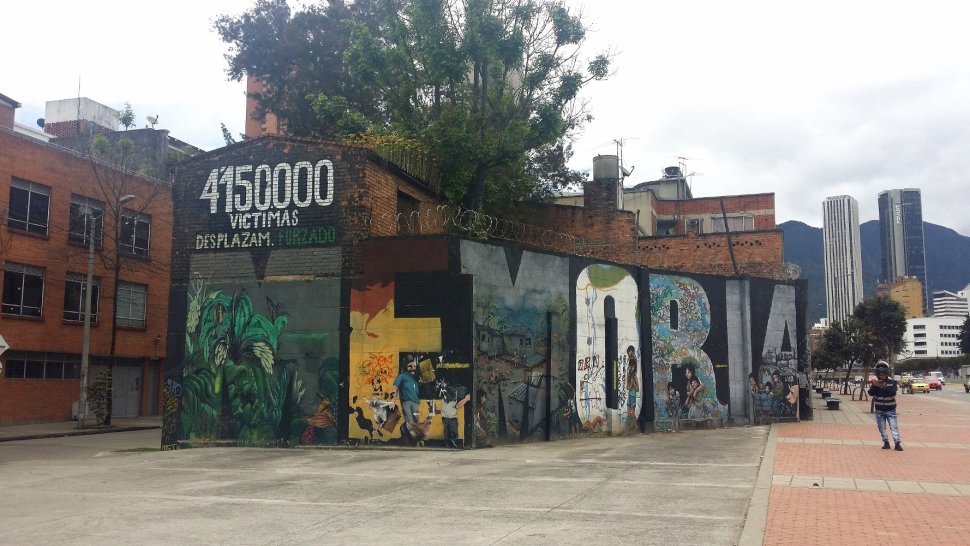 Avenida 26 is not a blank slate. It is a “lived space” made of uses and practices that politics of memory dismiss (Lefebvre 1974; de Certeau 1990). These regeneration plans ignore residents’ use of space and relation to memory by relying on cultural tools and a language that excludes them from participation. Avenida 26 highlights the necessity to think of spaces of memory as urban spaces whose function extends beyond their commemorative role (Till 2012). This case demonstrates how the appropriation or rejection of spaces of memory is dependent on urban dynamics—social inequalities, spatial segregation, and access to resources—influencing both the appropriation of spaces of memory and the possibility that a sense of belonging among local actors may flourish (Palermo and Ponzini 2014).

Finally, the role played by the imperative of “never again” in gentrification and displacement is far from being an exclusively Colombian phenomenon. Across the globe, cities are increasingly taking a stance over episodes of the past at a national scale and publicly displaying it for collective engagement (as in post-apartheid Johannesburg, or in post-9/11 New York, among others). Academic and policymaking literature needs to deepen our understanding of the intricacy of these dynamics and the problematic cultural undertakings in such processes. If remembering is indeed a right as well as a duty, “walking down memory lane” should represent an exercise of citizenship and not the rationalization of social and spatial segregation.

[2] For more information on the Museum of Memory (in Spanish), see: http://museodememoria.gov.co.

[3] For more information on the CMPyR and the call for public art (in Spanish), see: http://centromemoria.gov.co.