At the beginning of the film The Last Black Man in San Francisco (2019), which takes place in the not-so-distant future, a curbside preacher asks passersby why San Francisco is only now cleaning the Bay when residents have lived by its toxicity for decades. The cleanup is not for us, he yells, our neighborhood is “the final frontier for manifest destiny.”

The preacher’s reference to manifest destiny is the urban-frontier myth at work. Originally theorized by geographer Neil Smith, this myth shows how American frontier language (“frontier,” “pioneer,” and “Wild West”) is used to justify gentrification and displacement. Smith names the myth to pinpoint what’s lurking behind the language: “the gentrification frontier is advanced not so much through the actions of intrepid pioneers as through the actions of collective owners of capital. Where such urban pioneers go bravely forth, banks, real-estate developers, small-scale and large-scale lenders, retail corporations, the state, have generally gone before” (Smith 1996). Through frontier language, gentrification is understood as rugged individualism instead of a phenomenon rooted in social, political and economic forces.

The myth of the urban frontier reveals the power that stories have over place. The American frontier has always relied on complex justification narratives of white-settler colonialism—taking land and continuing to live on it requires stories about hate, fear, obsession and erasure (Tuck and Yang 2012). The same is true for the story created by urban-frontier language—longtime Black and Brown residents are erased, neighborhoods are devalued and then “discovered” through gentrification. But this is not the only kind of story. Another kind of story, what I am calling an “alternative narrative,” centers Black and Brown communities and can begin to appropriate urban spaces through collective land stewardship.

The revitalization of the Bronx River has all the seeds of a great story. Those involved have mythical accounts of hauling cars out of the water and building parks from trash heaps. Many will talk about the importance of collective power and unexpected partnerships. Several say that they were lost until they “found” the river.

Also, it’s a river. Rivers and most American waterways are uniquely common spaces. Unlike public parks and plazas, waterways are not owned by a city, state, or federal agency; they are governed by English Common Law, which secures the water as a public highway. The law creates spaces that, in some ways, can remain outside the context of American land ownership.

The Bronx River story has three acts: the Upper River, the Lower River, and their unification. Act I begins in 1974 when Bronx resident Ruth Anderberg fell in love with a northern portion of the upper river, which runs from West Farms Square to 233rd Street. Once she realized that this was the same river as the one covered in trash at West Farms, she began a public cleanup project, enlisting police chiefs, local residents and friendly crane operators. Filled with everything from cars to pianos, the river was part archaeological site, part landfill. Anderberg’s efforts eventually turned into the Bronx River Restoration Group, a nonprofit that led restoration efforts and a youth workforce program until the late 1990s (DeVillo 2015). 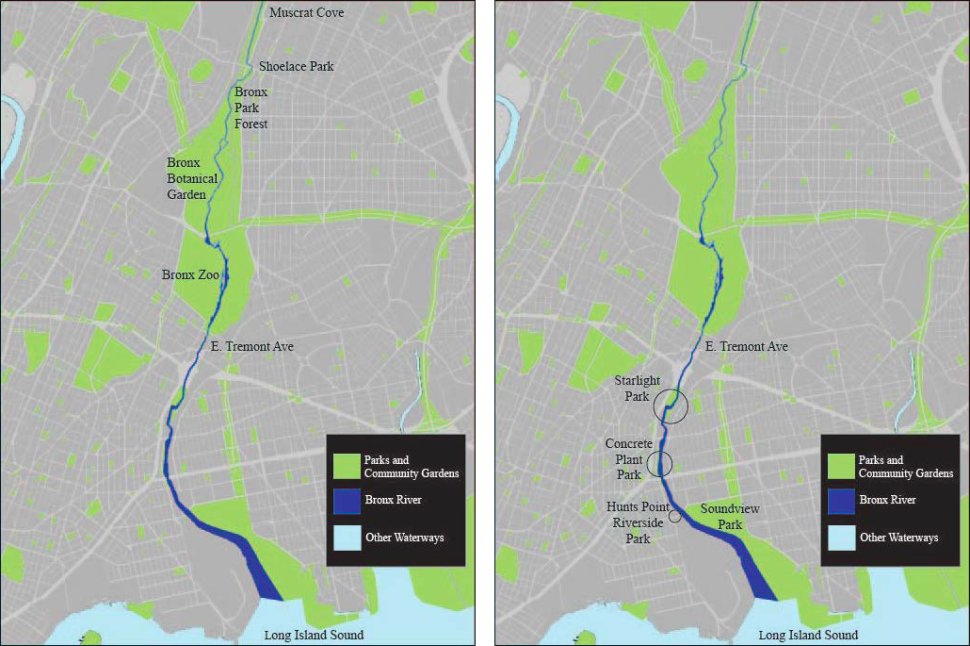 Act II’s star, the Lower River, which runs from West Farms Square to Soundview, was overshadowed by the catastrophic impacts of government disinvestment in the South Bronx (Gonzalez 2006). One interviewee who lived in the Bronx in the 1970s said that, “as a teenager, I was ashamed of living in the Bronx […] we became the symbol of urban decay, we became everything that can go wrong in a city.” Media and popular culture, like the 1981 blockbuster hit Fort Apache, perpetuated the urban-frontier myth, showing the South Bronx as both terrifying and alluring, rather than as a neighborhood neglected by the government.

In the following decades, community-based organizations like Banana Kelly and The Point CDC spearheaded community investment and provided critical social services. Vacant lots became community gardens and a movement of community reliance grew. The river, however, remained cut off by industrial lots.

Act III opens with city and federal investment in the river. The Parks Commissioner dubbed 2000 the “Year of the Bronx River” and committed federally allocated restoration funds to the river’s revitalization. NYC Parks seed grants helped develop two community-designed parks, connecting the South Bronx to its waterfront. Once there was waterfront access to the Lower River, organizations from both sections formed the Bronx River Alliance. From early on, the Alliance led creative community events to bring attention to the river.

Today, the Bronx River is a physical manifestation of community power. The same interviewee who had said she was ashamed of the Bronx as a teenager described “finding” the Bronx River decades later with her children. “You have to teach new people who come here who might think the river is dirty,” she said. “You have to show them the restoration efforts. This river is used for community building. This river is about community.”

The parks conceived by Bronx residents and activists reflect a story of collective power and appropriation of space. Concrete Plant Park (CPP), a waterfront park designed by community members, reflects how the alternative narrative is also ingrained in its design choices.

In the early 2000s, Youth Ministries for Peace and Justice (YMPJ) used NYC Parks’ $10,000 seed grant to create a youth-led park design for an abandoned concrete plant. As part of their design process, they visited a waterfront park in Westchester County (immediately north of New York City). They saw that the park in this whiter and wealthier community invited people to the water’s edge with green space, whereas most of the parks in the Bronx had asphalt. Their design choices reflected a choice to honor their history and look towards the future. They incorporated passive recreation, a boat launch, and the retention of the concrete plant structures as a reminder of their past. As one interviewee from YMPJ described his experience of CPP, “the concrete plant acts as a visual story for the park: the story of repurposing, the story of community power, the story of what could be done.”

The concrete plant relics, park design, and ongoing community-led programming are a visual representation of an alternative narrative about how to claim space. This is not a simple story. CPP was not only metaphorically appropriated; the site was removed from city auction and transferred to the Parks Department as a permanent park. And CPP was not created by a design survey and a neighborhood campaign alone—the transformation of CPP has taken over 20 years and is the result of community advocacy, citywide partnerships, and federally secured funding. Similar representations of community power and creative partnerships are found in parks throughout the lower portion of the river, from Starlight Park to Hunts Point Riverside Park. 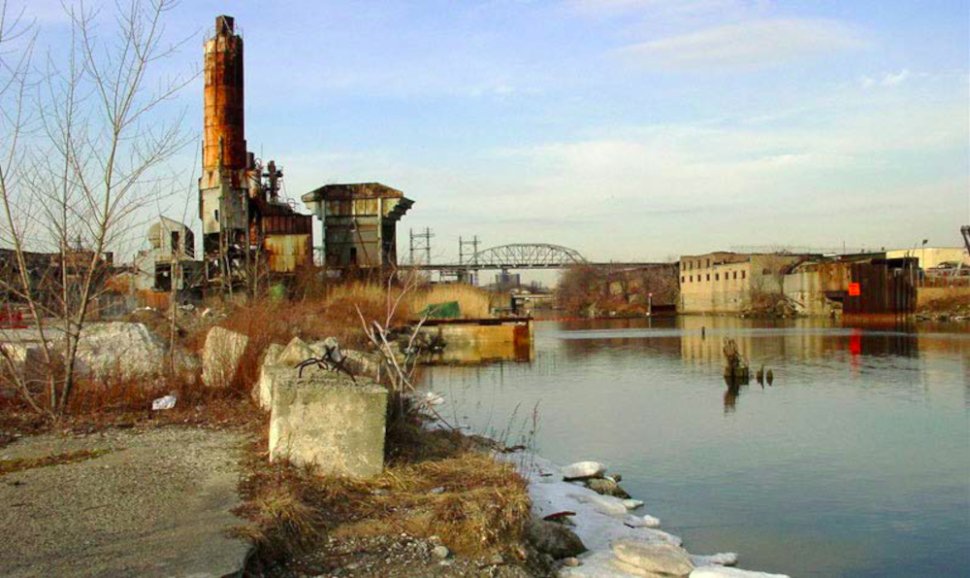 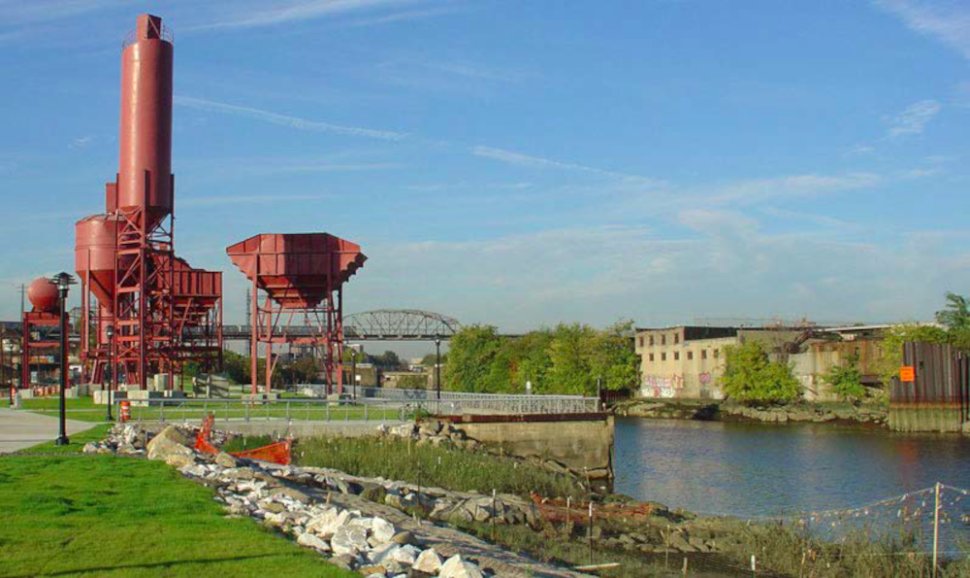 Interviewees born and raised in the Bronx consistently spoke about the transformation of themselves and the Bronx River as part of the same story. As urbanist David Harvey states, “the right to the city is far more than the individual liberty to access urban resources: it is a right to change ourselves by changing the city” (Harvey 2008).

An interviewee in her late twenties said, “I didn’t know anything about the Bronx River growing up, except that my grandfather’s brother died on it in the late ’70s. For me and my family, it was like, you don’t go to that place, it’s dangerous.” During college, she wanted to leave the Bronx in order to study the environment, but she became involved with the Bronx River Alliance and its stewardship efforts. When she took her grandfather to see the river, she said that “he was so amazed by the transformation. And I think part of this whole transition in me has been about changing the perception of those who are close to me who have always said, ‘No, you don’t go there.’”

There are a couple of layers to this anecdote. First, this interviewee is young in the context of the Bronx River story. Without the previous decades of work spent appropriating space and establishing stewardship institutions, she may have left the Bronx to feel professionally fulfilled. Second, the story grew in a way that made room for her. It shifted from the manifestation of a frontier narrative placed on the Bronx—one of fear, danger, and otherness—to an alternative narrative that was generated by the people who lived there.

A search for justice stories

After the preacher in The Last Black Man in San Francisco questions the intended beneficiary of the Bay’s environmental cleanup, we watch as our protagonists, two young Black male San Franciscan friends, try to lay claim to their childhood home and, ultimately, to their narrative of belonging in San Francisco. The movie starts by satirizing the all-too-common story of green gentrification, where the cleanup of a toxic site is the harbinger of neighborhood displacement, and ends by illustrating the lonely battle of a Black man attempting to prove home ownership through his story alone.

The Bronx River story, so far, is different. The river’s restoration was fueled by the incumbent community and its ongoing grassroots revitalization reaffirms their presence. Anchor institutions have helped to employ residents and keep them in the borough, if they want to stay there. Countless collaborative partnerships at the federal, city, and local level have enabled the transformation of the river. The Bronx River story is also not over. New waterfront developments are cropping up along the river as market-rate housing blooms in nearby gentrifying neighborhoods. Banana Kelly, The Point CDC, and Youth Ministries for Peace and Justice are now part of a coalition of groups challenging the city’s rezoning of the Southern Boulevard in the South Bronx. What happens next is the cliffhanger.