The Americanization of French social movements? Community organizing and its discontents in the banlieues

The structural decline of progressive political parties (and especially the Communist Party) in poor French neighborhoods has created a vacuum that has left residents disorganized and unable to respond to the growing inequalities they face in the wake of neoliberal globalization. In this context, the American community organizing tradition has appeared as one solution to a collectively agreed-upon problem, the absence of banlieue residents’ voices in politics and policy debates.

The diffusion of community organizing traditions was made possible through the influence of French activists’ networks linked to American and British organizers, most prominently leaders of Saul Alinsky’s Industrial Areas Foundation (IAF) and the once-powerful group ACORN. [1] Funding was provided by American philanthropic foundations and the US embassy in Paris, with officials in these organizations aiming to assist the emergence of French leaders of immigrant descent. Yet despite these resources, it is not certain that the direct transfer of community organizing will result in the creation of many sibling experiences in France, owing to the resistance observed in some leftist circles to this “Americanization of social movements.” American community organizing practices may nevertheless impact French civil society more subtly, by affecting its repertoire of action and its strategies. This cross-cultural transfer has allowed a few groups to gain victories and to tackle issues such as racial discrimination that remain hard to publicize in the French context.

The new face of American imperialism?

Under a long-standing program to raise the profile of the US, first during the Cold War and then in the context of the fight against radical Islamism, the US diplomatic corps scouted and invited French leaders and activists to travel to the US in February 2010 in order to discover the methods of community organizing. The trip brought nearly two dozen activists from the banlieues to Chicago to meet with US-based organizers and organizations, and resulted in several of the activists forming Studio Praxis, a community-organizing training body in France, the following year. Studio Praxis has spun off several campaigns, including Stop le Contrôle au Faciès, which targets racial profiling by the police. Another group of activists began Graines de France, a similar organization.

Photo 1. In 2012, the presidential candidate François Hollande endorsed Stop le Contrôle au Faciès’s proposal to create an “identity check receipt” to avoid racial profiling by the police. He did not push the reform forward once elected, however. 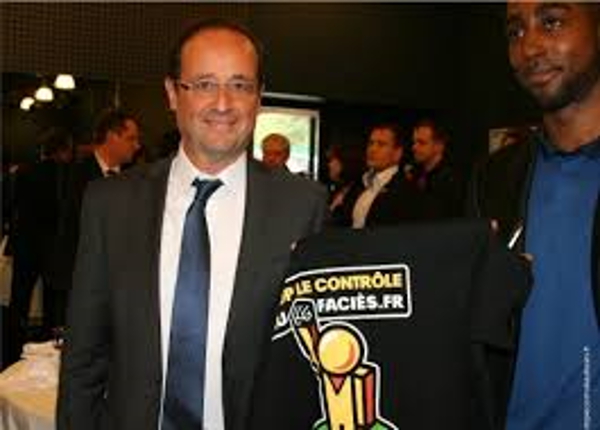 The ambitions of US diplomacy in the banlieues were put in the spotlight at the end of 2010, with the exposure of internal documents from the American embassy in Paris by Wikileaks. Among them was a note written by the then-ambassador entitled “Minority Engagement Strategy.” This document stresses “the need to improve the skills and grow the confidence of minority leaders who seek to increase their influence. […] While reinforcing mutual trust and understanding, we seek to help France’s next generation improve their capacity to lead in their communities, while also conveying the importance of transcending the bounds of their own communities in order to make a broader, national impact.” [2] The community organizing training in Chicago takes place in this broader strategy of grooming French minority leaders. While the presence and interest of the American diplomacy in the banlieues has been discussed since at least 2008, the Wikileaks cables created a significant controversy, spurred in particular by far-right activists and bloggers who claimed that the US was trying to impose its multicultural and “communitarian” agenda on the French Republic.

While they took a few more years to arrive, attacks also came from the far left. Quartiers Libres, an influential website among banlieue activists, has made French community organizers a target of choice. Leftists’ main criticism is that social movements are inevitably co‑opted:

“[O]ne always ends up ‘thinking what one is fed’. […] Their funding sources are often opaque and multiple, as their funders have no interest in disclosing their goals. Their true motivations are blurred into ‘newspeak’ language that allows them to claim simultaneously to be anticapitalist, racialized, citizen-oriented, entrepreneurial, and actor-centered. Hence it becomes possible to present oneself as an organizer of struggles against racial discrimination and economic injustice while in the meantime mingling with CEOs and the government, who, as everyone knows, are the avant-garde of the fight against racism and economic injustices in our neighborhoods.” [3]

In another article, they conclude, more bluntly, that “Soros foundations are nothing less than instruments in the hands of American imperialism.” They add personal attacks about the lack of political clarity of Studio Praxis, questioning the professionalization of activism linked to community organizing. While similar discussions have taken place among the American left (INCITE! 2007), they have had a significant impact in the French context.

Cultural gaps and the ACORN model

Another network of community organizations, L’Alliance Citoyenne, begun by activists in Grenoble with contacts in the US and Great Britain, and which has since spread to several other cities, took the Alinskyist model as its starting point, working with existing organizations and religious congregations in the banlieues. But Grenoble activists felt the Alinsky model had a number of limitations, first and foremost the fact that it provided for the mobilization only of already active members of associations, making it hard to extend the reach of the organization beyond these representatives. After months of inquiry—and discussions with academics, including myself—they decided to explore the ACORN model of organizing, aimed at targeting “the unorganized” through intensive use of door-to-door canvassing. They therefore contacted Wade Rathke, the founder of ACORN, who answered their call for help and advice. Rathke was at the time investing in the international development of ACORN, in the wake of its US dismantling in 2010. After several internet exchanges and direct meetings in Europe with the Grenoble organizers, a training course was planned in the summer of 2016 in Paris, bringing together the different (recently established) European branches of ACORN (mostly in the UK, but also in Rome and Prague). While the training was participatory—each participant being successively a teacher and a student—Rathke played an important role. Training sessions were held on different aspects of community organizing, but Rathke’s influence was clearest during a session focusing on the economic model. Sharing his own experience, he tried to overcome the skepticism of many French organizers who felt uncomfortable asking for money during their first encounters with potential members. Rathke insisted that this was necessary to get dues-paying members and therefore to ensure the financial self-sufficiency of the organization. Some participants felt, however, that the economic model had to be adapted to the French context, where it is apparently harder to speak about money with strangers. 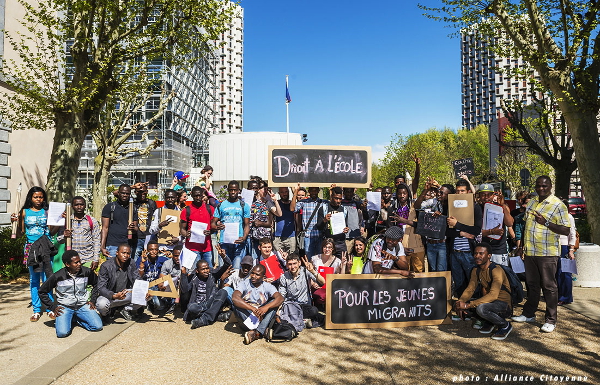 Bumps in the road

Criticism aimed at American-style community organizing in France has made it less profitable in the French activist milieu. Some now see the French community organizers as opportunists and tend to keep their distance from them. Few new collectives making direct reference to community organizing have emerged in the last year. Beyond the critique of the invisible hand of American imperialism, there might be more structural reasons explaining this slowdown. First, there are few financial resources available. At a more fundamental level, many nonprofits and social workers active in France’s poor neighborhoods mistrust the radical spirit embodied by community organizing. Mostly financed by the state and local governments, these associations need to maintain cooperative relationships with established institutions, putting them at odds with the tactics of the French community organizers so far (Neveu 2016). Even within circles sympathetic to community organizing, some see the practice as overly demanding for organizers, especially when it comes to recruitment strategies and the need to reach quantitative goals. Since the move of L’Alliance Citoyenne to the ACORN model, several of its allies in other cities have criticized its focus on numbers as embodying a form of “managerialization” of activist practices (such discussions emerged after the ACORN training mentioned above). Finally, some argue that American community organizing is culturally incompatible with French activist practices. Beyond the two cultures’ different relationships to money, many old-timers on the left remain skeptical when the word “community” (communauté in French) is mentioned. They see community organizing as unsuitable to a society that does not recognize “communities” and where class remains more prevalent than race as a determinant of social hierarchies. [4] Due to this internal and external opposition, it appears that the rise of community organizing in France might be short-lived.

America: asset or burden in the French context?

Despite these recent difficulties, the American community organizing tradition remains an appealing model to many French activists and social workers. While they might not implement an orthodox version of it, many of the principles of community organizing have infused the banlieue activists’ milieu. While the repertoires of French nonprofits frequently focus on organizing public meetings and discussions to deconstruct the origins of oppression, the transfer of community organizing has stressed the power of numbers, groundwork and direct action in achieving social change. More broadly, it recalls the democratic value of conflict. Such principles were at the heart of the labor movement, whose decline has significantly weakened social struggles in poor French neighborhoods in recent decades. Given the difficulties of organizing residents of the French banlieues in the face of resistance and repression by elected officials and institutions (Talpin 2016b), there is no doubt that conflict-centered organizing will continue exerting a significant influence on French social movements in the years to come.

Already, reliance on the American organizing tradition has strengthened the formation of a radical anti-racist milieu and made the theme of racial discrimination more prominent in the French public sphere. Indeed, many activists see behind community organizing the struggles of the Black Power movement as well as the first steps of Barack Obama’s career. America from this perspective remains an important resource for French ethnic minorities’ struggles. The Black Lives Matter movement has recently received much attention in French activist circles. It remains to be seen whether the Movement for Black Lives, also generously supported by American foundations, will receive the same criticisms from the French radical left.

Julien Talpin, « The Americanization of French social movements? Community organizing and its discontents in the banlieues », Metropolitics, 29 June 2017. URL : https://metropolitics.org/The-Americanization-of-French.html

[4] One of the most frequent questions raised when I presented my book (Talpin 2016a) in progressive activist circles was, for instance, whether community organizing fostered “communitarianism”—one of the most derogatory terms in the French public sphere—i.e. racial sectarianism, separation and identity politics. People were often surprised when I answered that the organizations I studied in Los Angeles were all interracial. 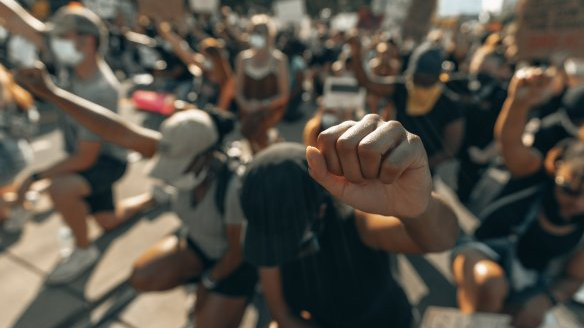 Political Organizing Beyond the Election: An Interview with Rosa Saavedra in North...