If you spend time in all but the most affluent corners of the vast Parisian banlieue (suburbs), you will notice the cranes, construction sites, and billboards that mark one of the most ambitious metropolitan restructuring projects in Europe: the Grand Paris. A massive nationally led urban redevelopment plan for Greater Paris launched by former president Nicolas Sarkozy in 2007, the Grand Paris initiative encompasses the Grand Paris Express, which is expanding the public transportation network between Paris and its suburbs; housing renovation and development; new office and commercial construction; and a new regional governance structure (Gilli and Offner 2009).

As France becomes an international symbol of social and racial division, it is impossible to separate the avalanche of investment from the long history of intervention in stigmatized urban areas often branded as “ghettos”. Stigmatization of the banlieue impacts not only Greater Paris, but also the peripheries of many French cities. [1]

In today’s media-dominated age, computer-aided images render the “new” banlieue with fake people occupying the imagined development. Billboards display architects’, developers’, or public officials’ vision of the future. It is strikingly obvious that the people featured in the “new” banlieue look nothing like the people living there. In the competition for narratives about racialized space, the stigma is often accompanied by whitewashing, or erasure.

Imagined and real residents of the northwestern suburb of Argenteuil

Scholars and critics have been paying attention to architectural renderings for some time, first as part of the marketing strategy of developers to sell places, now as part of the increasing digitization of urban space (Rose et al. 2014; Kaika 2011). These renderings cause controversy when they show communities being erased (Pfeiffer 2006). The occasional absurdity of these renderings has drawn a snarky following on the blogosphere and with creative graffiti artists.

The most serious issue, however, is who is represented. Diana Budds has criticized the “sneaky classism” of architectural renderings, especially in increasingly polarized global cities like San Francisco and London.

But in Greater Paris, there does not seem to be anything sneaky about it, and the issue is not just about class, but about the subject that—supposedly—is taboo in “la Republique”: race. [2] I began documenting renderings in the Parisian banlieue in 2011, and between 2012 and 2014 I took 421 photos of 64 different renderings found across a broad cross section of the Île-de-France region. [3] Some came from hyper-diverse parts of Seine-Saint-Denis, where immigrants are the majority, and others from more mixed or more homogeneously white places. They included official ANRU [4]-funded projects renovating or replacing affordable housing (habitations à loyer modéré, or HLM) of various types, private housing developments (often public–private partnerships), small-scale street work and large transit projects.

Each individual figure was coded according to various characteristics that indicated perceived demographic characteristics. [5] Of the 960 different figures identified:

In Bordeaux, the story is similar, though the redevelopment machine is focused as much on the former peripheries of the city proper as its banlieue. I live in Bacalan, a once- and still-marginalized former industrial neighborhood on the northern edge of the city where thousands of new units are being built. While many of my new neighbors actually do look like they walked out of the posters, the new development has brought a significant black presence to what has traditionally been primarily a Spanish, North African, working-class white French and Roma neighborhood. This new diversity is not reflected in the renderings, which consistently paint a picture that is whiter and more stereotypically bourgeois than the actual neighborhoods. 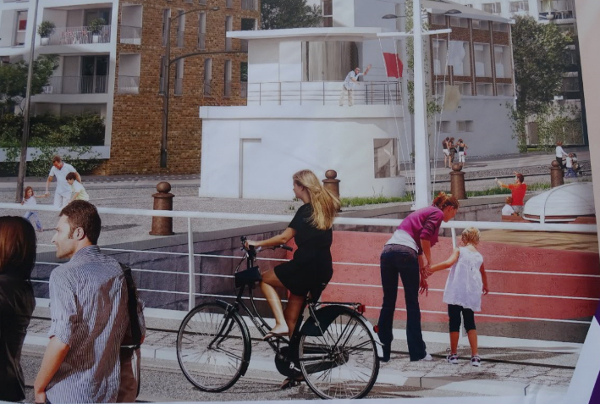 With all the political and academic attention given to questions of representation, integration, and participation in the banlieue and in urban space, why is such a diverse array of imaginations so whitewashed? To understand better, I invited three colleagues with expertise relevant to this question to interpret my findings: Yohann Le Moigne, [6] a French scholar of race relations in California, Theresa Enright, a Canadian scholar and author of The Making of Grand Paris, and Giorgia Aiello, an Italian scholar of visual communication and an expert on stock photography.

Yohann Le Moigne: The French nation was partly built around a color-blind universalist ideal (De Rudder et al. 2000). As a consequence, race is considered unimportant by many and white people are often not really aware of their whiteness or of the privileges that they get from it (Laurent and Leclère 2013). In this context, whiteness, which is nothing but a particularism of the dominant group, is transformed into a universal characteristic, so that it is not considered problematic to represent only white people in such renderings. Those who either complain about it or just notice it are considered, at best, “communitarianists,” and at worst, racialists or reverse racists, “antiwhite racists.”

Second, the banlieue is racialized in France (Wacquant 2008; Fassin 2012; Fassin and Fassin 2006; Lapeyronnie and Courtois 2008). While in reality it is both a socially and demographically heterogeneous space, there are deeply rooted negative representations about these territories and their inhabitants. Most people think about “Arabs and Blacks,” and this type of representation also has social repercussions (Laurent and Leclère 2013): a neighborhood mostly made up of white people will be more attractive to a majority of French people than a neighborhood mostly made up of minorities, who are unconsciously associated with poverty, crime and a whole set of “social pathologies,” as well as with the rejection of the national community (“they don’t want to integrate”) in a sort of French materialization of the clash of civilizations prophesied by Samuel Huntington.

There is also the question of the specificity of the Parisian banlieue and its role as a major site of state- and private capital-led redevelopment.

As in Haussmann’s Second Empire reforms or the post-World War II overhauls of suburban space, there is a clear colonial logic to contemporary projects whereby territories and populations around Paris are being reordered within a racialized political economy of dispossession and exploitation. Not only do these whitewashed and elite visions reflect hegemonic ideals about the “good” city and the “good” citizen, but insofar as they actively revalorize and reconstitute spaces and subjects, they also create novel discriminatory trajectories. In the aestheticized regime of the utopian global city, there is no space for the existing diversity of the banlieue.

From a critical urbanism perspective, we know development doesn’t happen in a vacuum. Not only do policy ideas travel, but so do the most mundane architectural practices.

Giorgia Aiello: In addition to being rooted in the racialized politics of the French banlieues and the aspirational logics of contemporary urbanism, this imagery is also part of a much broader visual economy. The 2D and 3D people populating architectural renderings, or “render ghosts,” are pre-produced images that are sold online. From billboards to websites, our everyday ambient image environment is overwhelmingly made of stock images that originate from global image banks. Render ghosts are made to look as generic as possible and therefore to represent malleable “types” of people that can be used across different contexts and for different purposes. They are increasingly sold through subscriptions and as bundles, thus further losing in specificity and uniqueness. And stock imagery is often crafted by freelance photographers, who tend to live and work in large and expensive Western metropolises like London and New York. These photographers, who are largely male and white, will actively use their personal networks (e.g. family, friends, and local models) to produce professional imagery as cheaply as possible. Ultimately, and for reasons that are both cultural and economic, commercial visual genericity still equates whiteness with affluence and popular consumer lifestyles. In this version and vision of a desirable world, cosmopolitanism can only be but a cosmetic veneer of diversity.

The irony is that the racial fantasy being promoted in both Paris’s banlieue and redeveloped Bordeaux will not be the future of either place. But the erasure continues, and in many ways, it is a corollary to the supposed “color-blindness” mentioned by Yohann Le Moigne. French urban sociologist Marie-Hélène Bacqué, like other scholars in France, has argued that the French state needs to lift the prohibition on gathering data on race and ethnicity, lest it continue to approach suburban problems without “basic facts.” An even simpler step in this direction is to begin rendering the new France in the full diversity that is both its present and future. Architectural firms, developers, and government officials must stop whitewashing the imagined future, so that French society can come to terms with what the contemporary French metropolis actually looks like.

[1] See, for example, Kirkness 2014. There is a rich literature in French and English on the stigmatization of the banlieue and its residents, including work like Kirkness’s about the banlieues of smaller cities.

[2] French law prohibits government agencies from gathering data on race or ethnicity as part of a supposed “race-blind” universalism; see below.

[3] They were taken as part of a wide ranging field project encompassing more than 100 municipalities, including approximately 90% of the département of Seine-Saint-Denis, 60% of Hauts-de-Seine, 30% of Val-de-Marne, and a portion of the grande couronne (the départements that form the outer circle of the Île-de-France region).

[5] While we recognize that this is an inexact science, and it is very uncomfortable to be coding someone based on skin color and appearance, the grossness of the figures belie any concern about margin of error.

[6] Yohann Le Moigne and I have recently collaborated (along with Greg Smithsimon) on a piece for Herodote (URL: www.herodote.org/spip.php?article746) on rethinking race in France and in Seine-Saint-Denis, where a lot of the original pictures of renderings were taken.