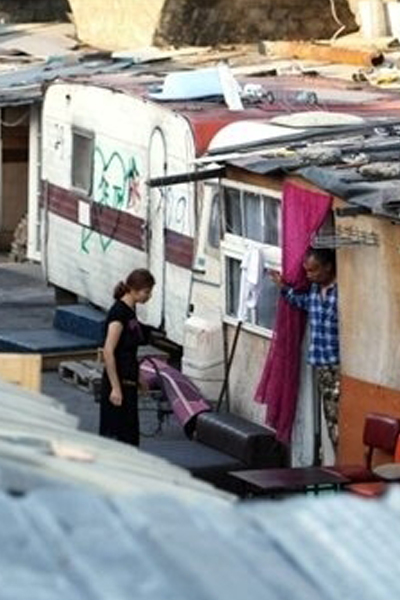 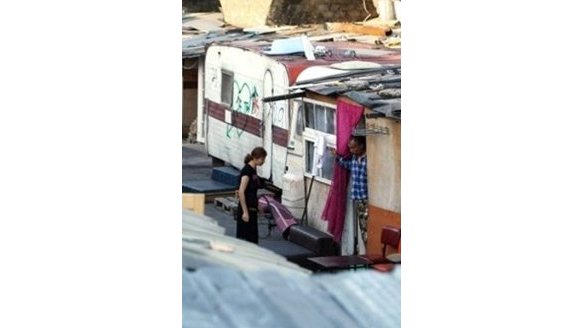 “Roma Villages” or the Reinvention of Cités de Transit

Olivier Legros & translated by Christina Mitrakos - 3 January 2011
Lire en français
In France, many Bulgarian and Romanian Roma migrants are being deported back to their home country. Certain selected families, however, are being re-housed in “integration villages,” that according to the author, are oddly reminiscent of the cités de transit built for immigrants in the 1960’s. Is the State repeating the history of failing to integrate foreign workers?

The “Roma question” is being debated daily in the media, mostly initiated by top government officials, who are seeking legitimacy or trying to win back votes, making it timely to examine the policies implemented by the authorities regarding shantytowns and other “illegal camps.”

In March 2007, local authorities, along with residents and some representatives from non-profit organizations, inaugurated a “Roma integration village” in an industrial zone in Aubervilliers. Since then, other “villages” have appeared in neighboring communities in Saint-Denis, Bagnolet, Saint-Ouen and Montreuil. These “villages”, set up by local state officials and municipalities, are destined for the Bulgarian or Romanian Roma, living in large shantytowns, that have developed over previous years in vacant lands, mostly in the industrial wastelands of the former red belt (communist) suburbs of Paris. Made up of modular units, the “villages” house individuals for a period of 3 to 5 years maximum. About 20 families are selected and are supposed to learn the rules of the host society before gaining access to regular housing. Are the authorities today trying to reinvent the cités de transit (temporary settlements for immigrants) in order to control the impoverished migrant Roma, living just outside the capital? Built almost a half-century earlier, with the aim of eradicating Portuguese or North African shantytowns, the cités de transit, were thought of as a transitional space between the shantytown and regular housing until the inhabitants were integrated into urban society.

At first glance, the “villages,” presented by institutional actors as being experimental, seem to be different from the cités de transit. Actually, their implementation seems to respond to two specific problems: 1) the evacuation of large shantytowns that prevent urban development and that slow down the renovation of industrial zones just outside of Paris; 2) the tempering of local opinion which vacillates between rejection and compassion. Furthermore, the “villages” policy is geared to a population that is usually not taken into consideration for government action. The Romanian and Bulgarian Roma are indeed a poorly known population by social workers and their organizations. Also they are staying in France without legal status, even though they are European citizens, who have freedom of movement within the territory of member states [1]. Finally, the institutions in charge of the “villages” are part of the “new spirit of public action” (Blondiaux et Sintomer 2002). First, they follow the principles of the 1990’s policy, “the battle against exclusion”: the enrolment of the non-profit sector, an individual centered social welfare, new financing tools such as temporary housing aid and money for local teams of social workers. Second, the public authorities apply new administrative and management schemes such as evaluation, sub-contracting, and the setting up of steering committees involving local authorities, NGO’s and State services. Thus, the “villages” are indeed a product of our times.

The Similarities between “villages” and cités de transit

The “villages” also present undeniable similarities with older experiments, in particular with those of the cités de transit: the gathering of targeted populations in separate sites, enforcement of specific rules (visiting is not allowed except with the authorization of the site manager); the pairing of the provision of shelter with social work, with not only the objective of economic and social integration but also of internalizing the social norms of the dominant society and consequently, changing the way of life of the Roma. Like the cités de transit, the “villages” are thus places of housing and isolation. They constitute the instruments of power that allow for the control of targeted populations and their behavior. In other words, these are tools of control and assimilation.

The origins of both policies also have points in common. At first, the cités de transit were scattered experiments. It wasn’t until several years later that a consistent policy was formed, whose goal, at the end of the 1960’s, was to put an end to the “shantytown scandal” (Tricard 1997; Noiriel 2006). Today, the “villages” seem to be following the same path. Makeshift housing first initiated by local actors, the “villages” are now used as the model in the Paris region and in other cities. Also, similar to the 1960’s, today elected officials of the red belt suburbs and non-profit organizations are pressuring the government to act with regards to migrants in a precarious situation, using the experience of the “villages” as an example. Like the cités, forty years earlier, the “villages” thus seem to be becoming the solution for government intervention in the shantytowns.

This slow renewal of state policies reveals the difficulties that official actors (public administrations and contracted non-for-profit organizations) face when they have to act beyond the well-trodden path of welfare and controlled assimilation. The process of the classification of migrants needs to be examined in order to understand this situation. In fact, the Romanian and Bulgarian Roma are similar to the Portuguese and North African workers of the mid 20th century. They are treated like unwanted foreigners, or even criminals who need to be controlled and managed. Three strategies are being applied in the shantytowns, all framed in terms of security:

1. The sorting of populations. When shantytowns are evacuated, some families are selected as capable of being integrated with regard to certain criteria (such as the size of the family, criminal records, school enrolment of children, fluency in French and professional skills). The majority of the shantytown inhabitants are not re-housed. They are instead offered assistance to return to their home country, officially for humanitarian reasons. This assistance comes in 2 forms: 1) the organization and cost of the return flight at the expense of the state and 2) each adult is given 300 € and each child, 100 €.

2. The selected families are confined to the “villages”, closed structures, under surveillance, where visits are forbidden except when authorized by the site manager. Consequently, the “village” follows the example of numerous other camps, a disciplinary space, even if the residents are free to leave the place, if they wish.

3. The driving away of the unwanted, translates into the increase in the number of “illegal camps” evacuated (to use official terminology) and the increase in the number of people repatriated. Initiated by local actors, this policy of de-stabilization of the Roma migrants, who are in a precarious situation, has today become a national campaign orchestrated by the Ministry of the Interior.

The institutions, thus, seem more concerned about maintaining order than about welcoming or integrating the migrants in a precarious situation. Like the cités of yesterday, the “villages” of today are before anything instruments of regulation, seeking to re-establish the authority of public officials on their respective territories, to control poorly defined populations, and sometimes, to free up land for urban development. However, it is important to emphasize the fact that these policies are not viable. Special treatment and assimilation under supervision accentuate the process of marginalization, as the experiment of the cités de transit has shown (Petonnet 1985). The humanitarian assistance to return home does not take into account the difficulties encountered by the Romanian or Bulgarian Roma in their home country, which leads many to come back to France. It is safe to say that the impoverished Romanian and Bulgarian Roma are now part of the urban landscape, in France and in other western European countries. The focus on questions of police and security in the new public policy regarding shantytowns will likely yield, like the cités de transit forty years earlier, new and lasting forms of urban marginality. The public authorities are probably in the midst of creating an important social problem that we will have to face in the coming years.

[1] You have to be a student, have health insurance and sufficient financial resources, or have a job. For Romanian and Bulgarian nationals, access to employment depends on having a residency permit. Long and costly, this procedure was imposed by the European Union as part of the transitory measures for the new member states. France is among the countries, which still apply these measures that are largely contested by the non-profit world assisting Roma migrants and more and more by local elected officials.