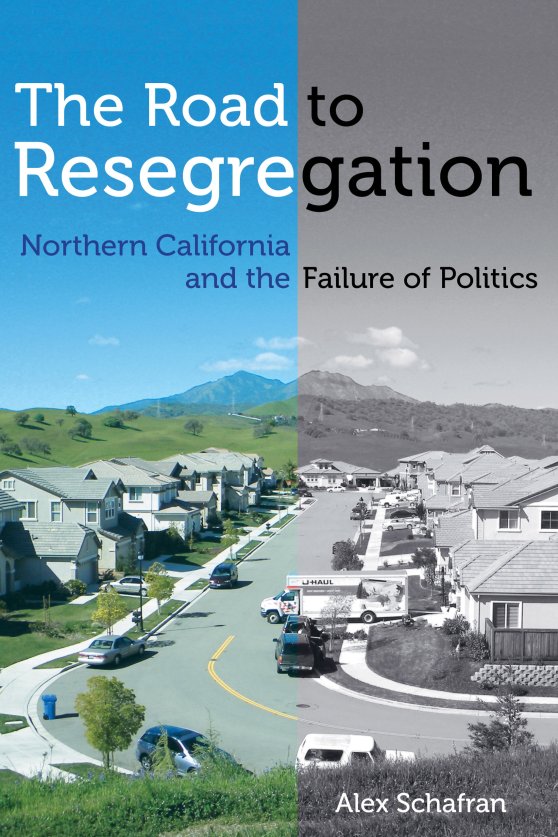 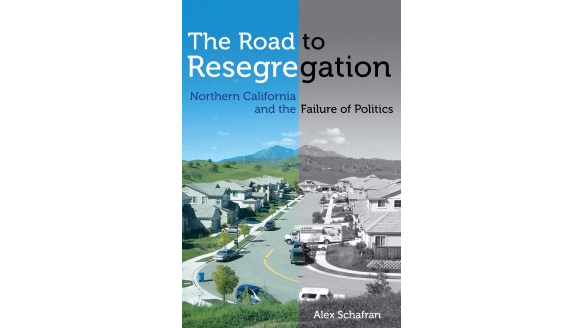 Reinventing Segregation in Northern California: An Interview with Alex Schafran

Over half a century since the Civil Rights Era, cities and urban regions in the United States remain divided and rife with inequality. Alex Schafran’s new book, Road to Resegregation: Northern California and the Failure of Politics, takes a new look at what segregation means in 21st-century US cities and regions through an in-depth analysis of Northern California’s political fragmentation and regional planning. This book urges its readers to recognize financial crisis, economic precarity, and housing unaffordability as a part of a broad and structural process of resegregation. This new form of segregation, characterized by regional geographies of precarity and coerced mobility, expels the poor and racially-marginalized from city centers, while maintaining their insecure access to resources.

Resegregation in Northern California first became visible with widespread foreclosures that ravaged entire blocks and communities in cities like Oakland and Antioch beginning in 2007. Northern California is simultaneously home to wealth and inequality, and the region continues to make the news with San Francisco’s record-high rents. Road to Resegregation calls our attention to previous failures in city- and region-building and points toward solutions, which Schafran argues can only be addressed through coalition politics concerning our “common purpose” (p. 254).

Darian Razdar: Your book outlines a novel understanding of unequal geographies in US urban regions, which you call “resegregation.” What distinguishes the re-segregation of today from the segregation faced in mid-20th-century US cities?

Alex Schafran: My notion of resegregation, which builds on the work of other writers like Jeff Chang, is probably better thought of as a new form of segregation. The new geography of race and class in places like Northern California—people of color increasingly living in far away suburbs and exurbs with long commutes, shaky fiscal conditions, overstretched finances, rising poverty, high housing and commuting costs—is clearly different from postwar ghettoized segregation. But since we are still talking about racialized inequality spread across a metropolitan region, we must still call this new inequality segregation. Calling it resegregation implies a step backwards, which I think is politically important, and certainly better than segregation 2.0.

DR: The Road to Resegregation builds from fieldwork you conducted in California’s Bay Area. Why did you choose to study this region to understand resegregation?

AS: The simple answer is that it is where I am from, and it’s the place I know best. I knew that in order to really understand what was happening, I needed a depth of knowledge it would be hard to replicate in a place I wasn’t deeply familiar with. Sadly, it is also a major epicentre of resegregation, as it was for the foreclosure crisis. There is the added wrinkle that the Bay Area is supposed to be different. It is the wealthiest and supposedly most progressive region in the country. Somehow I had a sense that this was part of the story—and it was.

DR: The stories you tell from the Bay Area come from cities and towns like Antioch, Modesto, and Patterson—places often out-shadowed by their neighbors to the west: San Francisco, Oakland, Berkeley, and San Jose. Could you elaborate on your decision to center the periphery in your methodology? How did this choice impact the research process and your findings?

AS: The project originally started out as an investigation into gentrification in Oakland, but almost as soon as I began poking around, people started asking me where folks had moved to once they left. Even though I was born and raised in the Bay, and I knew the names of these places, I had never been. By the time I made my first trip to Antioch, the foreclosure crisis had hit, and I knew that I had found my story. The challenge then became the opposite—how to tell the story of places like Antioch, Modesto and Patterson without making it all about them, as clearly these places are not entirely responsible for the challenges they face. So while I do my best to tell their stories, and they are arguably the heart of the book, I’m not sure they are the center. I worked hard to write a truly regional book about Northern California, as virtually every corner of this massive place played a role in resegregation.

DR: In what ways is this region a paradigmatic example of resegregation of US regions—is it special? To what extent does resegregation in the Bay Area reflect what’s happening across the country?

AS: Northern California is an extreme example of a generalized phenomenon, one made worse by vast wealth and a complicated geography. It has a lot in common with other big and wealthy regions like New York and Los Angeles, but some form of resegregation is happening everywhere. I’d say there are two sets of differences between regions. One is geographic: in some places, it is older, inner ring suburbs that have become the key sites of rising racialized poverty and inequality, while in others it is exurbs far away from central cities. The other major difference is the extent to which this new form of segregation is dominant, vis-à-vis older forms of postwar segregation which still very much exist. It’s critical to keep two things in mind about resegregation. First, it does not imply desegregation happened. Many places went from one form of segregation to the other. The second, and more important, is that the new form of segregation doesn’t replace the old one. They exist together, and actually drive each other. People leave or get pushed out of older segregated neighborhoods and end up in far away zones with characteristics of resegregation.

DR: You explain that today’s segregation is rooted in our failure to address the structural, racist issues around urban property tenure, regional mobility, gainful employment, and regional form. What does your research say about the current capacity to address “the failure of politics” in the US’s urban regions?

AS: That is a tough question, especially given how much worse the political climate has gotten between the time when I finished research and the book was published. The key argument in this regard that I make in the book is that we need to change the focus of our politics. Housing, transportation, infrastructures, schools and water and sewage systems—this is what I call our “common purpose,” the stuff we must discuss and debate collectively, as we built these systems collectively. We must make this the heart of our politics, not just at the local level. I dream of a presidential campaign decided by who focuses most intently on housing and transport policy. We are starting to see some research which suggests that on these issues, partisanship ebbs a bit. The only hope I have for a better political future for the US is one where our debates focus on these systems. The hard part is that in order to get there, we have to build more trust in the political economy of development. To me, that starts with recognizing our past failures, and especially just how racist these systems have been for generations.

DR: What is to be done before the next economic crisis to ensure we are ready to resist efforts to further re-segregate our cities and regions?

AS: Well, I’d argue we are already in a state of long-term economic and ecological crisis, and I think it’s best that we just accept where we are and work towards a better future. I think it is particularly critical that we also see resegregation as a future that is already here (like climate change), not one to be avoided. Too often we do politics based on an imagined past or future, instead of just admitting where we are. My book is like a confessional for Northern California, what I hope is an accurate and honest portrayal of where we are at and how we got there. Accepting and admitting this is the first step.