Animal-rights activists oppose animal exploitation in all its forms. Since the mid‑1980s, animal-rights activism has centered on farmed animals and promoting veganism, or strict vegetarianism that avoids all animal products and by‑products. This focus reflects the fact that farmed animals comprise fully 99% of all animals killed by humans each year (HSUS 2015). Since the 1960s, farmed animal production has greatly increased: milk production has doubled, meat production has tripled, and egg production has quadrupled (Delgado 2003; Pew Commission on Farm Animal Production 2009). How best to promote vegetarianism and veganism, though, is a long-standing debate. The “Veggie Pride” parades in Paris and in New York City are one method among many, but they highlight these two countries’ different approaches to animal activism.

Parades exemplify a key element of urban spectacles. Both New York City and Paris host major parades for events such as the Chinese New Year and Carnival. New York features more ethnic pride parades than does Paris, such as for West Indian Day, Puerto Rican Day, and of course St. Patrick’s Day. But both cities are also known for their major gay pride parades. Explicitly drawing on the gay pride example, French animal-rights activists organized the first ever Veggie Pride parade in Paris in 2000. This event asked vegetarians and vegans to come out and proclaim their “veggie pride.” On their website, the organizers explain:

“With lesbian and gay pride, homosexuals were able to ‘come out of the closet,’ to proclaim in public that they were not ashamed of their sexuality, and to denounce homophobia. Many vegetarians and vegans wish to do the same with regard to the vegephobia of which they are victims, when they express their desire to not harm animals. The use of the term ‘pride’ to defend the rights of vegetarians and vegans allows us to establish a parallel between these two protests and their often very similar militant concepts” (Veggie Pride 2016).

In their written reflections on the event, the Veggie Pride organizers explore this comparison in detail, exploring the nuances of making comparisons between vegetarian and gay pride. Sociologists have also studied how media promote this “vegephobia” in newspapers (Cole and Morgan 2011) and have taken up the question of how animal-rights activists attempt to make parallels with other liberation movements (Cherry 2010; Kim 2011). The comparison has not garnered much critique from the gay community, but the different French and US versions of Veggie Pride have engendered some intra-movement critiques.

Although both the Paris and NYC Veggie Pride parades are part of a larger, international animal-rights movement, these two parades cannot be understood in isolation. We must examine how activists and organizations function alongside other organizations within their broader social-movement field. The culture of this broader field creates institutional logics, which structure activists’ strategic and tactical decision-making. Organizational theorists Patricia Thornton, William Ocasio, and Michael Lounsbury (2012, p. 2) define institutional logics as “frames of reference that condition actors’ choices for sense-making, the vocabulary they use to motivate action, and their sense of self and identity.” Applying this concept to social-movement organizations’ tactical choices, I view institutional logics as movement-wide guidelines for creating, choosing, implementing, and evaluating strategic action.

Institutional logics can vary between countries in the same movement field because of broader cultural beliefs and national cultural differences. Historic national repertoires in the United States include pragmatism, populism, and anti-intellectualism (Lamont 1992), which are evident in the US movement’s focus on pragmatic action over philosophically informed action. Historic French themes include aristocratic, socialist, and anarchist traditions (Lamont 1992), which can be seen in the favoring of intellectualism and a consistency between thought and action. We see these differences in the broader US and French animal-rights movements, and in how they manifest in different Veggie Pride parades.

The French movement developed an institutional logic of consistency, meaning that activists chose strategies and tactics that maintained a coherence of thought and action, or a uniformity of movement messaging and long-term goals, even if activists thought those methods might not be efficient or effective. This logic of consistency drove activists to maintain a congruity between organizational ideology and tactics, and a coherence of individual activists’ actions with the ideology of their organization. Thus for the French organizers, their Veggie Pride parade explicitly focused on animal rights and the killing of animals for meat, as their strategies and tactics aligned with their long-term goal of animal liberation.

While conducting fieldwork for my book Culture and Activism: Animal Rights in France and the United States (Cherry 2016), I attended the Parisian Veggie Pride multiple times. Now in its 16th year, the Veggie Pride parade attracts about 1,000 participants. At the first Veggie Pride Paris that I attended in 2005, I watched about 300 people gather at the Fontaine des Innocents in the neighborhood of Les Halles. Marchers held signs or dressed in costume, though they stood out from the street performers at the nearby Centre Georges Pompidou. One group dressed as cave people and held signs that read, “Eating meat is a prehistoric custom.” Other signs read, “A vegetarian life is great!” and “Your butcher is a murderer.”

As the group passed various restaurants, including KFC and McDonald’s, as well as a traditional French restaurant called Au Pied de Cochon (“The Pig’s Foot”), several protesters stopped to yell “KFC! Murderer!” or boo in the direction of the restaurants. During the march, protesters chanted slogans that focused on the use of animals for food, such as, “Vegetarians, vegans, no death in our mouths, no blood on our hands!” or “We can live without killing!” 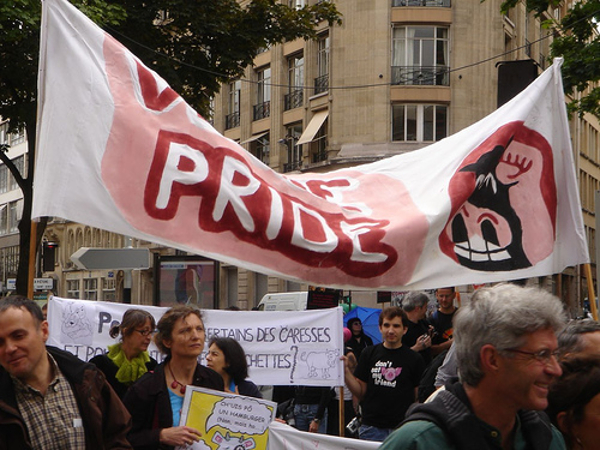 In addition to publicizing their protest through signs and chants, participants attempted to engage the public through informational tracts and flyers. The primary flyer asked: “Are you vegetarian for the animals? Then come to the fifth Veggie Pride. With this protest, we wish to affirm our existence, denounce vegephobia, defend our rights [as vegetarians], and fight for those similar to us who do not have rights.” One participant, who was interviewed for a short video on the march, said “We demand the right to eat vegetarian food in public cafeterias, and the right to not be seen as odd when we say we are vegetarian.” In a country where gastronomy reigns supreme and the forced-feeding production of foie gras is legally protected as “cultural tradition,” it is no surprise that vegetarians in France feel ostracized.

At the second Veggie Pride parade that I attended in 2007, I attended the post-event organizers’ discussion, where organizers said they wanted to make this an international event. It sounded like the French organizers were excited to bring the Veggie Pride campaign to new countries and new locations beyond Paris.

The US movement developed an institutional logic of pragmatism, meaning that activists chose what they viewed to be the most efficient and effective ways to achieve short-term goals. This pragmatic logic guided activists to decide courses of action based on consideration of the resources available to them. They used using market research to evaluate the effectiveness of past potential future actions. With this logic, US activists used environmental and health arguments to broaden their movement frame and gain more new vegetarians, even while they continued to debate whether those arguments would keep people vegetarian in the long term.

The press release for the first-ever Veggie Pride in the United States stated: “Participants may be animal-rights activists, environmentalists, or simply concerned with their health. But on May 18, 2008 all will come together with one voice, one expression, of veggie pride.” The French organizers were not upset that their tactic had diffused to another country. In fact, they had been explicitly trying to make this and other campaigns more international. And they were not upset at not being mentioned, as the press release ended with an explicit statement about the French influence: “The parade is fashioned after and will take place the same weekend as the Veggie Pride parade in Paris. The Parisian parade was the first of its kind ever to take place in the world and has been going on annually since 2001.”

But the French organizers responded to my telling them about the US parade by saying, “It’s an unfortunate disfigurement of the Parisian Veggie Pride, since it is not centered on the animal question nor on the denunciation of killing animals.” Another wrote: “It’s really a shame. It would be great if the organizers could at least take some of the statements from the French site, which are much more political.” Their critique was that the US parade pragmatically allowed for health and environmental arguments, which were explicitly disavowed in the French parade. French activists only promoted the philosophically coherent argument of denouncing animal death and suffering. French activists were happy that their tactic had diffused to the US, but they wanted their political orientation to cross over as well. 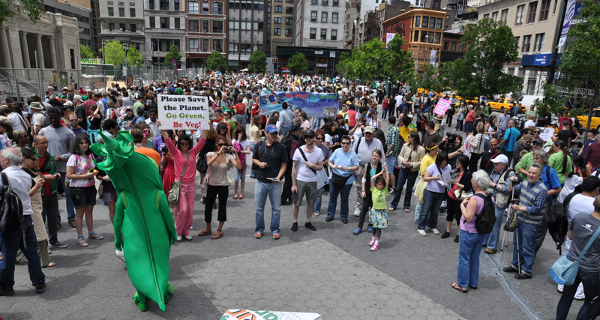 I attended the second annual Veggie Pride in New York to observe how it unfolded. Several hundred protesters gathered in the Old Meat District of Greenwich Village, walked through several neighborhoods in Manhattan, and ended at Washington Square Park for a festival. Their signs read, “Think you can be a meat-eating environmentalist? Think again!”, and “Prevent cruelty and disease—go vegan!” Several participants dressed as peas and carrots, lending a festive atmosphere. But it was not all cute vegetables. One group had fashioned a “meat-eater’s colon” out of gauzy material, complete with polyps and a colostomy bag, due to, as the sign put it, “butt cancer.” At the end of the parade, several well-known animal-rights activists from major organizations such as the Humane Society of the United States, and United Poultry Concerns, addressed the crowd. Many other organizations had set up tables and were giving away free food samples.

Now in its tenth year, the Veggie Pride parade in New York continues to grow, and it now includes costume contests and the opportunity for passersby to be paid one dollar to watch a pro-vegetarian video. But from the perspective of French activists, the US parade dilutes the animal-rights message by including health and environmental arguments. These different parades, and the French reaction to the US parade, illustrates how broader cultural beliefs vary between countries and translate into differing modes of action.