To understand New York’s ability to keep tech funding coming, it is important to examine this assumption, especially the volume and geographical concentration of venture capital on different scales. Nationally, the amount of venture capital invested in US companies exploded from $30 billion in 2008 to $115 billion in 2018 (PwC/CB Insights MoneyTree™ Report 2019). This boom ushered in a wave of scholarship on the urban and spatial aspects of the venture capital economy, from geographic inequality and concentration of investments (Florida 2018; Florida and King 2016) to the effects of within-city segregation on the impact of investments (Samila and Sorenson 2017). Yet virtually no recent research has focused on whether VCs still make most of their investments locally. Surprisingly, our study of a decade of investments made by top New York City-based VCs shows that they increasingly invest outside the city.

A preference for proximity?

I use the term VCs to refer to the firms that raise venture capital—money from pension funds, corporations, individuals, and other investors—and channel that capital into early-stage, high-risk, private companies in exchange for equity, with the expectation of returning profit to their investors once they “exit” the company, usually when the company is acquired by a larger corporation or becomes publicly traded (Gompers and Lerner 2001). [1] VCs animate venture capital, not only by directing the flow of billions of dollars every year through their selection of investments but also by shaping the development of their portfolio companies through the business guidance they often bring to their investments. VCs concentrate their investments in the early, mid-, and late stages (pre-IPO or acquisition) of a company’s life, specifically for high-tech companies that may present more risk than other forms of financing can take on (Gompers and Lerner 2001, p. 155).

Spatial proximity could be vital to overcoming the risk and monitoring costs of the venture capital investment model. Indeed, a number of studies published in the early 2000s found local investments to be most common, but also presented findings that suggest VCs may increasingly seek investments outside their own city in the future, including lower-cost investments (Griffith, Yam and Subramaniam 2007), success from unique investments (Chen, Gompers, Kovner and Lerner 2010), and network positions that enable VCs in distant cities to partner with one another (Sorenson and Stuart 2001). More recently, the media platform Tech Crunch found a slow but steady decline of the rate of in‑city venture capital investment nationally from over 50% in 2012 to just over 40% in 2017 (Rowley 2017). The study also found regional variation, with “Western state investors” much more likely to invest within-region than their Northeastern, Midwestern, and Southern state counterparts.

The importance of proximity in determining investment locations for the most recent era of the venture capital market is a critical gap in our understanding of the role of venture capital investments in local urban economic development. To address this, Sharon Zukin and I designed an exploratory study of New York City–based VC activity from 2008 to 2017. Using the online database Crunchbase, we sampled the top 15 VCs headquartered in New York City as of February 2018. We then collected the investment activity of each VC, including the name of the company receiving the investment and the date of investment, from January 1, 2008 to December 31, 2017. At the time of our research, this data was publicly available on Crunchbase’s website. We then used a private dataset provided to us by Crunchbase (Crunchbase Data n.d.) to determine the headquarters city of each of the companies that received an investment from our VCs.

This gave us a total of 3,686 investments made to 1,899 companies in 335 cities internationally. Our data source did not include information on the success of particular investments, such as whether the investment was abandoned or for how much it was valued if the company went public or was acquired. We chose to work with the count of investments rather than the amount of money invested, in order to simplify the dynamics of progressive investment stages.

Our findings suggest that there may be a pattern to the changing geography of investments over time (see Figure 1). From 2008 to 2009, VCs split their investments nearly evenly between New York City, California, and the rest of the country; these were also the two least active years for our VCs, with about 100 deals made (see Figure 2). As the number of deals picks up from 2010 to 2013, the percentage of deals made locally had a rocky but mostly positive trajectory. Although we never found a year when VCs invested locally more than half of the time, the city maintained a distinct advantage in receiving VC funds from 2008 to 2014. In the early years of New York City’s venture-backed economy, the city’s VCs exhibited a local pattern of investment that suggests their roles as both progenitors and beneficiaries of the sector’s growth.

Figure 1. Distribution of investments, by location 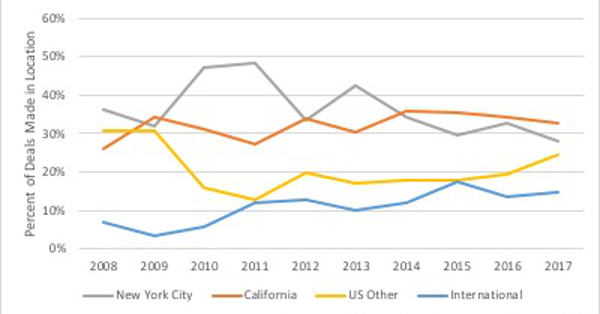 Figure 2. Growth of investments, by location 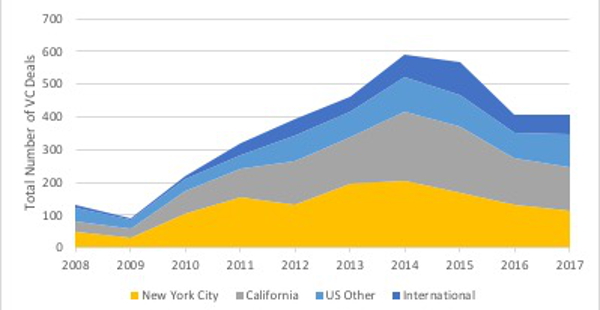 The picture becomes muddier in the later years of our data. Most notably, New York City loses its advantage over California, and the city receives a smaller share of investments in 2015, 2016, and 2017 than at any other point (see Figure 1). Over the same years, other US and international locations experience modest gains in their share of investments. Although the total number of investments drops by almost 200 deals in those three years as well, the VCs are still considerably more active in their later years than they were before 2012 (see Figure 2). What’s more, New York City VC success does not seem dependent on investments in local companies. In 2017, the most active VCs had local investment rates ranging between 10% and 44%. The VCs with the highest rates of local investments overall were in the middle of the pack in terms of investment activity; only one VC fell in the top 25% of our sample in terms of the local rate of investment and total investments. Looking at all investments made by our VCs from 2008 to 2017 reveals the same pattern: 75% of VCs invested locally less than half of the time.

In the past decade, the top New York City–based VCs have decreased their rate of investment in local companies, leading to a more geographically diverse investment portfolio. Over the same time period, however, the city experienced a boom in the overall amount of venture capital invested. Florida (2018) found that over 60% of the national growth of investment amounts from 2006 to 2016 was accounted for by investments made in New York and San Francisco (20% and 40% respectively). New York City isn’t just receiving money either—the “exit value” (the valuation of a company at the time of an initial public offering or when it is acquired by a larger company) of local companies has steadily increased, more than doubling from $4.3 billion in 2013 to $9.4 billion in 2018 (Haverstock 2019). These two concurrent trends suggest that the current venture capital market is defined by investments across cities more than investments within cities.

The concentration of venture capital investments in a handful of cities is documented in detail. However, the processes of accumulation are less understood. Our study rebuts the assumption that VCs will most often invest locally because of the advantages of proximity to making and monitoring investments. A larger study of national data should test the reasons for expansion suggested by earlier research and for the possibility of regional variation in investment cultures. Though proximity between VCs and portfolio companies appears to have declined in significance, there is little to suggest that the geographic inequality of investments will even out. Instead, investors are still deeply embedded in a spatially concentrated global market. Having a better sense of investors’ relationships to their cities is one entry point into understanding the nature of urban economic development and spatial inequality in the new economy.

[1] VCs in this sense are distinct from angel investors (usually individuals who invest their own capital into the first round of a company’s financing) and corporate venture capital (usually large corporations who invest directly into a small company, with the expectation of not only profit but also strategic access to technology) (Lamain and Zimmerman 2011).