Killing Them Softly: The Environmental Vulnerability of Black Women in Albany, New York

A chain-link fence is all that separates the Ezra Prentice Homes from rows of “bomb trains” parked at the South End of Albany, New York. These ominous black tank cars carry crude oil by rail across the country to be stored in tanks and eventually transported along the Hudson River. The trains have been given their deadly nickname because of their potential to explode. Leaks, derailments, and explosions pose serious threats to the environment and surrounding communities. Many of the toxins released from bulk storage tanks (BSTs) include volatile organic compounds (VOCs), which evaporate into the air and soil. Exposure to these contaminants poses a significant public health risk as some of them have been classified as carcinogenic, teratogenic (liable to cause developmental malformations), and/or implicated in the etiology of other systemic symptoms (Wilson et al. 2013; Hilpert et al. 2015). While setback distance requirements [1] for petroleum storage vary across the nation, many people live, work and play dangerously close to tank cars and facilities that store these volatile chemicals.

The Ezra Prentice Homes (EPH), a public housing project in Albany, New York, is one such community. EPH is adjacent to the Kenwood rail yard, which houses bomb trains in Albany’s South End neighborhood. The South End is a predominantly low-income African-American community. Residents in the middle of this heavy-industrial zone are already exposed to a combination of pollution emanating from trains, marine vessels, cargo handling equipment, oil and gas storage, as well as a parade of cars and diesel trucks travelling along Interstate 787 every day. As a result of long-term exposure to such poor air quality, many suffer from a variety of ailments including severe headaches, difficulty breathing, nosebleeds, chronic bronchitis, asthma, depression, and anxiety (Plaske 2014).

Though residents and policymakers continue to frame the issue in terms of environmental racism and environmental classism, little is known about other intersecting forms of vulnerability, like gender. I combined sociological and geographical methods of analysis and used spatial statistics to test the significance of the relationship between the percentage of Black female-headed households and proximity to BSTs. In Albany, I found that Black women bear a disproportionate environmental burden as the primary householders in communities concentrated around toxic hazards. 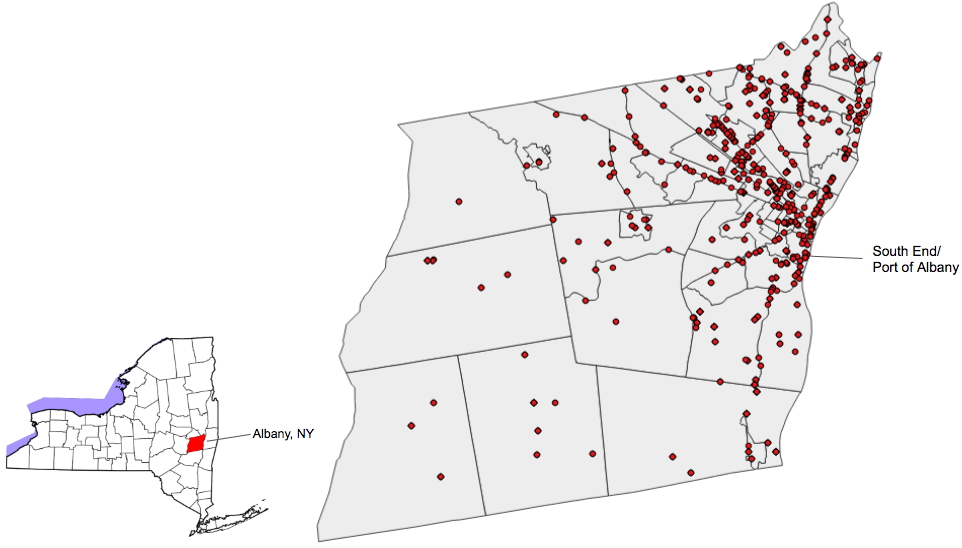 Decades of environmental-justice scholarship have established clear patterns of racial and socioeconomic disparities in the distribution of a number of environmental hazards (Mohai et al. 2009). While some scholars have noted gendered aspects of environmental justice (Buckingham and Kulcer 2009), few have measured these patterns spatially. Rather than trying to reify gender over race and/or class, this research provides a more nuanced understanding of the intersectionality of environmental inequality.

Intersectionality is an analytical concept developed by critical race theorist and Black feminist Kimberlé Crenshaw (1991) that examines how multiple forms of social stratification (e.g. race and gender) intersect and overlap to create complex forms of oppression. Researchers have applied intersectionality to spatial studies of environmental justice, focusing on race/ethnicity, class, and immigration status (Crowder and Downey 2010; Sicotte 2014; Liévanos 2015; McKane et al. 2018). Existing literature on the distribution of environmental hazards does not parse out the relative exposure of males and females. This study is the first to explore the dynamics of gender and race as intersections of environmental vulnerability.

I am particularly interested in the environmental vulnerabilities of Black women, which are the result of a complex interplay of economic restructuring, social stratification and family formation. Sociologist William Julius Wilson’s seminal work on inner-city America (1987, 1996) describes how the period of deindustrialization ushered in a new form of urban poverty marked by concentrated unemployment and shows its devastating effects on Black neighborhoods, families, and individuals. Wilson associates the increase in female-headed Black families with the decreasing economic opportunities and employment rates of young Black men, initiated by the changing economy. As a result, Black women have assumed the principal role as primary householder. An increase in service jobs marginalized Black men but improved the economic status of Black women, who had previously been restricted primarily to private domestic work. “If Black women have ‘gained’ earnings from changes in opportunity afforded by services-industry growth, they have lost by having to support as sole earners” (Woody 1989, p. 66). Black women’s relative economic advantage over Black men may be counteracted by environmental burdening.

To identify the universe of BSTs, I used the dataset Bulk Storage Facilities in New York State collected by the New York State Department of Environmental Conservation (DEC) and available via the NY Open Data website. I omitted all inactive and closed facilities, as well as facilities without verifiable addresses and corresponding census tracts in Albany. Once BST locations were established, I generated half-mile circular buffers around their locations. I selected this distance because it is within the range of previous proximity assessment studies that use distance-based methods (Chakraborty and Armstrong 1997; Pastor et al. 2001), and is similar to the recorded blast radius of the Lac-Mégantic disaster (Johnson 2013). Like previous studies using the distance-based areal-apportionment method (Mohai and Saha 2007), the areas beyond the half-mile circular neighborhoods were treated as constants in one-sample t‑tests (see Table 1).

Table 1. Buffer zones within a half-mile of BSTs, constructed from census tracts in Albany, 2010

Understanding the dynamics of environmental inequality is essential for crafting effective policy that reflects the lived realities of individuals and communities. Currently, both the Environmental Protection Agency and DEC define environmental justice in terms of race and class only, with no mention of gender or intersectionality. True environmental justice ensures the equal protection of all individuals. Incorporating gender discrimination and the vulnerability of women into both policy and research is an important first step toward real equality.

[1] Setback requirements dictate that dangerous structures such as bulk storage facilities must be set back a specific distance from adjacent residential areas and properties. These rules are designed to protect the general population from potential harm and nuisances from these operation sites. Regulation varies by locality as setback requirements are not regulated by the federal government. Instead, states and local governments administer their own policies to regulate BSTs. In the US, setback requirements for BSTs can range from 3 ft (0.9 m) to 500 ft (150 m), depending on the occupancy, the class of product, and the size of the tank (Blair et al. 2017; MI‑LARA‑BFS 2015). The New York State Department of Environmental Conservation (DEC) does not have currently have setback requirements for bulk storage facilities in Albany County.

[2] Table 1 shows that differences between the host and nonhost communities, defined by the half-mile buffer, are statistically significant at the 0.001 level for all demographic characteristics, except the percentage without a high-school diploma, supporting previous quantitative environmental studies that find race and class differences between host and nonhost communities.