Institutional Roadblocks to Achieving Environmental Justice Through Public Participation: The Case of CSO Control in US Cities

Predominantly poor communities and communities of color remain disproportionately impacted by environmental hazards. The US Environmental Protection Agency (EPA) is now focused on combating this inequality by increasing “meaningful public participation” in these “overburdened and vulnerable communities” (US EPA, 2016, p. 27). The EPA’s emphasis on public participation reflects a larger trend in environmental governance: officials increasingly view public participation as a normative good, as a right of citizens, and as a method of increasing government legitimacy and public support for new policy agendas (Rydin and Pennington 2010). Conversely, failure to fully include the impacted public in environmental policy creation is now often seen as an obstacle for new policy initiatives, particularly if one of the stated goals is increased environmental equity. For instance, in their review of New York City’s 2015 OneNYC plan, Bautista, Hernandez, Osorio, and Soto (2017) note that despite the plan’s inclusion of equity as a guiding principle for urban sustainability and resiliency, the plan’s top-down approach and failure to “include grassroots voices at the table will perpetuate patterns of inequity.” However, the question remains… how do you attract grassroots voices to the table?

This essay examines the design and language of open-source materials from cities’ public participation plans attached to long-term sewage control initiatives, a context in which city authorities have had limited success in encouraging meaningful or “deep” participation (Farrington and Bebbington 1993) by disenfranchised communities. [1] It argues that these limitations are ingrained in the public participation process via EPA recommendations that encourage city agencies to focus on modifying public behavior rather than building a more democratic infrastructure for environmental governance (US EPA 2010, 2015). In particular, the government’s categorization of community members as either “innovators” (those who can encourage others to adopt green, eco-friendly practices) or “laggards” (those who are less likely to do so) (US EPA 2010) as expressed through these outreach campaigns works to reify race- and class-based inequalities in public participation, keeping the disenfranchised away from the table.

In the wake of growing public concern over water pollution, the EPA passed the Clean Water Act in 1972. The law requires environmental agencies to monitor and publicly report pollutants in the water. In 1994, the EPA attempted to increase transparency in watershed regulation by instructing local agencies to develop public participation plans that “actively involve the affected public” in deciding on “long-term controls” for combined sewage overflow (CSO) (US EPA 1995, pp. 1–8).

Combined sewage systems, in which rainwater and sewage travel through the same single-pipe network to wastewater treatment facilities, are commonly found in older American cities in the Northeast and Upper Midwest. They represent an environmental and health hazard to residents because, during heavy rains, these systems become overwhelmed and release overflow (which contains sewage in addition to stormwater) into local waterways. Those living near outfall (or overflow) sites are particularly affected (ibid.; WHO 1999). [2] In New York City and Philadelphia, neighborhoods within a half-mile (0.8 km) of combined sewer overflow sites tend to have unusually high percentages of poor and non-white residents (see Figures 1 and 2). This correlation represents a classic example of environmental injustice: poor communities and communities of color are disproportionately vulnerable to environmental risk and hazard as compared to wealthier and whiter communities. Therefore, based on the EPA’s own regulations, the residents of these communities should be the focus of public participation efforts surrounding CSO control. 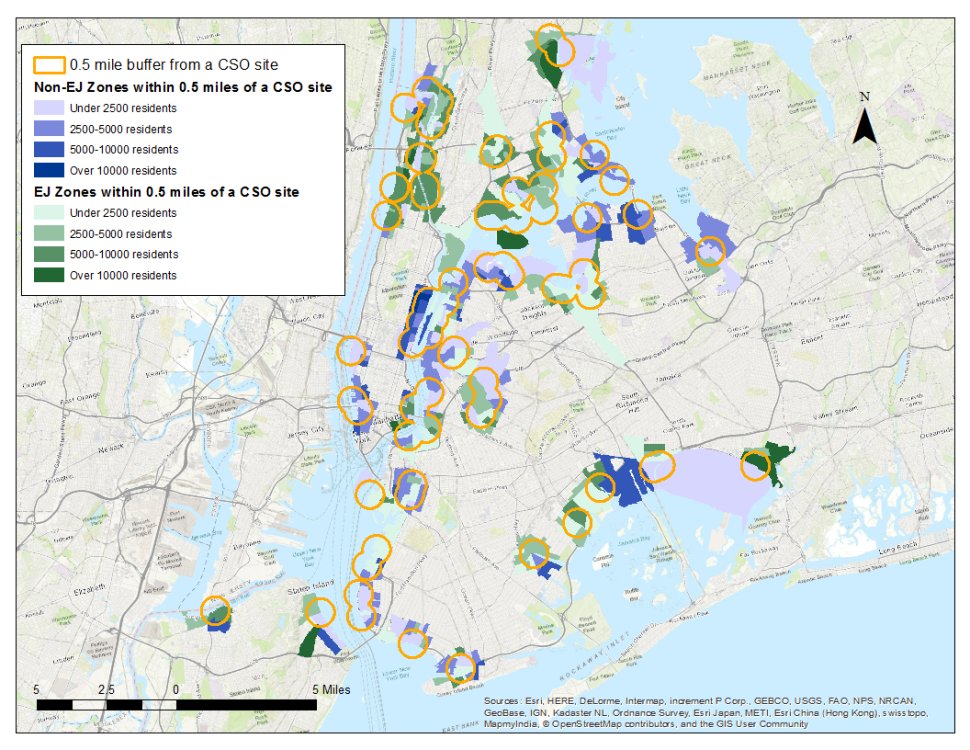 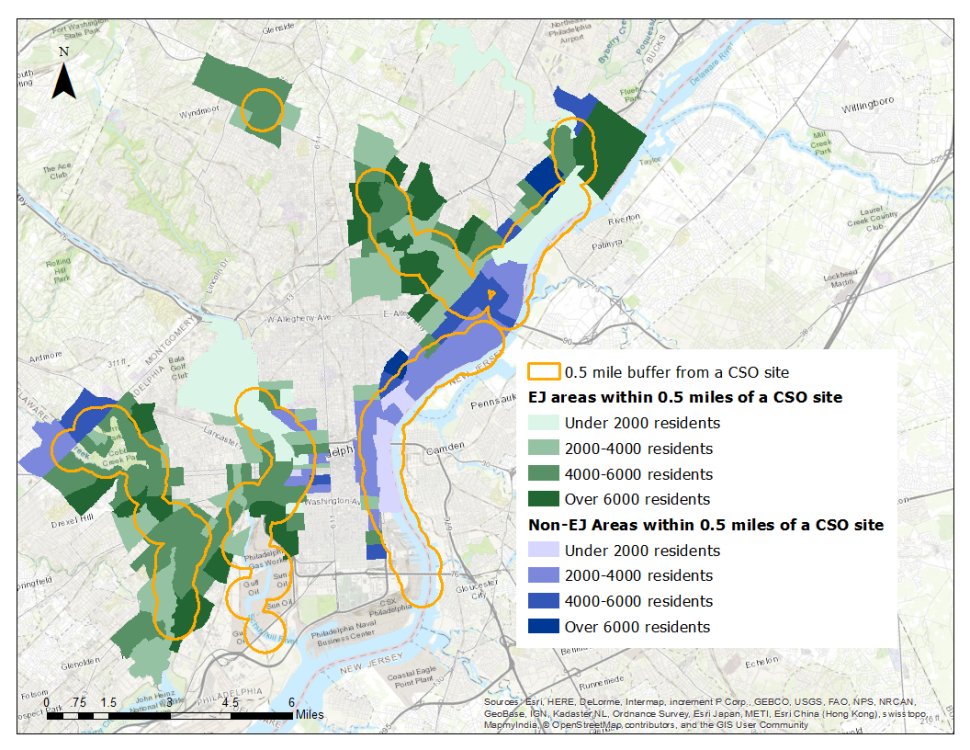 However, although they constitute the majority of residents living in areas “actively impacted” by CSOs, poor and non-white populations are often systematically excluded from meaningful participation; this is due in part to the EPA’s embrace of social diffusion theory. Social diffusion theory frames the goal of public participation as less of a democratic right and more of a top-down method of widespread public behavior modification in order to achieve “cost-effective” public health or environmental goals (see Rogers 2010). The theory divides community stakeholders into five categories based on their likelihood of adopting behavior modifications. On one end of the spectrum are “innovators,” who are seen as community leaders who will be the first to adopt the desired behaviors and will lead others in doing so. On the other end of the spectrum are “laggards,” those who are less likely to change their behaviors initially without widespread buy-in (see Figure 3).

Figure 3. The five categories of social diffusion theory as presented by the EPA in their guide to watershed outreach campaigns 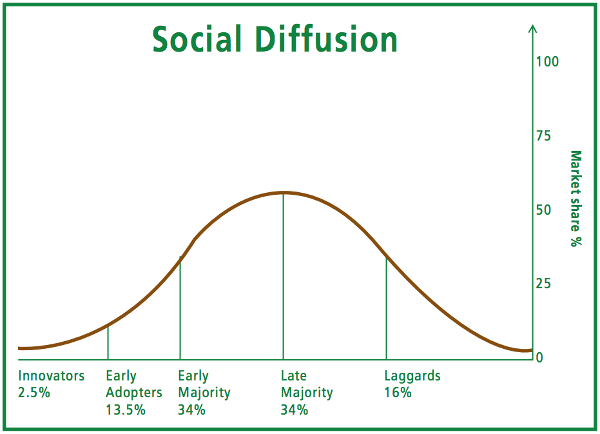 In its guide for conducting watershed outreach campaigns, the EPA (2010) explicitly notes that innovators tend to be residents with higher education levels and higher socioeconomic status. Its definition of laggards is slightly less pointed, but still implies that they are seen as the inverse of “innovators” (i.e. with lower education levels and socioeconomic status), as they are seen as the “the least likely to adopt a new behavior no matter how hard you try to educate and motivate them” (pp. 16–17). Because most of the population (or “market share”) falls into the “late majority” or “laggards” categories, the EPA argues that it is more worthwhile for agencies to focus on “low-hanging fruit” in outreach campaigns (i.e. innovators and early adopters) as they can act as “partners” in encouraging mass behavior modification (ibid., p. 18). 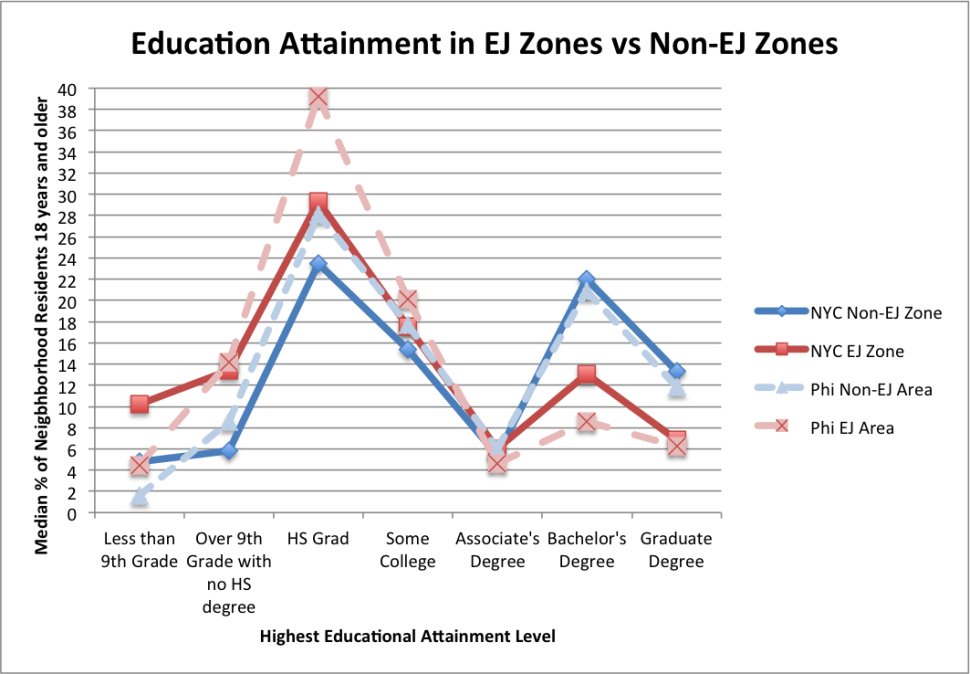 While it is hard to judge from publicly available documents relating to CSO management how much cities consciously incorporate the EPA’s understanding of social diffusion theory, it is clear that there is a stark difference in outreach materials intended to fulfill legal obligations to inform the public of policy developments and materials intended to actively change public behavior. [4] Both New York State and Pennsylvania have “open meeting” laws requiring that the public receive advance notice of when a public meeting will take place (see 7 NY PO Law §104 and 65 PA CSA §709). These notifications tend to be aesthetically dull and use terminology that would require some a priori knowledge about CSOs in order for the average citizen to feel motivated to attend (see Figures 5 and 6). 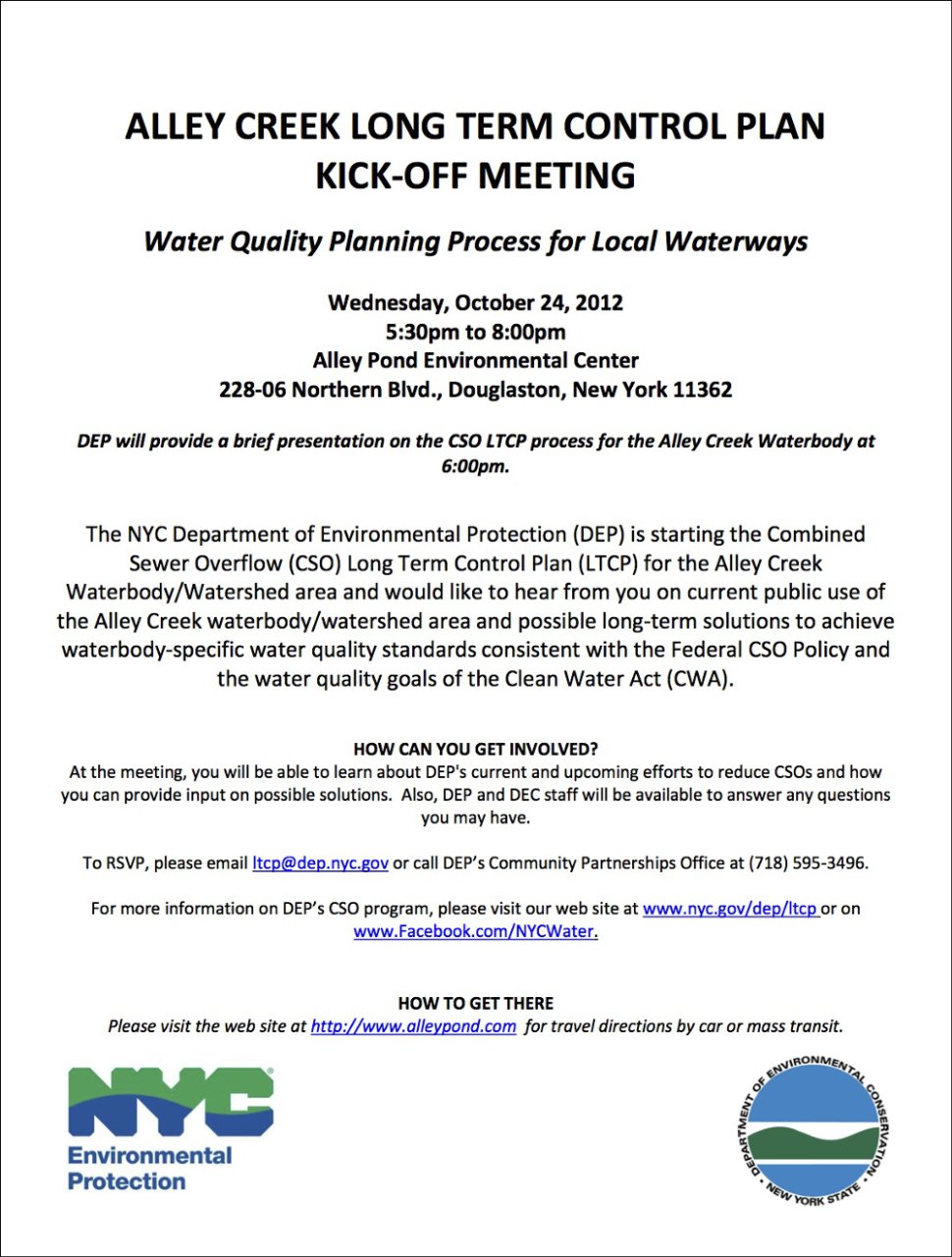 A document analysis of watershed public participation plans in Philadelphia and New York illustrates differences in outreach that align with the EPA’s social diffusion theory. This analysis suggests that participation outreach plans to date have failed to adequately frame lower-income residents as potential stakeholders in democratic governance. For instance, in its advertisement for a community outreach meeting in New York City, the New York Department of Environmental Protection (DEP) fails to define the term CSO and states that the goal of the meeting is to “achieve waterbody-specific water quality standards consistent with the federal CSO policy and the water quality goals of the Clean Water Act” without explaining what exactly those standards are and why they are significant for community members (Figure 5). 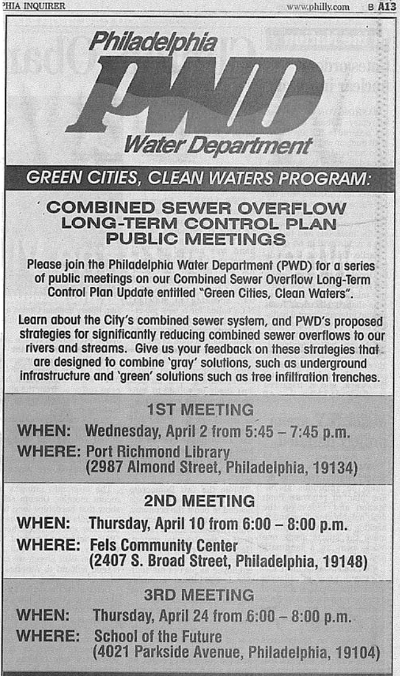 While Philadelphia’s advertisement for CSO long-term control plan meetings is written in slightly more accessible language (Figure 6), the description of the meeting is rather dull, particularly in comparison to outreach materials in both cities intended to promote community and individual behavior modification. For instance, New York City’s Wait… pilot program uses colorful imagery (including a cartoon seal) and easy to follow directions to encourage people to limit water use during heavy rain to reduce the amount of CSO output during these events (Figure 7). 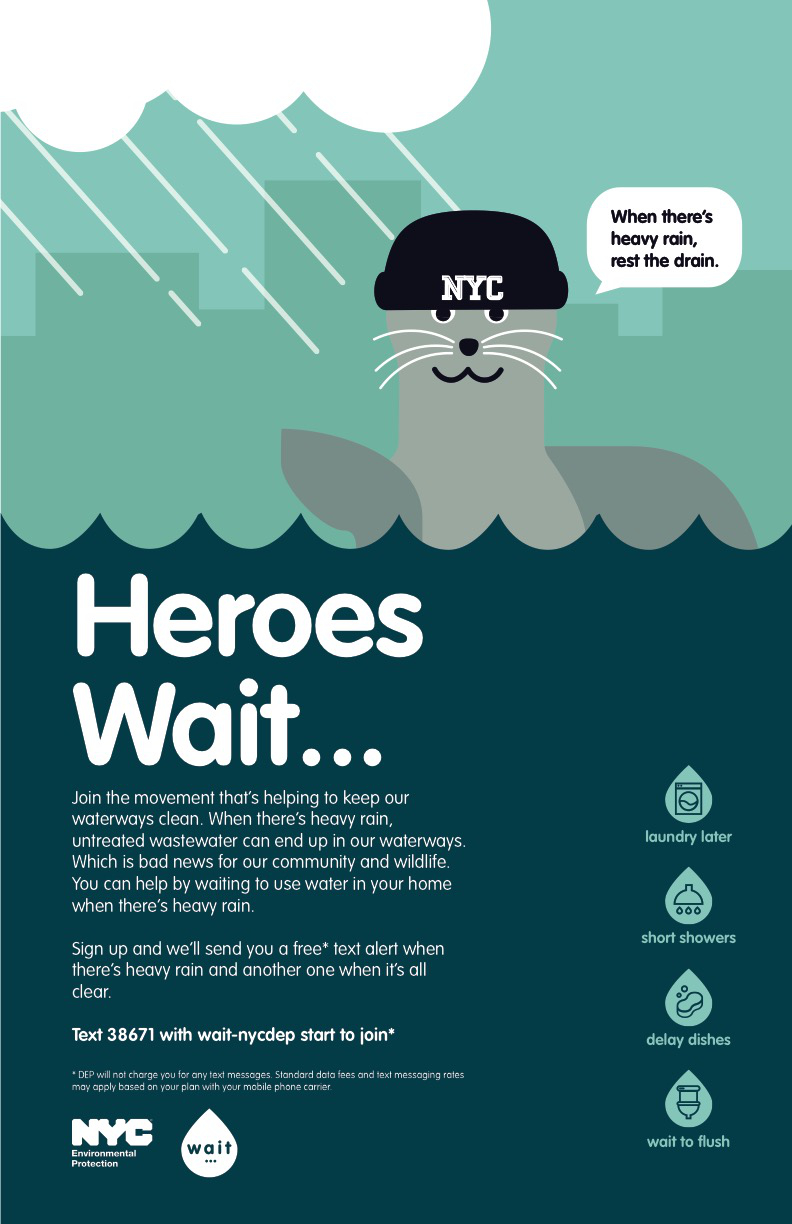 Similarly, in 2015, the Philadelphia Water Department held a “spokesdog” contest for its “scoop the poop” campaign to help prevent pet waste from going into the local rivers, with the winning owner receiving a $200 gift pack (Figure 8). 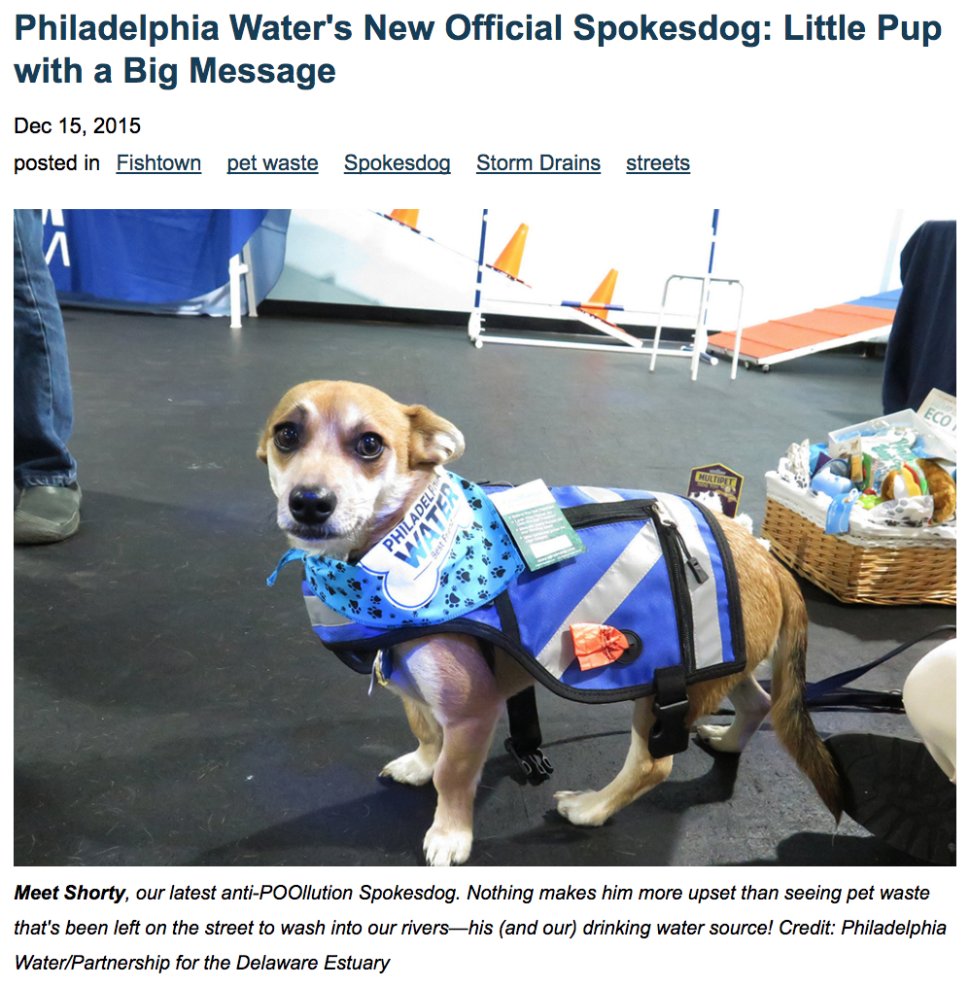 To truly encourage meaningful participation within disenfranchised communities requires a greater understanding of how race, poverty, and education levels intersect and can create barriers to public participation (Hunt and Zajicek 2008). Public education and outreach campaigns should not be based on classist and racially charged theories that erroneously read disenfranchised populations’ lack of participation in environmental governance as a lack of interest. Rather, as Butler and Adamowski (2015) contend, marginalized stakeholders could more meaningfully engage in water-resources management if the facilitation team reached out to marginalized populations at the earliest stages of the planning processes, allowed them to identify and propose solutions to structural barriers that would exclude their participation, and gave communities control over project implementation.

While New York City and Philadelphia are both well beyond the earliest stages of the planning process, they both have mechanisms in place to collect citizens’ feedback on their projects, such as public comment periods and surveys.. These mechanisms could go beyond mere data collection and provide potential blueprints for increasing meaningful public participation. For instance, as of New York City’s last citywide Long-Term Control Plan meeting in November 2017, the city reported that this feedback will be used to “improve presentations to make them more accessible to the public” and “update information materials” (NYC DEP 2017). This revision period provides a perfect opportunity to give community members and representatives a chance to design their own outreach material and to develop meeting protocols that ensure a greater response from disenfranchised populations. In considering environmental justice as the primary rather than secondary (and often conflicting) goal of public outreach, city environmental agencies may be able to create larger buy-in to their programs through the creation of more effective, meaningful and sustainable practices.

Special thanks to Professor Celina Su and her spring 2017 writing class for their support and feedback on multiple iterations of this piece.

[1] Farrington and Bebbington recognize participation as “deep” when residents hold some real decision-making power in governance.

[4] This article is part of a larger study that utilizes framing analysis to evaluate urban environmental government agencies’ public policy initiatives using solely open-source documents and outreach campaigns. Framing analysis is a form of discourse analysis that examines how “metaphors, exemplars, catchphrases, depictions, and visual images” are utilized to communicate a public policy, event, or “story” (Pan and Kosicki 1993, p. 56). As van Dijk (1988) argues, the “intended and comprehended” themes of a story (or in this case, a public document) do not always align, as discourse comprehension is an active process that differs among individuals and groups (ibid.). Therefore, while it is unclear from this analysis that the intent of the city agencies was to follow the EPA’s recommendations, it is clear through this research that the two case studies’ public outreach frames align with the EPA’s framing of social diffusion theory.

Lily Baum Pollans - 16 May 2022
Lily Pollans guest-edits this series for Metropolitics that focuses on the various ways in which waste is part of...

Laure Crepin & Fanny Bugeja-Bloch & translated by Oliver @Waine - 5 November 2021
Single-parent families are among those households most affected by economic precarity and the current health...