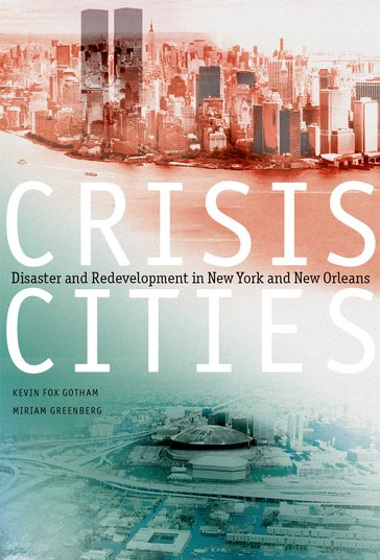 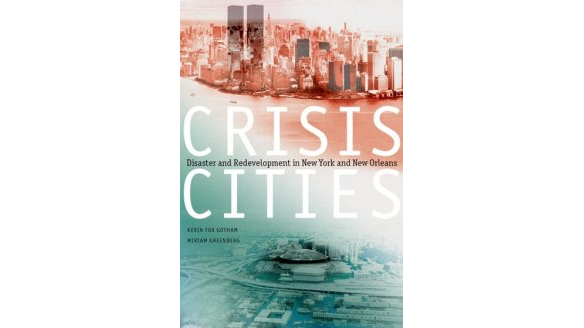 In the nearly 10 years since Hurricane Katrina struck the Gulf Coast and floodwaters inundated New Orleans, population has rebounded to near pre-Katrina levels. An influx of young, creative workers has helped reverse the decades-long brain drain, sparking a sense of optimism (Ehrenfeucht and Nelson 2013). The economy has diversified, no longer as dependent as before on tourism or on petroleum-related sectors. Yet talk of New Orleans’ comeback overlooks persistent crime and poverty, entrenched race and class inequalities, and an ongoing municipal struggle to provide basic services and maintain infrastructure. And while some neighborhoods have experienced resurgence—in some cases raising concerns of gentrification and displacement—others still face widespread blight and abandonment (Ehrenfeucht and Nelson 2012).

New Orleans’ rebound from Hurricane Katrina is often lumped together with Lower Manhattan’s revival since 9/11 as a testament to innate resilience and to the ability of shrewd government actors to harness market forces. Yet the transformation of Lower Manhattan and New Orleans also raises the questions, recovery and redevelopment for whom, and for what purpose? Kevin Fox Gotham and Miriam Greenberg challenge the widespread narrative of resilience and set out to address these questions in Crisis Cities: Disaster and Redevelopment in New York and New Orleans.

Crises, in the eyes of the authors, are not the inevitable outcome of disaster events such as terrorist attacks or hurricanes. Rather, the risk and widespread socio-spatial inequities inherent in uneven urbanization give rise to crises. The authors conceptualize crises as both historical breakdowns in social, economic and environmental systems and as “framed” or socially constructed events. As radical breaks or ruptures, crises present new opportunities for intervention “to advance and legitimize radical policy reforms and redevelopment projects that would be far more difficult to implement in normal times” (p. xi).The political leaders and other actors and organizations that win the struggle to control crisis framing designate recovery priorities and determine the recovery and redevelopment response pursued.

Despite differences between New York and New Orleans as places, differences in the catastrophes they suffered, and differences in the political framing at work after the two disasters, Gotham and Greenberg argue that both emerged as paradigmatic “crisis cities” in which elites used disaster to advance and legitimize a market-centered approach to recovery and redevelopment. Market-oriented policies, characterized by the privatization of disaster aid, devolution of redevelopment responsibility to the local state and the use of tax incentives and corporate aid to encourage redevelopment, ultimately led to “uneven redevelopment”—or the crisis-driven reproduction of risk that increases the vulnerability of urban populations to future disasters.

Gotham and Greenberg ground their theorizing in a rigorous, comparative historical analysis of pre- and post-9/11 and -Katrina redevelopment efforts in Lower Manhattan and New Orleans. The authors provide a pre-disaster trajectory of development in both cities to trace the historical roots of the contemporary crises and explain the framing of the disasters at the time they occurred. Gotham and Greenberg then present an unparalleled account of how local officials used disaster aid in the form of Community Development Block Grants (CDBGs) and private-activity bonds to pursue an uneven approach to post-disaster redevelopment. This detailed tracking of redevelopment resources and the policy mobility between the two events is a key contribution of the book.

While the Department of Housing and Urban Development’s (HUD’s) CDBG program had been used to support disaster recovery and redevelopment since the early 1990s, Congress altered the structure and operation of the program in response to the 9/11 attacks and lobbying by local officials. Congress substantially increased the aid channeled through the program and allowed states to establish independent authorities to distribute CDBG funds and oversee redevelopment, paving the way for the creation of the Lower Manhattan Redevelopment Corporation (LMRC) and the Louisiana Recovery Authority (LRA). Most significantly, HUD waived CDBG income targets, as well as public benefit and citizen participation requirements after 9/11. As a result of the waivers, post-disaster CDBG funding in New York largely bypassed the low- and moderate-income populations the program was intended to help, benefiting developers and major corporations instead.

The changes to the CDBG program after 9/11 set the precedent for the deregulation and liberalization of program rules after Hurricane Katrina. In Louisiana, HUD lowered the requirement that 70% of CDBG funds benefit low- and moderate-income residents to 50% and allowed the LRA to hire a private contractor to manage the state’s multi-billion-dollar, CDBG-funded housing recovery initiative, the Road Home program. The HUD-approved formula for the program, which was based on pre-Katrina housing values, had a discriminatory impact on African Americans. Because homes in African-American neighborhoods had a lower market value than comparable homes in white neighborhoods, homeowners in African-American neighborhoods received smaller rebuilding grants even if repair costs were the same.

In New York, the federal government loosened restrictions on private-activity bonds programs, [1] by waiving the public-benefit requirement and allowing, for the first time, their use for commercial development in disaster-impacted areas. Here again, recovery resources evaded small businesses. Instead, Liberty Bonds subsidized large real-estate projects and major financial institutions including Goldman Sachs and the Bank of America.

After the 2005 hurricanes, the Gulf Opportunity (GO) Zone Act authorized the use of GO Zone bonds, modeled after the Liberty Bond program, to rebuild the Gulf Coast. The bonds were designed to promote investment in hurricane-damaged areas, but in Louisiana bond allocations did not reach areas and businesses in most need. The most severely damaged areas in and around New Orleans received a relatively small amount of bond allocations while large oil and gas and manufacturing firms received a disproportionate share of bonds for projects unrelated to recovery.

In New York, the Federal Emergency Management Agency’s narrow definition of the “disaster area” included Battery Park City/Lower Manhattan and Tribeca but omitted most of Chinatown and all of the Lower East Side, barring many low-income residents and small businesses from receiving recovery assistance. Language barriers and other aid eligibility restrictions further blocked residents and businesses in the Lower East Side and Chinatown from recovery aid, hastening the decline of Chinatown’s garment industry and small businesses throughout Lower Manhattan. In the decade after 9/11, Chinatown’s population decreased significantly. During the same period the number of families in poverty declined in both neighborhoods as the white population increased, signaling the displacement of poor and non-white residents. Meanwhile, post-disaster investments in luxury housing and high-end retail in Battery Park City/Lower Manhattan and Tribeca, coupled with LMDC investments in schools, parks and community centers, helped attract upper-middle-class white residents and young families, accelerating the area’s transformation into a live/work district and tourist destination.

In New Orleans, the authors compare the recovery trajectories of Lakeview and the Lower Ninth Ward, two neighborhoods that experienced similar levels of flooding but which were vastly different in terms of socioeconomic status and demographic characteristics. Prior to Hurricane Katrina, Lakeview was overwhelmingly white and wealthy. By contrast, the Lower Ninth Ward was low-income and almost entirely African-American.

Given the discriminatory formula for the Road Home program, Lower Ninth Ward homeowners received smaller rebuilding grants than homeowners in Lakeview. Insufficient grant payouts, limited personal savings and inadequate or no flood insurance made it difficult for Lower Ninth Ward residents to return and rebuild. Those who came back had to fight for attention and resources. The uncertainty and confusion about the future of the neighborhood after decades of neglect by city officials convinced many Lower Ninth residents that government officials would not prioritize rebuilding in their community.

Unlike in the Lower Ninth Ward, recovery officials never questioned rebuilding Lakeview. The population recovery and commercial revitalization of the area have far outpaced that of the Lower Ninth Ward, given the personal resources of Lakeview residents and the disproportionate amount of federal aid Lakeview received. Nearly 10 years after Hurricane Katrina, the two neighborhoods stand in stark contrast: Lakeview’s resurgence continues while the Lower Ninth Ward has become a “landmark of catastrophe” with widespread disinvestment and abandonment (p. 175).

Gotham and Greenberg draw on Klein’s (2007) concept of disaster capitalism in their depiction of crisis-driven redevelopment in New York and New Orleans. Yet for the authors, neoliberal responses to crises are not inevitable. Post-crisis redevelopment is highly contested, and crises can present opportunity to “challenge the status quo in the way our cities are built, governed, inhabited, and imagined” (p. 3).

Both New York and New Orleans witnessed unprecedented civic engagement and organizing after 9/11 and Hurricane Katrina. In important instances, residents and activists were able to stop redevelopment proposals. In New York, grassroots coalitions blocked plans for a CDBG-funded $6 billion high-speed rail connection between Lower Manhattan and John F. Kennedy Airport that would have benefited primarily commuters and tourists. Meanwhile, in New Orleans, residents of heavily flooded neighborhoods pushed back against initial plans to restrict redevelopment and shrink the footprint of the city, and demanded an immediate return to their homes and neighborhoods.

Although grassroots activists and residents played a vital role in recovery in both cities, they were unable to realize broader demands for just and equitable development. Institutional decisions outside their control, including the design of recovery programs in the immediate aftermath of the disasters, made it difficult to influence the pace and pattern of recovery. But just as local elites learned from the two events to extend the reach of neoliberalism in urban recovery and redevelopment, so too can activists and residents draw on the cities’ painful experiences to create broader, more inclusive post-disaster visions. In the concluding chapter, Gotham and Greenberg highlight how broad-based coalitions in New York drew on the experience of uneven redevelopment after 9/11 and Hurricane Katrina to make more expansive social and political demands after Superstorm Sandy. The impact of these political coalitions remains to be seen. However, in exposing the common dynamics of redevelopment in New York and New Orleans, Gotham and Greenberg’s ambitious book makes essential and inspiring reading for urban activists.

[1] A bond issued by, or on behalf of, local or state government for the purpose of financing the project of a private user.