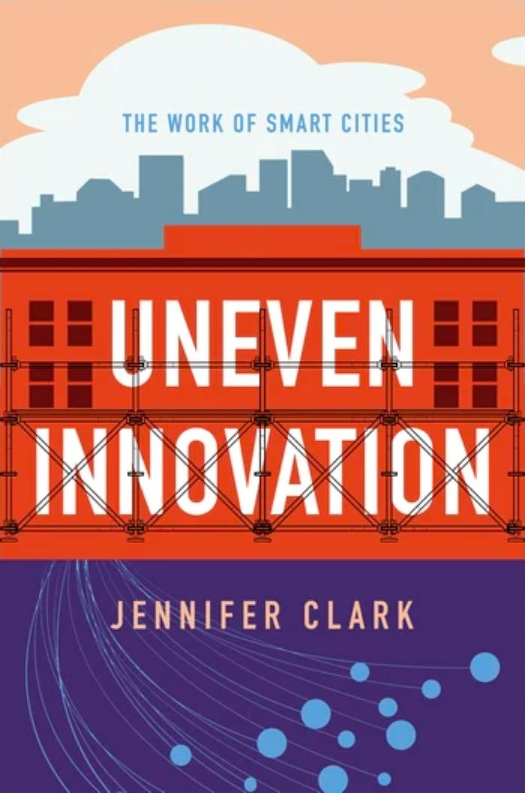 Have you ever wondered about the long-term effects of the small-scale technological innovations that have sprouted up in cities across the world? Dockless bikes, ICT-integrated parking systems, and even Wi‑Fi-enabled public trash cans are just three of the many examples that Jennifer Clark uses in Uneven Innovation to illustrate both the potential and the pitfalls of these smart-city projects. Her nuanced interpretation walks a fine line between presenting a harsh warning about the smart-cities project to date and providing us with a glimmer of hope about its long-term prospects.

On balance, Uneven Innovation is a critique of the smart-cities project, arguing that it is not simply a set of technological improvements but an urban-policy project shaped by the complex economic, political, and technical environment in which we find ourselves. The title of the book suggests that Clark, among many others, is worried about our ability to bring equity into the science, technology, and innovation policies that make up the smart-cities project. She warns us that if we fail to center the smart-cities dialogue on equity, we are merely inviting technology vendors to cultivate, if not exacerbate, uneven development within and across cities.

The discussion of power and agency is a major focus of Uneven Innovation. Clark argues that the smart-cities project discourse has been designed to minimize the ability of cities to say no to, or to negotiate with, technology companies. Smart-city vendors and agents—no doubt taking lessons from economic development and real-estate consultants—have tapped into city leaders’ fear of missing out or being left behind. Clark warns readers that unless city leaders have a proactive plan—or even better, a Mayor’s Office of New Urban Mechanics like the one in Boston—they often end up accepting solutions from vendors rather than pausing to identify problems and consider a range of alternatives. When they accept vendors’ pitches at face value, they end up focusing on technocratic solutions and discrete projects rather than seeking out holistic interventions that improve participation or broaden opportunity.

These technocratic solutions are generally not driven by altruism, nor are they without a cost to smart citizens. The interoperable services and products almost always require access to people, but also to data about their characteristics and behaviors. Clark cautions her readers that unanswered questions about data ownership and utilization remain central to the smart-cities conversation. Although she provides no formal remedy for decision-makers, her argument serves as a reminder to proceed with caution.

The one potential weakness of Uneven Innovation is that Clark switches so adeptly between the perspectives of economic geographer, urban planner, and urban technologist that the reader can be somewhat confused about her point of view. In that way, it is possible that some readers will feel less empowered to enact change because she does not always make clear whom the actor or decision-maker should be. That said, the interdisciplinary focus of this book can be celebrated, especially at a time when city leaders and researchers are increasingly encouraged to be policy entrepreneurs who seek efficiencies and innovations across silos.

Entrepreneurialism in the smart city

For those readers interested in the nuts and bolts of urban entrepreneurship around smart cities, Chapter 4 offers a detailed account of how the smart-cities project attempts to reshape cities and redefine work by promoting urban entrepreneurialism for both places and people. It highlights how the city acts as a test bed for technology vendors and how local actors use the smart-cities project to shape local branding efforts. A particularly pertinent aspect of Clark’s discussion of branding is how it exposes the degree to which the smart-city brand is virtually indistinguishable across cities. For most places, this has meant that “[t]he smart-cities specialization is not a local capacity but, rather, a permissiveness in the face of technological experimentation, coupled with the policy environment that is required to enable it” (p. 112). The net result is that most cities undertake expensive and time-intensive rebranding efforts around the smart-cities project without actually achieving any sort of competitive advantage. To make matters worse, the entrepreneurial focus of smart-cities rebranding often infers that the experimentation is being carried out by small and local firms, which is rarely the case. Instead, smart-cities entrepreneurialism generally looks more like extraction and exploitation by large technology vendors.

Despite this focus on these shortcomings in the smart-cities project, Clark believes that smart cities could actually expand civic engagement and lessen inequalities by streamlining the participatory planning process. To that end, Chapter 6 focuses on the potential for the smart-cities project to go beyond being an economic-development silver bullet. While the competitiveness argument still leads most cities to support the smart-cities project, Clark makes the case that technology can upgrade the civic infrastructure by increasing access and redistributing equity. However, given what we know about smart-cities investments to date, it is hard not to be skeptical. Clark herself ends the chapter by reminding us that uneven investments in urban innovation will have long-term repercussions for the relative resilience of regional economies.

Some of her best contributions come in Chapter 5, where Clark thoroughly assesses urban innovation networks around the smart-cities project. She gives an astute overview of these networks and then specifies how their incremental and episodic approach leads to uncertainty and increased interjurisdictional competition. Her description of the rise and fall of Rockefeller’s 100 Resilient Cities (100RC) program was particularly illuminating, especially in its discussion of how networks like 100RC increasingly act as substitutes for localized technical expertise. Given how pervasive these networks are and how essential they are for the smart-cities project, this section should be essential reading for city leaders.

In the end, the book’s greatest strength will be its sustained relevance. Though published in early 2020 and presumably finalized in late 2019, the book does not immediately need a Covid-era update. Its main tenets resonated before the pandemic and will continue to act as a warning for cities as they begin to re‑engage with the challenges of the smart-cities project in the post-Covid era.