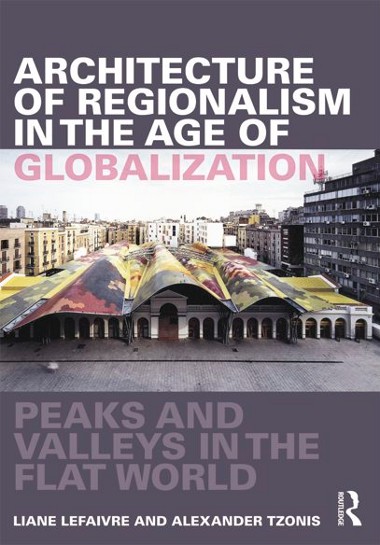 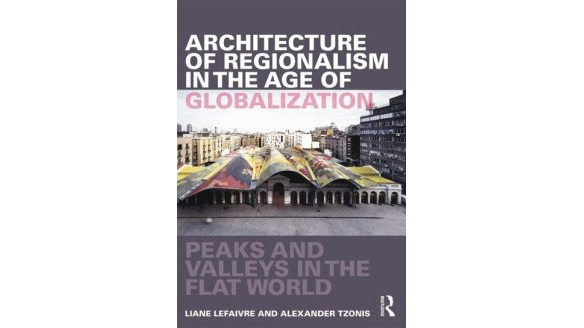 A Regionalist Panorama for Architecture and Beyond

Karla Britton - 30 January 2013
Lire en français
Can architecture preserve local identities in a globalizing world? In their new book, Liane Lefaivre and Alexander Tzonis present critical regionalism as a viable alternative to the standardization of contemporary architecture and landscapes. They trace the history of this movement and highlight the social and environmental challenges that it can help overcome.
Reviewed: Liane Lefaivre and Alexander Tzonis. 2012. Architecture of Regionalism in the Age of Globalization: Peaks and Valleys in the Flat World, London and New York: Routledge.
architecture / regionalism / globalization
Download PDF

How do we become modern and at the same time remain attached to cultural sources? How do we revive an old, dormant civilization and at the same take part in an emerging universal civilization? These are the seminal questions asked by Paul Ricœur in his essay “Universal Civilization and National Cultures”, first published in 1955 in Histoire et Vérité. They arose from what he understood as the problem created by certain “civilizing drives” of our modern era: namely, that humankind is on the brink of a single world civilization which represents both immense progress and an overwhelming challenge of adapting cultural heritage to a new universal condition. Although expressed more than a half-century ago, Ricœur’s concern – that a single world civilization creates an attrition of the cultural and ethical resources of peoples around the globe – remains prescient for current political, economic, social and environmental debates.

How to combat the “flattening of the world’s natural and cultural diversity” is, for example, the key question addressed by Liane Lefaivre and Alexander Tzonis in their recent book, Architecture of Regionalism in the Age of Globalization: Peaks and Valleys in the Flat World. As scholars of the built environment, Lefaivre and Tzonis address this issue by calling our attention to the expansive history of regionalism and the ways in which the genius loci has influenced architects and planners from the time of Augustus to our era. Reflecting more than three decades of research and writing on the theme of regionalism and architecture, the book engages regionalism not only as a concept, but also a worldview and architectural movement that stands in opposition to global forces. “Regionalism,” the authors write, “critically understood, presents a vital complementary alternative for the world to come.”

Lefaivre and Tzonis’ argument is that, throughout history, there has been a regionally based allegiance to the geography and identity of defined natural landscapes. While the concepts of region and regionalism shift over time – not unlike the amorphous words nation and nationalism – they nonetheless emerge as a “continuous process” when seen over long spans of time, standing in dynamic confrontation with the forces of globalization. Globalization has tended to “flatten” obstacles to the interaction between places, transforming a world of barriers and insular regions into a “flat world.” Regionalism, on the other hand, supports the “singularity, autonomy and distinct identity of regions, enhancing differences between them, nurturing diversity, and contributing to a world of ‘peaks and valleys.’” As the authors conclude, “Regionalism always opposes centralization and universalization, and instead supports decentralization and autonomy.”

Regionalist thought, of course, has had a long lineage of cultural and social influence beyond the discipline of architecture. The current work discusses, for example, Johann Heinrich von Thünen’s The Isolated State (1826), in which he imagined an ideal isolated state, or the geographer Walter Christaller’s twentieth-century models from the 1930s of the multiplicity of scale of modern human settlements. These more geographically and territorially oriented historical works, and the powerful influence they had on cultivating a sense of identity determined by topography, are implicitly in the background of Lefaivre and Tzonis’ work. Yet we owe to them the application of the word critical to the idea of regionalism, implying in the Kantian sense a movement of self-evaluation and critique. Having emerged more than thirty years ago, the idea of critical regionalism immediately began to define a movement in architectural thought and practice that sought a set of design methods grounded in local particularity. The values evoked in the writings of Tzonis and Lefaivre became one of the most debated rhetorical stances in late modern and contemporary architecture.

As the idea of regionalism was adapted by Kenneth Frampton (1983), it took on a more overt pattern of resistance to the homogenizing influences of capitalistic techno-scientific culture. Drawing on Hannah Arendt’s distinction between the instrumentality of labor and the immanent value of work, Frampton posited critical regionalism as a mediating practice “in which a local culture of architecture is consciously evolved to express opposition to the domination of hegemonic power” (Frampton 1988, p. 56). This more ontological reading – which also draws on the Heideggerian notion of a bounded place-form – might be contrasted with that of Tzonis and Lefaivre, whose approach tends to be more historically focused. Indeed, they have consciously distanced the criticality of their own regionalist thinking from Heideggerian influence, arguing that his “idea of ‘the earth’, ‘the land’ and ‘home’ are inseparably linked with the idea of Volk, a closed human group linked through common ethnic identity, soil and language” (Lefaivre 2003, p. 35). Whereas in their reading Heidegger understood the loosening of these ties to lead to “decadence”, they take the attitude (following Lewis Mumford) that it leads to progress.

In any case, it was the synthetic aspiration of critical regionalism that gained it international recognition, suggesting for many architects and urbanists – especially in developing regions such as India and Latin America – a clear set of principles that could provide a basis for a regionally inflected practice while also being committed to a secular, modernist society and an abstract modernist vocabulary. For instance, such architects as Charles Correa and B. V. Doshi, both Indian, understood Frampton’s critical regionalism as an affirmation of their own locally adapted appropriation of Western modernism. The complexity of the questions raised by such a stance, however, perhaps accounts for the criticism most often leveled against regionalist thinking: that it is unable to account for the blurring of traditional tribal and geographic boundaries, artificially assuming an authentic ethnic homogeneity within cultures. (One might observe in reference to the current work under review that, given these authentic scholarly complexities, it is unfortunate that the format of the book, the imagery, and the editing, does not help to support the seriousness of the overall project.)

A panorama of regionalist directions

Lefaivre and Tzonis’s positivistic employment of the term regionalism exhibits their indebtedness to the American historian and urbanist Lewis Mumford. In Technics and Civilization (1934), Mumford presents the idea of “region” as an intellectual vehicle for thinking through his lasting concern for the future of the city; for the impact of the machine on the individual and the collective; and for architecture’s role in addressing these societal issues. Drawing inspiration from Mumford’s work, Tzonis and Lefaivre in the late 1970s were among the first scholars to write about a new generation of young European architects who sought to express a profound understanding of “place” through their buildings. In deploying the term regionalism, Lefaivre and Tzonis engaged what they perceived as a movement in architecture that reflected a careful evaluation of local identities that were resistant to more doctrinaire approaches. For them, this movement was a continuation of a long succession of architects who “opposed an authoritarian standard and universal approach” and sought alternative ways of making buildings, landscapes and cities that “reassured the particularity of a region, its unique environment and materials, the special character of its culture, and the way of life of its people.”

Positioned within the two great parameters of globalization and regionalism, the authors of Architecture of Regionalism in the Age of Globalization weave together a number of ambitious agendas from their previous work. This latest book is essentially a synoptic narrative of regionalism, touching upon an enormous span of historical themes and case studies – from Vitruvius to the garden-villas of the medieval popes; from the implications of the Treaty of Westphalia to the landscapes of Louis XIV; from eighteenth-century English poetry and landscape design to the French philosophes; or from Pugin’s theories of Gothic architecture to the “moral regionalism” of Ruskin. In addition, the book touches upon more problematic understandings of regionalism, such as its shift away from an objective concern for the division of the earth’s surface to issues of “ethnic emancipation” in the twentieth century.

The book also documents Lefaivre and Tzonis’ lasting concern with architects who approach design through a self-conscious rootedness in local context, as opposed to a mimicking of fashionable international models. The final two chapters, for example, treat regionalism in more recent architectural history, looking at it in relation to the International style and through a series of specific paradigms in such works as Alvar Aalto’s Säynätsalo Town Hall (1952), which established alternative methods for dealing with technology and for embracing a building’s relationship to its site. The authors are particularly interested in the social and environmental significance of Dimitris Pikionis’ Pathway up the Acropolis and the Philopappos Hill (1953). Inspired by the Panathenaic Way, the project overtly treated the natural landscape as an architectural component. It thereby demonstrated the affinities between regionalism and garden design – especially where the natural landscape is perceived as essential for forming and preserving memory and identity – indicating how topography became for Tzonis and Lefaivre an important conceptual device for speaking about contemporary design issues.

The purpose of the authors in providing overviews of such projects is as comprehensive as it is broad: to offer a panorama of regionalist directions in contemporary architecture, without unduly narrowing or codifying the scope of the regionalist impulse. As an introduction to regionalism, the book maintains a strong binary opposition to globalization and the claim that “a flat, global world… leads to a better life.” Yet it also suggests the possibility that the emerging concern for ecological complementarity could serve as a means of mediating this opposition. Following that thread might lead one back to a more extensive engagement with the dilemma suggested by Ricœur, where the advantageous “civilizing forces” of global systems on traditional cultures make it increasingly difficult to work within the fixed polarities of the global and local.

Karla Britton, “A Regionalist Panorama for Architecture and Beyond”, Metropolitics, 30 January 2013. URL : https://metropolitics.org/A-Regionalist-Panorama-for.html

Thibaut de Ruyter & Olivier Gaudin & translated by Oliver @Waine - 12 June 2020
Since the fall of the Wall in November 1989, Berlin has metamorphosed into one of the world’s most popular urban...

Divya Leducq & translated by Oliver @Waine - 11 October 2019
Over the past decade, urban change has accelerated and transformed the physical, social and symbolic landscapes of... 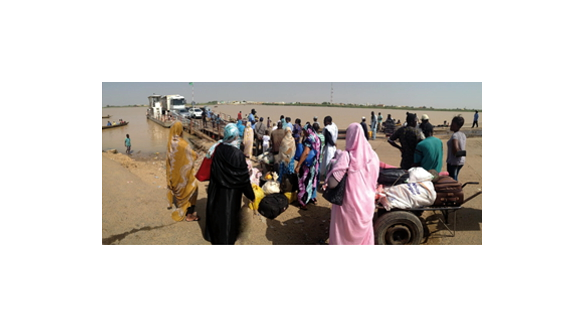