La Visitation is a mid-size housing project (or cité) located in the hilly northern industrial neighborhoods of Marseille, France. From these neighborhoods (“les quartiers du nord de Marseille”), the news is most often about drug-related violence and death. Yet outsiders who gain a closer view of life in the Marseille projects will almost invariably dispute the stereotypes. Along with the poverty and crime that does exist, they will see families from everywhere on the Mediterranean coasts who, as neighbors in the buildings, are trying to create living environments that are safe for their children, often with the help of local and regional agencies of government.

Characterized by persistent high rates of unemployment, almost a quarter of Marseille’s entire population—over 200,000 people—live in the apartment complexes that crenelate the ridges above the city’s north side. Bisected everywhere by highways and tracks, Marseille’s northern housing blocks seem to almost tumble through narrow valleys into the deindustrialized commercial port that extends for miles along the city’s northern seacoast to L’Estaque. With about 600 residents living in four-story walk-up apartments, La Visitation is less densely populated than many others, but it is also one of the more isolated housing blocks, as it is surrounded by factory sites, many abandoned. Like most of the public housing in this part of the city, its population is largely composed of people whose origins are Maghrebian Moslem, Sub‑Saharan African, French of North African birth, and gypsies (including Rom from Eastern Europe and gypsies of Spanish origin).

During a scholarly residence in Marseille at the Mediterranean Institute for Advanced Studies (IMeRA) in 2014–2015, I visited a number of Marseille’s housing projects, where guides pointed me to welcoming places to relax and meet residents who were curious about a New Yorker and often eager to trade tales of city life (Kornblum 2015).

At La Visitation, that welcoming place was a small storefront, recently converted through residents’ initiative into a social and cultural center. Known only as “le local”, it was adjacent to the convenience food store, the only commercial outlet within a 20‑minute walk. The local’s founder and very part-time manager was M. Jean Silva, a young resident of the project, and also a co-founder of We‑Records, a local label featuring young Marseille rappers. I met Jean thanks to Visitation activist Christiane Martinez, whom I met on Marseille urban heritage walks that she led along with members of two exemplary local activist groups, the Hôtel du Nord Cooperative and Ancrage (Jolé 2012). My original mentor in Marseille north-side explorations was Christine Breton, author and cultural conservator with a longstanding expertise in the history and cultural treasures of the deindustrialized neighborhoods of Marseille’s Quartiers Nord (Breton 2015). I also greatly benefited from the tutelage of Marseille urban sociologist Claire Duport, co-author with Marseille sociologist Michele Peraldi and journalist Michele Samson, on the recently published sociology of this rapidly changing French Mediterranean port city (Peraldi, Duport and Samson 2015).

In return for helping me find my “ethnographic spot” at La Visitation, and in the interest of advancing their causes, I offer this video, known in New York’s commercial editing world as a “sizzle piece,” a two-minute attention-grabber. Lacking the time or resources to make a longer documentary, I used videos from my iPhone and iPad, along with stills and Marseille footage available on the Internet. With the help of a professional editor—Noah Benezra at the commercial studios of Rock, Paper, Scissors in Manhattan—we produced a visual piece that has already come to the attention of relevant actors in Marseille.

The video also makes some particular claims about where this housing project is located in Marseille. I wanted to emphasize that La Visitation and other housing projects along the Avenue des Aygalades are dense nodes of population along the urbanized course of a beleaguered mountain stream, the Ruisseau des Aygalades. To assert that La Visitation and the others lie “along Aygalades creek”, as the video does, is to call attention to an essential but neglected aspect of the landscape: the stream that gathers the waters along the slopes of this urbanized watershed. Throughout the city’s northern neighborhoods, there are natural features and ecosystems that also demand attention and restoration.

The restored Ruisseau des Aygalades, for example, will necessarily be part of the larger renewal of urban life in this half of Marseille. This is a point the young people of La Visitation and the activist groups continually assert when they take visitors on walks in the area. This short video highlights their efforts at one Marseille project, La Visitation, but there are many other positive examples of such efforts that will reward the visitor to the rapidly changing city of Marseille. 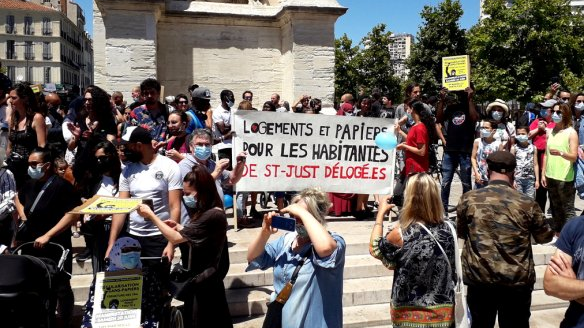 “Welcomed with Closed Arms”: The Everyday Abandonment of Asylum Seekers in Marseille