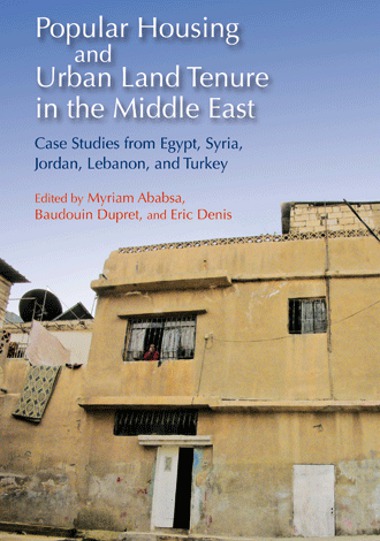 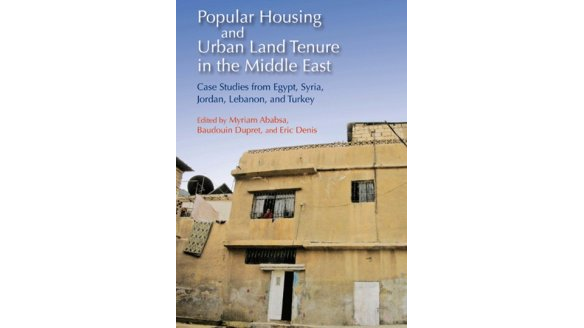 The intricacies of popular housing in the Middle East

It has become customary to claim that the debate on informal land and housing production and exchange is exhausted: the number of publications and dissertations that have addressed this topic has dropped steadily over the past two decades. One might also note the alarmist tone that has often been employed when debating low-income neighborhoods, common to international organizations and the popular press, as well as some academic works (e.g. Mike Davis) in ways that neither do justice to the efforts of city-dwellers nor reflect the multiplicity of conditions that often converge in discussions of working-class neighborhoods.

By contrast, this collection of essays revives a tradition of housing research that invites us to think of “popular housing” (commonly referred to in the English-language literature as “informal housing”) as a rich, dynamic, and changing mode of city-making. The book adopts a methodological focus on the processes that sustain the production of irregular or illegal housing through detailed descriptions of interactions, routines, ordinary day-to-day practices, and everyday mechanisms. A total of thirteen case studies selected from Syria (Damascus and Aleppo), Lebanon (Beirut), Egypt (Cairo), Turkey (Istanbul), and Jordan (Amman) each detail specific moments of this production. Their authors have all spent considerable time in the field, reflecting a grounded approach to developing theory on the basis of rich and specific on-site observations. We find some of the themes that preoccupied scholars throughout the 1990s, with the revival of institutional economics and interest in transaction security reflected in insightful descriptions of property exchanges, particularly in Damascus, Aleppo, and Cairo (Dupret and Ferrier, Ghazzal, and Sejourne). We also find echoes of the earliest concerns with tenure security, dwellers’ strategies to acquire legal standing, and the relations between property ownership, tenure security, and entrepreneurialism (Perouse, Denis, Deboulet). Standards, norms, habits, and laws that shape the making of these neighborhoods are also investigated in several contexts, with insightful reflections on the making of the rules and their spatialization, in particular with regard to architectural forms. Several chapters also take up themes that have been poorly covered in the academic literature, especially those pertaining to the architecture of informal housing, its building technologies, materials, and forms, and how such technologies differentiate but also connect various quarters of the city (Lena, Laue). Others look at public policies vis-à-vis informal settlements in various national contexts and their transformations over the past two decades in relation to local, national, and international factors and policy trends (Ababsa, Deboulet, Denis, Perouse, Clerc). Most of the chapters bring new and rich case studies from a region that has typically suffered from a lack of such detailed research, providing invaluable documentation of the ongoing production of the built environments for the Middle East’s urban populations and inviting a comparative reflection on regional specificities and cross-cultural trends.

Informality as a generalized condition of contemporary urbanization

It is perhaps in its conception of informality (a term that the authors resist using throughout the book, preferring “popular housing” borrowed from the French) as a generalized condition of contemporary urbanization, in the way it is conceived, managed, practiced, and lived, that we find the book’s best contribution. While the book’s two sections display the typical dichotomy where the first is largely dedicated to the strategies of city dwellers and the second to public policy, the construction of the case studies reflects a strong awareness of the need to go beyond the division between a regulator and an irregular population, between state and society, highlighting instead continuities between processes of city-making and transformation—whether they are initiated by dwellers, developers, planners, public agents, or other actors. This is clearly the intention of the editors. They state in the introduction their intent to look beyond the analysis of low-income dwellers’ ability to make the city, and instead establish the “continuum between different modes of action [that] bind ordinary citizens, public agents, and entrepreneurs to one another through their daily interactions” (p. 2). They thus argue that “[i]nstead of the dichotomies pitting permanence against change, public against private, and state against society, it seems more fruitful to adopt an endogenous perspective” (p. 2).

This interaction works both ways. On the one hand, as shown in other regional contexts (e.g. Azuella 1987, De Sousa Santos 1987, Benjamin 2004), the dwellers of popular or irregular neighborhoods strategize and use legal institutions, rules, and systems in ways that respond to their needs for shelter, services, or security. One of the most interesting and recurrent examples in the book documents the work of the public court systems, which play a key role in both Syria and Egypt in securing land transactions in contexts where the production of housing is otherwise considered “illegal” on several fronts. The detailed, step-by-step description of the processes through which property exchange and registration is secured by simulating a conflict resolution process in public courts provides a salient example of the way the court system is a central part of the institutional infrastructure of informal housing production. The case studies offer a multitude of illustrations of the ways in which city-dwellers learn to circumvent, modify, and transform the system to their advantage. The authors repeatedly remind us, however, that rather than interpreting this as “people’s capacities to make the city,” in line with earlier contributions, we should expand our vision to see that these are also cases of cooperation and integration where blurred boundaries make it difficult to discern where the limits of the legal stop, where public assistance is conducted informally and when it is not.

On the other hand, the case studies provide numerous avenues for understanding public policy as necessarily negotiated, transformed, and adapted to the realities of the irregular city where norms and standards are but one (legal and social) fiction. Inconsistencies across and within institutions, adaptations of international programs and policies, and negotiated settlements form the reality of public responses to the strategies of informal settlement dwellers. It is worth recalling here the excellent analysis of the De Soto-inspired tenure regularization policies in Egypt which, we are shown, need to be assessed in relation to their important repercussions on dwellers’ and public agents’ strategies, rather than to the (meager) roster of regularized properties (Denis).

The main contribution of this methodological approach is to reveal the complexity of the urban phenomena and the difficulties encountered when trying to fit such complexities into the categories that are normally used to analyze informal land and housing productions. Chapter after chapter, the case studies reflect a dynamic, hybrid, and unsettled process of urban production that defies efforts to “fix” a particular reality (McCann 2003). Take, for instance, the long-held assumption that tenure regularization engenders security of tenure. As early as 1994, Omar Razzaz had shown that security of tenure could be achieved without urban regularization, and this is again confirmed in several of the case studies described in this volume. However, in today’s neoliberal world, not only is a property title not an asset that can be claimed by the majority of the world’s urban population, but even those who can boast such titles cannot rely on them to secure tenure. This is primarily because the proliferation of urban renewal projects has ushered in a phase of precariousness where a property deed is not enough to trump the demands of capital (Perouse) and where public decision-makers prefer to maintain an informal status quo that could facilitate an eventual displacement should occupied properties become desirable for a particular renewal scheme. This is not to say that titling is entirely irrelevant. Discourses on titling—such as the case of De Soto-inspired interventions, along with others described in the book—remain on the agenda (Denis). We are, however, again invited to distinguish between discourses, policy agendas, and actual strategies on the ground.

Another such complex category distinguishes between multiple population groups, both national and regional, and invites us to reflect on how the management of forced population movements in the region—e.g. Armenians, Palestinians, Iraqis, Syrians—has helped produce different types of human settlements, each with its own legal, social, and spatial conditions. This brings us to reflect on one of the specificities of irregular housing in the context of the Middle East: namely that in several national contexts, it is largely fueled by the context of violent military conflicts over the past century. Indeed, a large percentage of the populations of informal settlements in Lebanon, Jordan, and Syria are cross-border refugees. While Palestinians and Iraqis constitute the bulk of these populations in the chapters of the book, the pattern has been further exacerbated since the text went to press with the devastating refugee movements fleeing the current violence in Syria. Several chapters reflect on the complexity of these conditions, interpreting concerns about titling, for example, among Palestinian refugees in Jordan as a potential threat to national repatriation, but also raising salient questions about possible channels of expression in the absence of a national authority, and the roles that networks of solidarity and forms of know-how play when they extend beyond national borders.

These are but a glimpse of the insights that can be found in this volume. One would, however, have hoped for more comparative analyses of the chapter findings, particularly in relation to a global reflection on informality. If, for example, as the editors argue, we need to step away from Middle-Eastern or Arab exceptionalism, how is the Arab world similar to other case studies? Are there ways in which it differs? How does the methodology proposed succeed in meeting the challenge of theorizing popular housing? And how do these case studies complement our understanding and analysis of earlier edited volumes about informal housing, such as Urban Informality (Roy and AlSayyad 2004), Illegal Cities (Fernandes and Varley 1998), Squatter Citizen: Life in the Urban Third World (Hadoy and Sattherwaite 1989), or Self-Help Housing (Ward 1982)? Finally, one would also have hoped for a more synthetic set of conclusions. Nevertheless, this should not detract from the valuable contribution made by this work, which remains a very welcome addition to an important theoretical debate and a very valuable reference on contemporary urbanization in the Middle East and beyond.