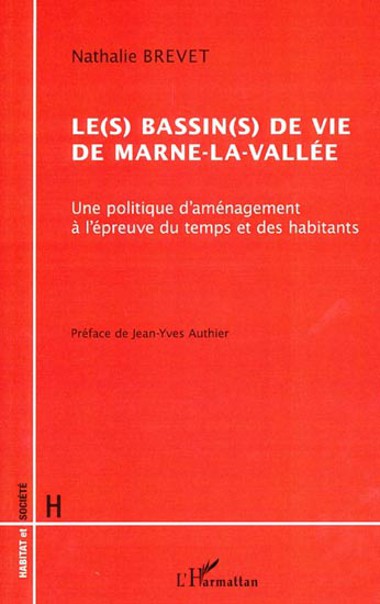 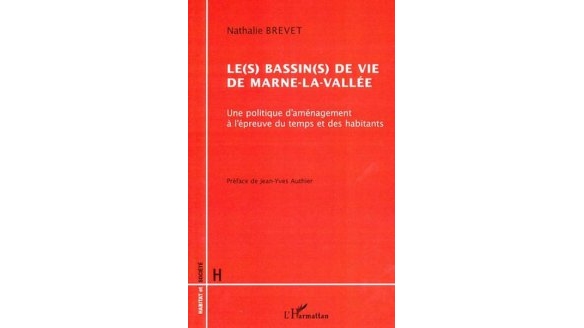 Forty years after their designation, have the five new towns in the Paris region become real towns, as hoped by their creator, Paul Delouvrier (SDAURP 1965)? Or, to put it another way, have they become real places in which to live with their own catchment areas and spheres of influence – places where people can spend their entire residential career, from childhood through to old age (moving out of the family home, setting up home as a couple, establishing a home for one’s own family, growing old), and perform most of their day-to-day activities (work, shopping, socialising, leisure)? This is the question that Nathalie Brevet seeks to answer in an enthralling work devoted to the new town of Marne-la-Vallée, [1] where she lived for seven years and carried out the research for her thesis. The originality of this work lies less in the objective pursued – the evaluation of a specific planning policy – than in the approach adopted by its author. In keeping with other publications on ways of living produced in the fields of sociology and urban geography over the last two decades (Authier 2001; Chalas 2005; Pinson & Thomann 2001), Le(s) bassin(s) de vie de Marne-la-Vallée examines the organisation and internal dynamics of this new town and its role within the Paris region, based on an analysis of mobility practices and residents’ spatial representations.

This work presents three original findings. First, while avoiding a conventional morphofunctional approach focused on changes in housing stock and employment geography, it nonetheless acknowledges the importance of these elements: it shows how the “decentralisation” of business activities, amenities and services from the centre of the metropolis to the outskirts is an essential condition for greater autonomy in terms of living practices in new towns. The results of Nathalie Brevet’s research generally confirm those highlighted by quantitative studies (Saint-Julien & Le Goix 2007), namely a reinforcement of metropolitan polycentrism. Second, unlike many mobility studies, this work considers residential mobility and day-to-day mobility together (work, shopping, leisure, cultural activities). It confirms not only the correlations between these two categories of mobility, but also their convergent role in establishing and defining a means of inhabiting the new town. Finally, the study creates a dialogue between two generally disparate methodologies: on the one hand, the analysis of quantitative data, taken from the French national census of 1999 and the 2005 survey titled Modes de vie en ville nouvelle (“Lifestyles in new towns”) conducted among 1,600 residents of Marne-la-Vallée; [2] and, on the other, the use of an original study involving interviews conducted by Nathalie Brevet with 33 residents of the town. These residents’ responses, liberally cited in the text, illustrate the “cold” statistical trends revealed by the quantitative analyses, and are used to assign residents’ practices and representations a central role in explaining the territorial processes observed.

The emergence of a “living area”

The central argument of Nathalie Brevet’s work can be summed up simply: the residential mobility and day-to-day practices of residents of Marne-la-Vallée are less and less connected to central Paris and mostly take place within the new town; as a result, a true “living area” (in French, “bassin de vie”, i.e. a population “basin” with its own catchment area and sphere of influence) has emerged. The new town is a place where people set down residential roots: resident turnover is slowing down, and the population is stabilising and increasing in average age (due to an ageing of the population and a reduction in average household size). But this setting-down of roots is nonetheless dynamic: for many residents, the various steps of their residential careers all take place within Marne-la-Vallée, thus enabling them to maintain local ties. The structure of the housing market – mainly social and rented housing in the west, and essentially new detached homes for first-time buyers in the east – is conducive to this internal social and spatial mobility within the new town throughout residents’ lives. Moreover, the varied housing stock, together with the presence of good local amenities and services, means that it is possible for residents to stay in the town in their later years. The only cloud on the horizon is the cost of property, which has increased particularly sharply and is consequently an obstacle to setting down residential roots. Some households, without the means necessary to purchase a home within the new town, find their residential career obstructed, with some even considering moving out of Marne-la-Vallée.

For the most part, day-to-day practices confirm this attachment to the new town. Fewer and fewer residents of Marne-la-Vallée work in Paris, having instead been able to find employment opportunities in Seine-et-Marne, [3] where business districts benefit from the “decentralisation” of the Paris job market. Residents do most of their shopping in the town’s large regional retail parks (such as Val d’Europe), which offer a wide range of services. Moreover, as the new town has extensive sports and leisure facilities (leisure complexes, the banks of the Marne, parks and open spaces), it is particularly popular for recreational activities. Even residents’ cultural practices are mainly local (cinemas, theatres and music venues), despite stiff competition from nearby Paris, although residents do not completely abandon the bright lights of the city, with which Marne-la-Vallée has become truly complementary. Three factors can explain the weakening of links with central Paris: first, the gradual attachment of residents, and the relocation of businesses, to the new town (a particularly influential factor for those that both live and work in the town); second, family life and withdrawal into residential spaces, which has the effect of “rooting” inhabitants to the commune (municipality) in which they live; and finally, worsening travel conditions between Marne-la-Vallée and Paris (congestion, rising travel costs), the inconvenience of which is frequently underlined. As a result, for some households, a trip into central Paris becomes a veritable voyage tinged with a certain exoticism.

On the basis of her analysis of residents’ practices, Nathalie Brevet outlines some of the urban planning challenges facing Marne-la-Vallée. According to Brevet, the ageing of the new town’s population will require a better range of targeted housing solutions and improved access to services. Car dependency, which is very high for short journeys within the new town, also seems to call for an improvement in public transport provision, currently very poor. However, the issue of obstacles to establishing residential roots (linked to the rising cost of housing), and the socio-spatial segregation that this produces as a result, could have given rise to a sharper criticism of the particularly liberal housing policies implemented in Val de Bussy (sector 3) and Val d’Europe (sector 4), the two most recent phases of Marne-la-Vallée (Belmessous 2009).

A local territory rooted within the metropolis

Finally, this work contributes significantly to the debate on the emerging city. The attachment of residents to a “living area” challenges the image of a periurban lifestyle based on hypermobility, fragmented territories and the deterritorialisation of living spaces (Chalas & Dubois-Taine 1997). On the contrary, Marne-la-Vallée seems to provide a framework that is conducive to the reconstruction of local territories. It is perhaps on this point in particular that Nathalie Brevet’s argument deserves to be taken seriously, while at the same time also debated: in particular, the notion of “living areas”, suggested a priori rather than justified by the author, is somewhat problematic. Do the mobility practices of residents of Marne-la-Vallée take place within a single gravitational space with well-defined boundaries (Vanier 2007)? The idea of a “living area” or “basin” is probably an oversimplification. While it is true that internal residential movement within Marne-la-Vallée gives meaning to the new town’s territory, the diversity of residential origins – be it from Paris or elsewhere in the Paris region, from elsewhere in France or from abroad – should perhaps not be ignored. Furthermore, day-to-day mobility practices sit awkwardly with the boundaries of the new town, as they mostly take place within a more limited area – namely the municipality or sector (which form sub-zones, according to the author) – as well as further afield in Seine-et-Marne or even Paris.

On this point, the two key conclusions of this work – the weakening of links with central Paris and the importance of local practices – have the effect of glossing over other points, such as the intertwining of mobility practices at different scales, and movements between spaces that are in fact complementary. And yet some of the activities described by inhabitants in the interviews support these latter points – for example, one resident spends her weekends partly in her home municipality of Lagny-sur-Marne, within Marne-la-Vallée (to go to the library and the market, to see friends), but also partly in Paris (to go out for dinner and to see a show). This is no doubt the book’s one sticking point: the diversity of means of inhabiting the new town – something which is very much evident in the extracts of interviews presented – is not adequately put into perspective. One cannot be absolutely certain that the time necessary to establish roots in the new town (or indeed the life cycle as a whole) eliminates inter-individual differences in the way that the author suggests. In the interviews, we learn that age, gender, personal history and uncontrollable elements such as the location or relocation of one’s job can all have an effect on the way residents inhabit and make use of the new town. It is likely that a closer consideration of the scales at which practices take place and of the social diversity of residents would call into question the rigid nature of the notion of a “living area”, by revealing a range of resident profiles: some marked by metropolitan fragmentation, others by local roots and attachments, with others still being something of a hybrid. Nevertheless, Nathalie Brevet’s work provides much food for thought regarding the (relative!) autonomy of new towns and makes a major contribution to urban studies concerning the link between mobility and inhabitancy.

[1] The new town (or, perhaps more accurately, new conurbation) of Marne-la-Vallée, designated in 1969, covers a large area that begins 12 km (7.5 mi.) east of the centre of Paris and stretches some 23 km (14.5 mi.) along the south bank of the River Marne. The new town was intended to be polycentric and was developed in four sectors from west to east: 1. Porte de Paris, the oldest sector, 2. Val Maubuée, 3. Val de Bussy, and 4. Val d’Europe, the most recent sector. Today, Marne-la-Vallée has a population of 291,132 (2009) and a surface area of 152 km² (59 sq. mi.), divided administratively between 27 communes (municipalities), mostly in the département of Seine-et-Marne.

[3] The département of Seine-et-Marne covers the outer eastern suburbs of Paris and includes 86% of the area and 64% of the population of Marne-la-Vallée new town.