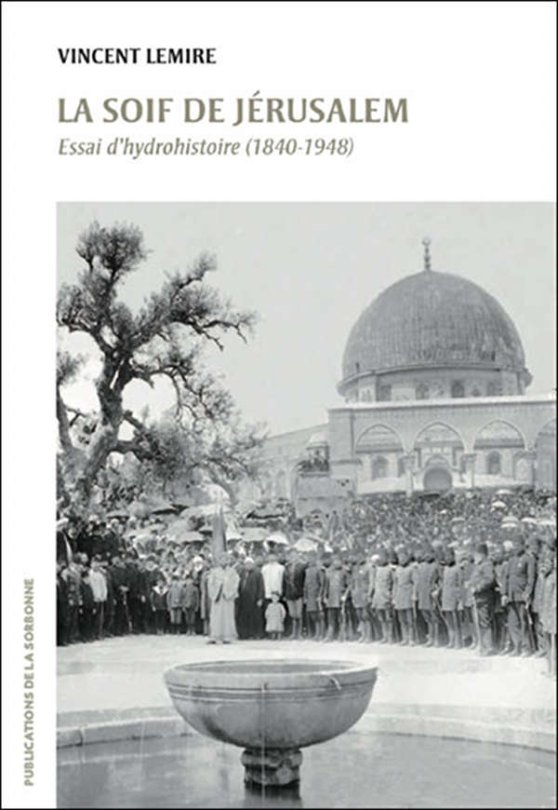 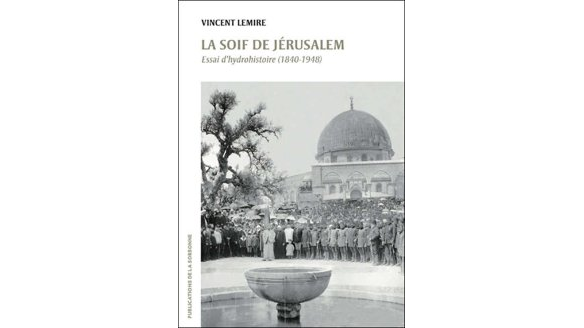 Jerusalem: a history of water

Aude Signoles & translated by Oliver Waine - 29 February 2012
Lire en français
The history of the Holy City is not just one of religious and national conflict. It is also a history of water, a rare and precious commodity in the region, control of which is disputed. In La Soif de Jérusalem (“The Thirst of Jerusalem”), Vincent Lemire recounts this hydrological history and, in the process, develops a stimulating and innovative approach to urban history.
Reviewed: Vincent Lemire. 2010. La soif de Jérusalem. Essai d’hydrohistoire (1840–1948), Paris: Publications de la Sorbonne.
water / Palestine / Israel / Jerusalem
Download PDF

This dense and innovative work by Vincent Lemire – the fruit of a doctorate thesis that is reproduced practically unchanged here – retraces the urban history of Jerusalem via a little-explored medium that is rarely documented by the scientific community: water. By adopting this angle, he demystifies the city’s past by uncovering its secular character in light of the urban utilities networks put in place and the day-to-day actions and issues encountered along the way.

An original approach to Jerusalem: “hydro-history”

Lemire’s work begins in the 1840s, at a time when Jerusalem’s burgeoning urban and demographic growth saw a certain “water obsession” emerge (p. 25), and ends in 1940, when the construction of a “modern” drinking-water distribution system definitively resolved, in technical terms, the issue of “the thirst of Jerusalem”. Retracing the complex interactions of those involved in the management of water resources acts here as an observatory for analysing the socio-political dynamics and processes that are rarely discussed in case studies of Jerusalem, such as the existence of an urban society, with its social codes and leaders, the formation of new social classes and the outbreak of conflicts between them, or the emergence of a local public opinion and of forums for debate. In this way, the reader is encouraged to take a new look at Jerusalem – a city habitually considered in terms of its geopolitical or religious issues – and very clearly demonstrates the relevance of the new historical method espoused by Vincent Lemire: “hydro-history”.

La Soif de Jérusalem is structured around three overlapping historical periods, which enable the author to highlight specific events and turning points. The first period runs from 1840 to 1880 and presents the European travellers, philanthropists and, above all, archaeologists who sought to re-create the “golden age” of biblical Jerusalem through the traces left by the city’s former sources and means of transporting water – what Vincent Lemire charmingly calls “the memory of water”. In the process, these scholars misrepresented the real city by removing numerous aspects of Ottoman history from their descriptions and analyses. This work shows what lay behind travellers’ logs and scientists’ publications at the time, namely the ambiguities of contemporary colonial companies, which mixed financial and speculative reasoning with the rhetoric of charity and religious messianism.

The second period, the “water administration period”, brings to the fore the engineers who were considered the “experts” in water-related matters between 1860 and 1910. In particular, it is the figure of the municipal engineer who emerges from the 1880s onwards, in a context marked both by the demographic and urban expansion of Jerusalem and local authorities’ desire to assert their political sovereignty over the city. The engineer George Franghia, an Ottoman subject of Greek origin, distinguished himself by contributing to the modernisation of Jerusalem’s water network. He addressed the question of water from a purely technical standpoint and, by the same token, worked towards secularising the issue of water by removing all biblical references from evaluation reports concerning the city.

Finally, the third period – the military period (1900–1940) – coincides with the replacement of the Ottoman imperial authorities by British forces, who militarised water management in 1917 in order, first to meet the needs of their occupying troops, and secondly to counterbalance the initial acts of the “water war” (p. 355). This period is marked by the crystallisation of nationalist rhetoric – both Jewish and Palestinian – concerning the water issue: the leaders of the Jewish community and the Zionist movement defended the idea of a physical conquest of the Palestinian territory by taking control of the Jerusalem’s utilities networks. This militantism gradually created a “hydrological split” (p. 475) between the western part of the city, populated mainly by immigrant Jews who had recently arrived in the new neighbourhoods connected to the “modern” water distribution network, and the eastern part of the city, overwhelmingly Arab, whose water supply came almost exclusively from “traditional” means, such as springs, wells and tanks. On the Palestinian side, the gradual Judaisation of the city in demographic and hydrological terms was generally interpreted as a sign of the Zionist movement’s future desire to appropriate Palestine’s land and resources. Indeed, it was over the issue of water that the first assertions of a Palestinian Arab identity emerged among the Palestinian peasantry – as, for example, in 1936, when acts of sabotage were perpetrated against the new Ras al-Ayn pipeline that supplied Jerusalem – and, in particular, the city’s “western” Jewish neighbourhoods – with water.

Vincent Lemire’s research also underlines the existence of a number of elements of continuity in the management of Jerusalem’s water resources. The first of these is the fact that all the parties considered here made some contribution to the water networks, because these networks represented markers in space and time that enabled them to establish more or less hegemonic positions with regard to potential rivals and develop land occupation strategies. In this respect, the constant recourse to the rhetoric of generosity and charity continually dissimulated concerns over control. Secondly, wait-and-see attitudes and “makeshift” solutions were typically the public authorities’ preferred methods of managing the water problem in Jerusalem, despite numerous examples of earnest speeches on the importance of action. The many droughts suffered in Jerusalem over the period studied are particularly interesting, as they reveal decision-making processes that were “lengthy” or “stalled” for a variety of reasons: bureaucratic “red tape”, a lack of political will, long-standing technical problems or a lack of funds. Thirdly, it is striking to note the degree to which Palestine’s shift to “modernity” at the turn of the 20th century went hand in hand with political practices and problems that are still relevant today, such as the manipulation of laws and expert evaluations for political ends; the internationalisation of issues that are, in theory, local; or the question of the commercialisation/taxation of water and its social effects.

A work rich in archival sources

The richness and unique contribution of this work also lies in the archival sources that the author has used, which are not only varied, but in some cases also notable discoveries: Vincent Lemire has made use of handwritten data from the Ottoman archives in Istanbul, as well as from British and French diplomatic collections, organisations and institutions linked to the Zionist movement, Islamic jurisdictions (including those of the Waqf), the Jerusalem city authorities and private donations. His sources also include numerous printed books and brochures, many of which date from the second half of the 19th century and are the work of European scientists, travellers and missionaries. Finally, he studied a large number of press articles, starting in particular with the collections of several journals published between the 1860s and the 1930s. Of all these sources, the ones that make the greatest contribution to the analysis come from the Jerusalem municipal archives – previously unknown to researchers – the extent and documentary potential of which is uncovered here by Vincent Lemire.

Moreover, all these documents enable the author to reveal certain moments in the history of Jerusalem that were hitherto concealed. Many of them are recounted in delectable detail, in a style that invites the reader to travel and explore, and results in an attachment to the “characters” presented. As a result, this dense work is a pure pleasure to read.

The richness of the analysis in this work is also due to the fact that the author constantly compares his sources, even when (as in many cases) they seem theoretically irreconcilable. For example, the section on the project to restore Jerusalem’s southern aqueduct in 1863 reveals truly “divergent sources” (p. 229), with disparities between “descriptions of ruins written by Western explorers” (p. 247), which support the idea of passivity on the part of the Ottoman authorities, and “reports of works recorded by the Ottoman officials” (p. 247), which suggest a regular maintenance of the existing infrastructure. Such “discrepancies” result from the different legacies that those responsible for water policy use to contextualise and legitimise their actions over time. This question of how the city is represented through its “contiguous memories” (p. 25) is, in our opinion, one of the most original aspects of the work.

The ultimate achievement of this work is the fact that it challenges a whole range of misconceptions about Jerusalem, often peddled by Orientalist literature. Indeed, in the writings of European scholars of the second half of the 19th century, the Ottoman management of the city – and particularly that of water infrastructure – is described as non-existent or comprising only decisions that would “stall” the modernisation policies initiated or desired by members of one religion and the political authorities in the Holy Land. However, in this work, a quite different reality becomes apparent: the Ottoman authorities not only demonstrated their capacity for initiative in building or rehabilitating certain water infrastructures in order to meet the water needs of the city, but also developed adaptation skills and management know-how.

Furthermore, the author challenges the traditional view of explaining the political and social situation in Jerusalem through the prism of religion and community only. For instance, he demonstrates that there was no “Muslim confiscation of water resources” (p. 221) of any kind in the Holy City during the Ottoman era, although the Christian and Jewish populations for a long time did not have access to the underground water sources of the holy mosque (or Haram). Similarly, noting that the issue of water can either structure class conflicts or lead to moments of joint celebrations in the city, he argues that there are no “parochial disputes” in Jerusalem and, in addition, reveals an urban society and urban consciousness in the process of being developed. 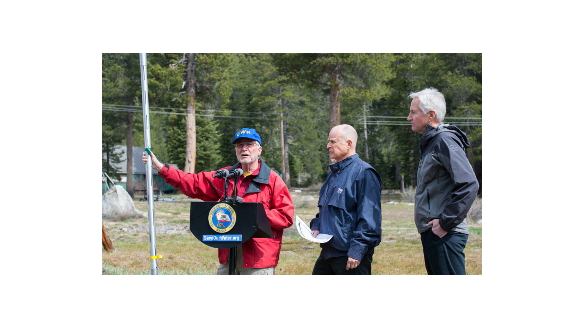 Bare Mountaintops and Thirsty Cities: On California and its Snowpack

Sayd Randle - 29 January 2019
Figuring how to represent the oncoming effects of climate change is a common challenge faced by whistleblowers and... 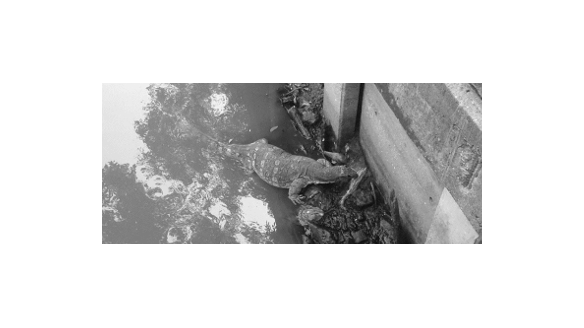 Leonie Tuitjer - 10 April 2018
When the city of Bangkok flooded following tropical storms in 2011, an altered urban waterscape erased the neat... 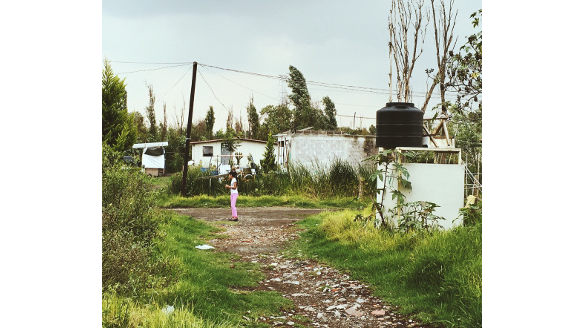 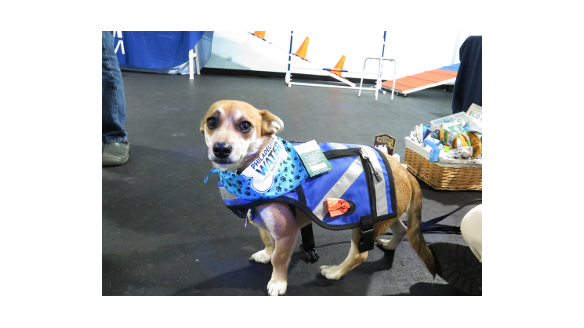 Institutional Roadblocks to Achieving Environmental Justice Through Public Participation: The...

Rebekah Breitzer - 24 January 2018
Rather than meaningfully involving representatives of environmental-justice communities in decisions about the... 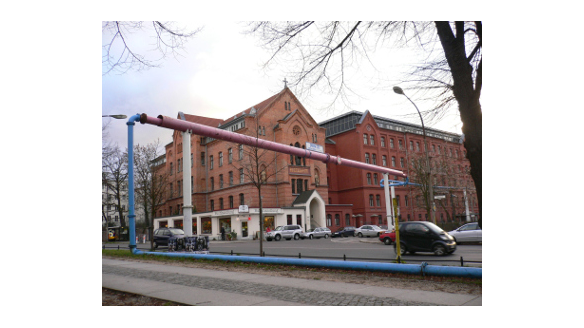 Shrinking Networks, Growing Solidarities? How to Design a New Social and Territorial...

Daniel Florentin - 27 September 2017
Utilities operators in a number of European cities, faced with significant reductions in consumption levels across...