Inciting Hopes for the Future: Civic Activism in London, Mumbai, and Paris Amid the Covid‑19 Crisis

Our current global “human, economic and social crisis” (UN 2020) was driven by a deadly virus and deepened by governments’ dedication to market-oriented solutions and to disempowering people deemed to be obstacles to those solutions. The neoliberal state’s initial reactions to the coronavirus were denial and delay followed by sudden U‑turns and acting on short and no notice. On the heels of a decade-long policy of austerity, groups including the poor and immigrants suffered more from the impacts of the pandemic. To fill the vacuum left by the state’s withdrawal, civic associations in cities across the world stepped in, with a commitment to extending aid to those hit hardest by the crisis. Following a call by Les Back (2020) to mobilize hope in uncertain times by attending to the nature of the social damage and the emergent forces that oppose that damage, this paper focuses on civic activism targeting socially excluded groups amid the Covid‑19 crisis.

The state’s failure to respond immediately and effectively to the pandemic, evident in belated lockdowns, has introduced emergency and unpredictability as the new normal. The initial lack of control over the global pandemic has intensified feelings of hopelessness, particularly for those already suffering from deprivation, exclusion, and despair. Civic activism has therefore become even more crucial in terms of making the future imaginable again for those trapped in the present.

In this paper, we present preliminary insights from three cases where civic activism dressed the wound of state absence amid the first rounds of lockdown, and examine the solidarity built by three civic associations: (1) P’tits Dej’s Solidaires in Paris, which works with homeless individuals and trapped migrants; (2) Yodha Pratishthan in Mumbai, which works with slum dwellers belonging to the lowest caste; and (3) Shpresa Programme in London, which works with unaccompanied young asylum seekers. Despite their qualitative differences, the common ground for the three groups of interlocutors is social exclusion: “being pushed to the edge of society and prevented from participating fully by virtue of poverty or lack of basic competencies and lifelong learning opportunities, or as a result of discrimination” (EC 2010, p. 7). The focus on social exclusion, rather than poverty, addresses the simultaneity of deepening economic deprivation amid neoliberalism, and ethnic and racial iniquities shaped by colonial histories.

We conducted more than four months of fieldwork following the first phase of lockdown. This paper draws from observations and interviews with a migrant solidarity group in the 18th arrondissement (city district) of Paris; in the slum neighborhood of Ramabai Nagar, Mumbai; and observation of virtual public events and diary entries of asylum-seeking young adults dispersed across London. We show how civic activists have intervened in the present order, shaped by lockdowns and state apathy, and have contributed to the political imagination of their most marginalized interlocutors by inciting collective visions of hope.

We use hope not as a static concept oriented at a specific object (Jansen 2016, p. 448), such as self-improvement inherent in neoliberal moralizing, but rather as something intransitive that allows for the interpretation of a range of possibilities concerning the future. It entails a collective vision of social betterment and therefore differs from individual aspirations often promoted by dominant policy discourses. Such focus on hope as a collective vision is important within the framework of the populist turn in neoliberalism that helps normalize exclusionary notions of community, belonging, and citizenship.

Activism amid the lockdown

The association P’tits Dej’s Solidaires was created in 2015 during what has come to be known as the “European migrant crisis,” a time when refugees settled camps all over the 18th and 19th arrondissements of Paris. In opposition to feelings of hatred and fear that emerged during municipal public meetings, some residents started to meet in front of a public park every morning to help migrants with basic needs and talk with them (see Figure 1). Over time, recently-settled migrants were gradually replaced with local homeless people, “trapped” migrants waiting for an opportunity to reach the UK, and crack-cocaine users. Owing to their nonhierarchical organization, the activists were able to continue their everyday activities amid the pandemic and recruit new, younger activists to replace older volunteers who had to stay at home during lockdown. By providing regular breakfasts, these activists played a crucial role during the Covid‑19 crisis in reaching out to people neglected by state welfare policies and in showing frightened neighbors that migrants and other socially excluded populations should be treated as equals.

Figure 1. Jardins d’Éole, 18th arrondissement, Paris, April 26, 2020: the ethnographer as a volunteer preparing for food distribution in the early morning 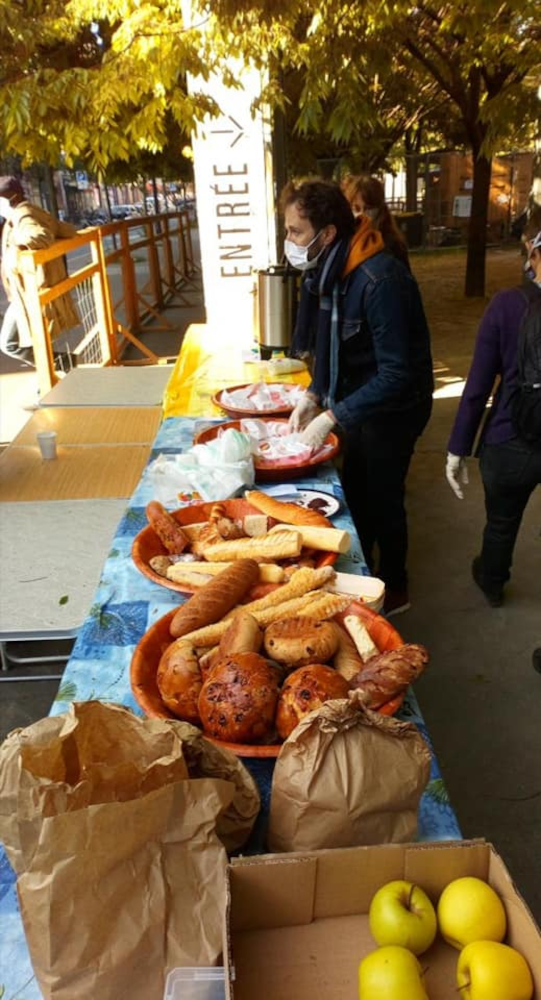 In Ramabai Nagar, a predominantly Dalit neighborhood in Mumbai that signifies a space of protest due to its Ambedkarite orientations, the community organization Yoddha Pratishthan (YP) works with other associations to construct an emancipatory space1 that is opposed to mainstream Hindu symbolism (caste order and superstition). The pandemic, coupled with the announcement of a lockdown, accentuated the extreme alienation that the Dalits residing in Ramabai already faced. YP provided a link between the authorities and the community, and with the help of its networks mobilized resources and funds to help in case of infection, quarantine, and a need for blood and medicine (see Figure 2). Having instilled confidence and a feeling of worth among the community at Ramabai Nagar, YP activists emerged as their first point of contact—rather than their elected representatives—in their hour of need. 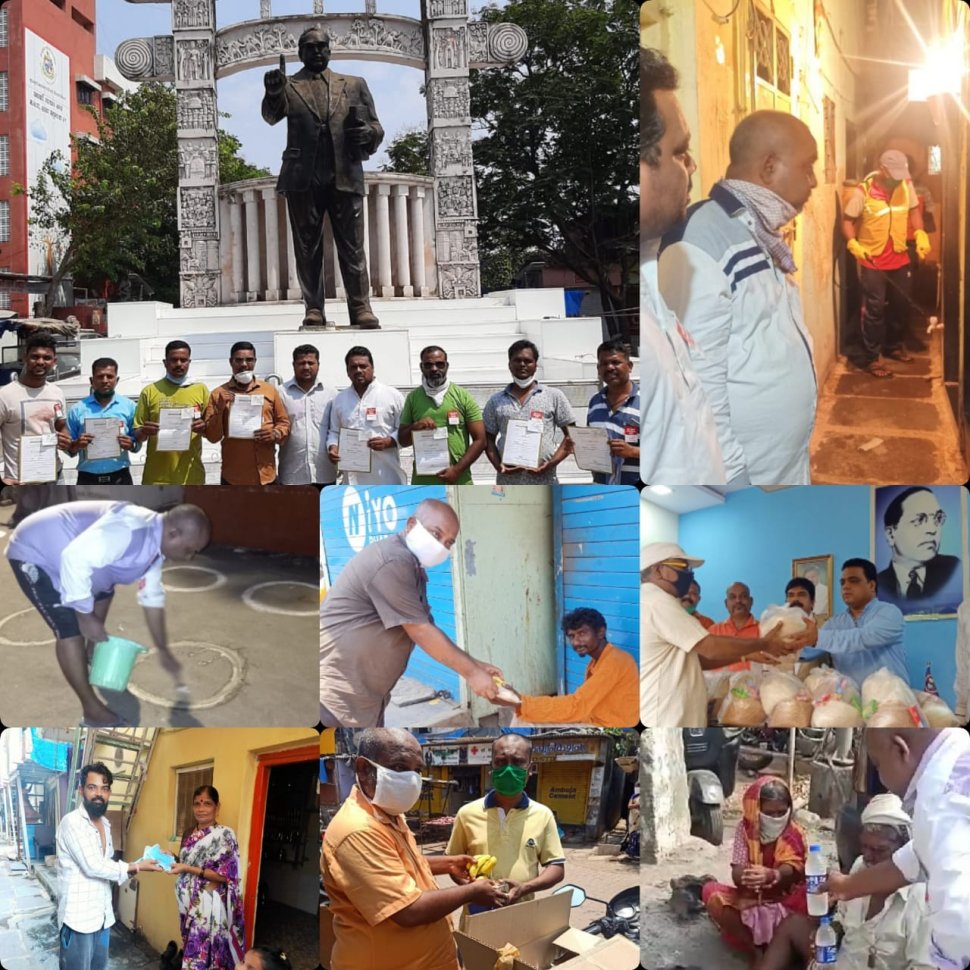 Shpresa Programme (SP) in London is a user-led organization that has worked towards building active participation of refugees, migrants, and asylum-seekers within the broader society for over two decades, and has developed a close-knit community of committed activists and strong partnerships. It was able to build on these relationships to introduce emergency fundraising at the beginning of lockdown, with which they provided laptops, tablets, and computers collected through donations, and delivered food, clothes, and cash. To mitigate the isolating effects of the lockdown, they also immediately moved their activities, training sessions, and counseling sessions online. To keep users connected and engaged, SP introduced telephone befriending and storytelling, in which the users received an audio or video call from a volunteer on a regular basis.

The overlapping trajectory underpinning the three associations’ activism was the shared aim of cultivating the sentiment of “we matter” amid the vacuum of the state. By creating a sense of connectedness in a shared space—territorial (Paris), virtual (London), and community-driven (Mumbai)—these associations contributed to lessening the feelings of spatial and temporal entrapment and making the future relevant again for their socially excluded interlocutors. By acknowledging their interlocutors as equally entitled to presence, community, and space, the activists offered a “sense of possibility” (Jansen 2016, p. 456).

For the beneficiaries in the 18th and 19th arrondissements of Paris, the social concern and care they could find at the same place every morning was as vital as the material support. Every morning in front of a public park, members of a “suspect population” could discuss the news, criticize local politics, and build friendships, offering glimpses of an alternative vision of the community. Regular beneficiaries could meet their favorite volunteer and strengthen a link that could have ceased during lockdown. “Demba please! Eat something today! Don’t do as you do as every day! Have a piece of cake,” Marion would plead with Demba, a young Guinean drug user who had been living on the streets for three years.

Yodha Pratishthan activists were more reliable for Ambedkarite residents of Ramabai Nagar than the state during times of crisis. When residents were quarantined, they trusted YP volunteers more than elected representatives and municipal authorities. They responded to YP’s willingness to enlist local residents as equal participants in grappling with the pandemic. Local residents felt that they were active agents helping others as well as being assisted by others. Jayawant Hire, an Ambedkarite, shared:

Organizations like YP helped us come together and actively put forth combined efforts. As the numbers of cases have begun to decrease and supplies of necessities are becoming relatively regularized, the residents here feel in control of the situation and are now hopeful of rebuilding their lives in the new circumstances created by the pandemic.

For the asylum-seeking young adults, the Sphresa Programme’s befriending project and online events provided a shield against the re‑traumatizing character of the lockdown (see Figure 3). SP activists’ enduring commitment made the future thinkable again, as was expressed in the diary entry below by a young boy:

A lot of times we feel a strong wind but all of you helped turn these windy bad days into sunny mornings. I’ll be telling my kids about all the amazing people like you.

Figure 3. Artwork by a young asylum-seeking adult that was shared during an online event at York Refugee Week, June 18, 2020 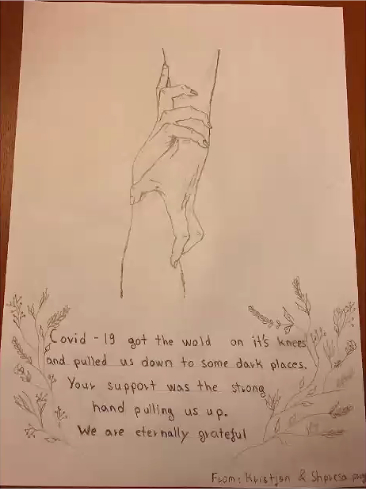 Similarly, the virus was a reminder for Alin, a 20-year-old girl living in a room of a temporary accommodation, of the hostile environment toward “foreigners” which she knew already existed, but which became more explicit with the virus. SP activists inspired her to “choose to be a positive impact on whoever she speaks to.” Thus, she concluded, the hope lies in “people for people” (interview, May 7, 2020; emphasis added).

The activism of the three associations proved reliable in filling the void of the state for the socially excluded and inciting their aspirations to engage with and contribute to society. Although inequities and discriminatory structures were maintained, and some expectations remained unfulfilled, the activists opened up possibilities within the present order by creating an inclusive urban public place (P’tits Dej’s Solidaires), a virtual space where the lockdown-driven traumas of asylum seekers are considered as a public problem (Sphresa Programme), and an emancipatory place in which public services and minimum insurances to cope with the pandemic and state apathy are mobilized and distributed (Yodha Pratishthan).

Acknowledgments This paper emerged as part of a research project, “Citizenship Futures – The Politics of Hope,” that focuses on social exclusion, hope and citizenship in Paris, Mumbai, and London. Website: www.york.ac.uk/politics/research/current-projects/citizenship-futures.