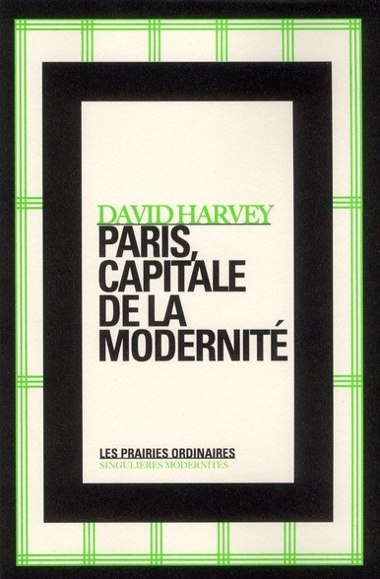 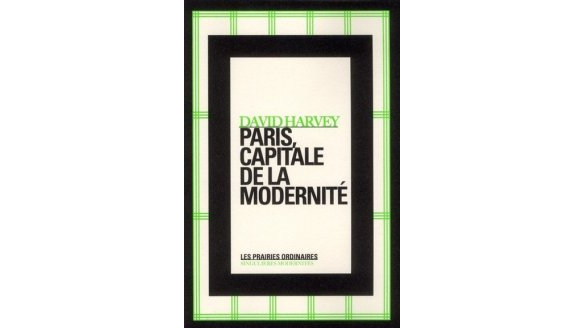 Haussmann: from modernity to revolution

In the tumultuous period of Paris’s history that extends from the barricades of 1848 to the bloody repression of the Commune in 1871, profound transformations occurred that are often reduced to technical and economic aspects of the Industrial Revolution. David Harvey, in his impressive work, focuses instead on Haussmannian urbanism, imperial politics and class relations. Haussmann is at the centre of the action, and Marx is at the heart of his analysis of events. Historical-geographical materialism and a “global” view of Paris during the Second Empire support the key thesis of this book: that the political, economic, urban and social changes of these decades not only opened the door to modernity, but also produced the Commune and its disastrous downfall.

A global and Marxist vision of Haussmann’s Paris

David Harvey re-examines a period of history that has already been extensively charted, analysed and interpreted; however, he brings his own vision and his own method of interpretation, based on an exhaustive and well-documented history, in order to defend original ideas and, in inimitable style, dispel certain overly persistent myths.

The author has been producing works on cities for many years now, all of major significance. This book is not, therefore, a work that has been created from scratch: the heart of the book (the extensive second part) is a “revised and expanded” version of the third part of an earlier work (Harvey 1985), while the third and final part, “Coda”, on the Sacré-Cœur basilica, is largely taken from two publications from 2001 and 2002 respectively. The key originality of this publication is that it provides a comprehensive historical-geographical panorama, in French, that supports the vision of the author.

Harvey’s analysis is inspired by Marxism, but highly personalised. He is suspicious of abstraction, over-simplistic causal links and determinism, and so re-uses his method of “historical-geographical materialism”. The movement of capital and class conflicts are leitmotivs. This is clearly a vision that depends on the author’s own choices. Like any vision, its value lies in what it enables us to understand, regardless of any preconceptions. No vision is completely objective; this particular vision opens up especially stimulating perspectives.

In this context, the author’s goal is to show and try to understand the city in its entirety, and the transformation of the city in all its complexity, along the lines of put forward by Carl Schorske (1983) and Walter Benjamin (1989). To achieve this aim, he does not stop at the narrow and subtle combination of political, economic and social dimensions; to reveal and understand what was emerging, he integrates representations, imagery and imagination, dreams, literature, paintings and utopian thinking into this tableau. Flaubert, Balzac, Baudelaire, Courbet, Hugo and Zola are widely cited, as well as Saint-Simon, Fourier and Proudhon. An entire chapter, even, is dedicated to the Balzacian vision of Paris and class relations in the French capital – an approach that offers a fine illustration of complexity according to Edgar Morin: everything depends on everything, and singling out any one aspect is simplistic and dangerous.

A book as rich and varied as this can not be summarised. Everything is important: events, conflicts, thoughts, conceptions of the city, ideologies. Everything contributes to a complex global vision, yet from which simple conclusions emerge. Armed with his method, his desire for comprehensiveness, the will to take on this complexity, and an impressive array of documentation, David Harvey presents an original analysis, where different viewpoints are challenged and where overly simplistic judgements are nuanced or broken down. With this in mind, the main idea behind Harvey’s work is that while the radical transformations of Paris – essentially the result of Louis-Napoléon Bonaparte’s desires and Baron Haussmann’s actions – did open the door to modernity, they also created, through their social consequences, the conditions for the revolution of 1871: “[T]he raw materials for the Commune were put together by the slow rhythms of the capitalist transformation of the city’s historical geography” (p. 484 in the French edition). The author considers the urban transformations as “creative destruction”, and the entire period as a “ferocious farce” that was to have a dramatic ending in 1871.

On the subject of modernity, the author remains succinct: “[I]f modernity exists as a meaningful term, it signals some decisive moments of creative destruction” (p. 21) – destruction not only of the old and often insalubrious Paris, leaving a sense of loss (discussed notably by Émile Zola and Jules Ferry), but also of social structures; the creation of the Paris of wide boulevards and running water (although the distribution network was far from complete) as well as the emergence of new socio-spatial structures, the reign of money, profit, speculation, and the commodity fetish and department stores; and, above all, the emergence of financial reforms, partly through the action of the Pereire brothers, and without which “the transformation [of the city] simply could not have progressed at the pace it did” (p. 193).

But modernity as a radical break is a myth, defended by Haussmann to justify and promote his action. The break he orchestrated with the support of the Emperor was not absolute. The major works of 1853 onwards were preceded by a number of projects as early as the 1840s, although admittedly few of them succeeded. The grand ideas and awareness of the working classes date from before 1848; Louis-Napoléon Bonaparte was much taken with the industrialist ideas of Saint-Simon. So, might it not be more accurate to describe this “break” as a “key turning point” instead? What did change after 1848 was the scale of the project (Paris in its entirety) and its coherence. It was also the emergence of an exacerbated capitalism, which was both necessary for the works programme – and so supported by the state – and encouraged by the new urban forms. The state relied on a capitalism whose growing power would ultimately jeopardise its own power.

A “ferocious farce” that paved the way for the Commune

In this context, Harvey retraces urban history in the light of a principle that Haussmann had understood all too well: controlling urban space also means controlling social reproduction. During this period, the rebuilding of Paris led in particular to a growing socio-spatial segregation, owing to the speculative rise in rents that exiled the poorest to the outskirts or even in the slums that had developed in the centre of the city. Gradually, this dual social opposition, still present today – between the centre and the suburbs on the one hand, and between the east and west of the Paris urban area on the other – appeared and increased. This airtight spatial segregation fostered a reproduction of social classes that continues today through “self-segregation”. During the two decades of the Empire, social inequality itself increased and its disastrous consequences in terms of poverty and unstable living conditions are well known. Workers had barely enough resources to meet their immediate needs, let alone long-term needs (children, education). Women were grossly exploited and underpaid. Segregation marginalised the poor and “protected the bourgeoisie from the real or imagined dangers of the dangerous and criminal classes” (p. 237). If we add to this the simplistic representations conveyed by the bourgeoisie – fear and rejection of the dangerous classes, the poor and the “Reds”, considered barbarians or even animals – we understand how “the reoccupation of central Paris by the popular classes – the descent from Belleville – took on such symbolic importance” (p. 431). The author recalls that “honest citizens led by Thiers” (p. 480) wanted the total and definitive disappearance of the “Reds” just as much as the fall of the Empire.

At the same time, variations in land prices led to a segregation of economic functions and a concentration of shops, services and finance houses in the affluent areas of central Paris, with large industrial companies relegated to the periphery. In passing, Harvey also refutes the entrenched myth of the superiority of large firms due to economies of scale. He cites as evidence the proliferation in central areas of small firms that survive through improved productivity and greater efficiency; but here a more detailed study would be required to take into account the nature of the goods produced. The spatial reconstruction of Paris is also reflected in an growing separation between home and workplace, prefiguring the current division of the two.

The city centre, with its department stores, monuments and boulevards became a showcase of capitalism and goods for the benefit of only a few (a phenomenon referred to by Baudelaire in “The Eyes of the Poor”, in Paris Spleen). The same need to show off the power of capitalism today produces the uncontrolled sprawl of shopping malls and the insolent, limitless verticality of office towers.

But in conjunction with these spatial transformations, class alliances, the political choices of both the Emperor and Haussmann, and other factors contributed to the chain of events that followed – factors such as Thiers’s fierce hatred for the “Reds”, whom he had already conquered in 1848; the tyranny of capital and money; and the growing power of financiers, whose role was crucial in the movement of capital necessary to achieve Haussmann’s works. Finally, one must not forget the context of the war and the humiliation of capitulation to the Prussians in March 1871.

All these elements sowed the seeds for the uprising of the Communards, the dramatic failure of which (several tens of thousands of deaths on the barricades and in summary executions) in June 1871 was almost certainly a result of the premature nature of this revolution and of a workers’ organisation that was still too fragile to combat the reactionary forces.

A moral to the story

The final part of this historical epic, “Coda”, forms a sort of moral of the story. Harvey shows how, after years of delays, the construction of the Basilica of the Sacred Heart – better known as Sacré-Cœur in Montmartre – ultimately secured the victory of the forces of reaction and the alliance between conservative Catholics and monarchists. The cult of the Sacred Heart was the “rallying cry for all forms of conservative opposition” (p. 494). The basilica was built explicitly to the memory of two generals killed by the Communards. By a strange coincidence, it was precisely in Montmartre that Eugène Varlin, one of the key figures of the Commune, was tortured and killed by the Versaillais in 1871.

Danièle Voldman & translated by Oliver Waine - 17 April 2020
In France, the professions of social worker and concierge both emerged in the early 20th century, and both...