Depending on a Curse: What History Tells Us About Property-Tax Reform in New York City

For decades, New York’s local government has inflicted upon its people both discriminatory policies and discriminatory taxes. This discrimination takes two forms. On the one hand, New York taxes different classes of property at different rates. Single-family homes made up 51.27% of the city’s market values in the 2021/2022 fiscal year, but comprised only 8.8% of the city’s assessed tax revenue. Multifamily units, on the other hand, made up only 24.69% of the city’s market share, but comprised a whopping 39.44% of the city’s assessed tax revenue. Since rental landlords often pass these taxes onto their tenants, and since renters are generally poorer and more likely to be nonwhite compared to owners, this policy reproduces and entrenches metropolitan inequality while adding to its housing crisis.

For decades, advocates have demanded that New York City’s property-tax system be reformed. Comprehensive tax reform is on the table in the city today in the wake of a report by a respected advisory commission. But can a tax system as cumbersome as New York’s possibly be changed? And even if it can, what unanticipated consequences might follow?

History provides some answers. During the (first) Gilded Age, New York’s property-tax system was every bit as discriminatory as today’s. And just like today, advocates targeted this system for reform—reforms which were met with surprising successes in the early 1900s. But these successes bore contradictory fruit. If activists and policymakers are to learn from their predecessors’ mistakes, we must recognize that erecting a progressive public-finance system atop a regressive economy is profoundly self-defeating. Our goal must not be to tax real-estate speculation, but to eliminate it.

Property taxes in 19th-century New York City discriminated against anyone unlucky enough not to own land. This discrimination flowed from a widespread practice by public tax assessors to appraise land at roughly 30% to 50% of its market value, while assessing structures upon that land at full market value (Purdy 1948; MacCracken 1908). This practice rewarded property owners for keeping land vacant while penalizing small home-builders, manufacturers, and anyone else hoping to make actual use out of that land. It encouraged destructive real-estate speculation while hobbling New York’s “real” economy. And, most egregiously, it subsidized unproductive rentiers while burdening working-class property owners—and by extension, their working-class tenants.

Following New York’s fiscal crisis of the 1870s, the political economist Henry George proposed a reform that he believed would end discriminatory taxation and real-estate speculation in a single stroke (Figure 1). By levying heavy taxes upon land and removing them from improvements upon the land, he argued, the public sector could make it profitless for speculators to hold land idle. In doing so, it would force landlords to either construct productive enterprises upon their property in the hope of some kind of profit, or sell their land to those who would. Land-value taxation would thus revive New York’s economy, encourage the erection of new housing, and enable small homeowners to avoid onerous taxes. 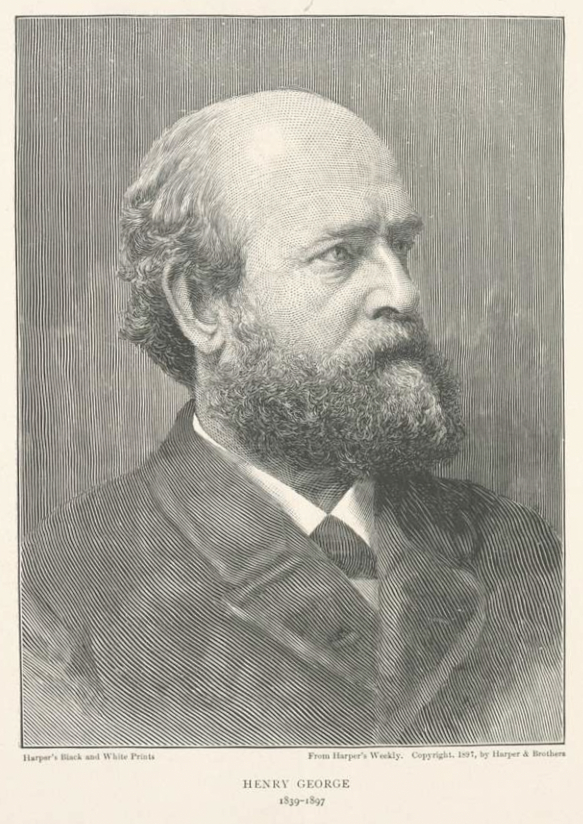 George’s solution appealed to a wide variety of constituencies: home-builders and manufacturers angry at high taxes, tenants and small-business owners angry at high rents, and developers angry at the high costs of land; and their campaigns for tax reform soon won success. In 1902, following years of pressure by the Georgist-inflected New York Tax Reform Association, New York reformed its assessment practices so as to assess the city’s land at 100% of its market value (Figure 2). While New York maintained a low tax rate upon that land, this nonetheless enhanced the city’s tax revenue by an extraordinary 42% at a stroke while reducing fiscal discrimination against working-class homeowners and tenants.

Figure 2. Course of full values of real estate since consolidation 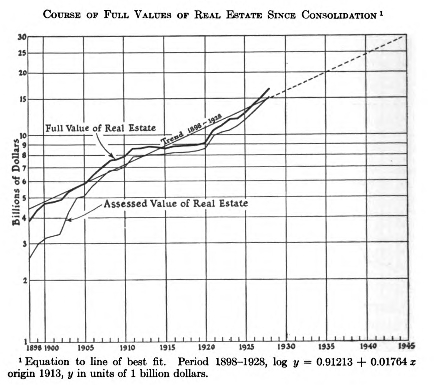 This success was followed by another. In 1906, the prominent Georgist Lawson Purdy (Figure 3) was appointed president of New York City’s Tax Department—a position he would hold for 11 years. Purdy published the city’s tax maps and appraisal methodology to make it easier for citizens to understand—and, if necessary, contest—the Department’s operations. And through it all, he and his successors kept up Henry George’s approach of levying heavy taxes on land. 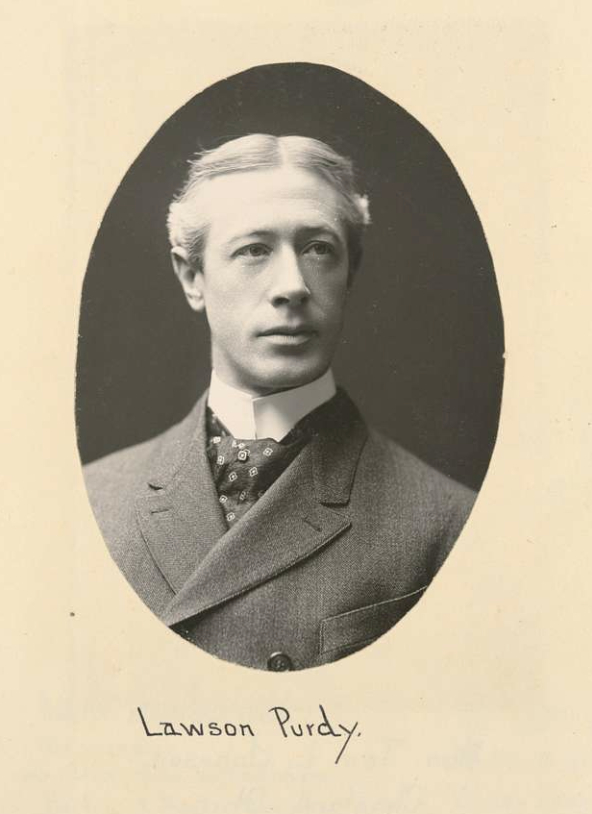 Larger landlords were understandably alarmed. In 1910, the Real Estate Record declared that “New York, probably more than any city in the world, has been the paradise of the real-estate speculator and operator, of the man who buys real estate not for the purpose of improving it but for the purpose of appropriating probable increase in value” (p. 979). The effects of a full land-value tax upon this condition, it stated, would be “revolutionary.”

Despite the Real Estate Record’s fears, however, New York’s tax reformers shared a similar goal with them: to raise the value of real estate. After all, if a city was to “raise practically all its revenues by taxing real-estate values,” as the Georgist-influenced Tax Reform Commission of Pittsburgh claimed in 1916, then “...steps must be taken to prevent the needless destruction of those values and to stabilize and promote their increase in every way possible” (p. 20). In New York City, tax officials and planners would follow this chilling directive—“in every way possible”—to the letter. And by linking the city’s prosperity to a regressive industry, New Yorkers themselves would pay in more ways than one.

On the one hand, New York’s drive to raise realty values for tax purposes encouraged rather than restrained speculative land fever. Tax officials assessed land at the value they believed the parcel could be worth under the best of circumstances—assessments which landlords welcomed as imprimaturs for the speculative prices at which they hoped to sell their property. Tax officers promoted the rapid expansion of the city, including through debt-financed transit lines, on the grounds that opening new land for development would swiftly create new taxable values for the city. Whether demand actually existed for these new structures was less a concern for the city than raising the revenue needed to pay its workforce and creditors. As one tax reformer later stated, if New York “could not abolish speculative values and still collect taxes on speculative values […] then many city officials would rather collect than abolish” (Buttenheim 1935, p. 8).

On the other hand, New York’s land-based fiscal strategy undermined the equity it was meant to establish. Zoning policies adopted by the city to “stabilize and promote” realty values excluded working-class industries and populations whom local officials considered detrimental to those values. Thousands of working-class tenants were displaced by what Charles Abrams called the “bludgeon of a tax levy,” which encouraged tenement owners to sell their properties for “higher and better” uses—largely office towers and expensive apartments. And because New York depended upon private realty for revenue, the city resisted public housing initiatives on the grounds that it would remove realty from the tax rolls. As Abrams continued, “Against the social welfare of its inhabitants, the city (is) compelled to weigh the tax income that flowed from large areas of slums.”

It was not until the 1930s that New York turned away from placing heavy taxes on land as a general fiscal policy. The Depression seemed to demonstrate that heavy taxes on land—contrary to Georgist theory—could be an obstacle rather than an impetus toward growth. Just as high tax rates on land gave real-estate speculators unwarranted confidence during “boom” years, they made land prices prohibitively expensive for developers during “bust” years. In 1938, the new president of New York’s Tax Department complained that “assessed valuations on land [had] reached a point where the owners could not develop the property successfully, and builders would not buy the land because of their inability to produce a revenue from the intended improvements on such high-priced land” (Abrams 1939, p. 74).

By the postwar era, New York tax officials preferred to use the carrot of low taxes, rather than the stick of heavy taxes on land, as a means of encouraging growth in their city. Whereas New York realty was generally overassessed in the 1930s, by 1960 the city’s real estate was assessed at only 80% of its value: a percentage that would decline to 48% by 1975 (today the rate is roughly 20%) (Moody 2007, p. 48). Homeowners especially were favored in this new fiscal regime, as were the developers and owners of expensive offices and residences (the infamous 421-a program began in 1971) (Moscow 1948, p. 339). For working-class and nonwhite property owners and tenants, however, discrimination remained—and remains—the law of the land.

The story of tax reform in New York City shows the limits of placing progressive levies on regressive actors. By relying upon realty for revenue, New York gave realty owners a “strategic position” in local politics, to use the words of left-leaning planner Rexford Tugwell (Tugwell 1942, p. 32). And, all too often, New York planners ceded to the prejudices of these owners, and encouraged their injustices, in the hope that taxing them would compensate for their abuses. But it never did.

This is not to say that radical tax reform is not desperately needed in this city now. We need to uproot the discrimination baked into the spirit and law of our tax system. But in capturing New York’s landed wealth, we must not be captured by that wealth—a “resource curse” if there ever was one. Unless we use our tax system to dismantle and not merely draw from New York’s most powerful real-estate empires, and unless we use that revenue to place our city’s finances on more progressive footing, our fiscal cures will reproduce the disease.

Daniel Wortel-London, “Depending on a Curse: What History Tells Us About Property-Tax Reform in New York City”, Metropolitics, 12 July 2022. URL : https://metropolitics.org/Depending-on-a-Curse-What-History-Tells-Us-About-Property-Tax-Reform-in-New.html